Playing The Legend of the Five Rings RPG

Being A Samurai with the One-Shot Podcast Crew

Me and some of my friends got to play a one shot led by World Renowned Nipponese Steel-Folder and all-around nice guy Jim McClure.

Legend of the Five Rings (also L5R) is a roleplaying system that is very deep and complex, and like all good systems out there it captures exactly what it aims to emulate. It's not a system that I would recommend for newbies, but anyone looking for a sophomore excursion into new systems will be well equipped to handle L5R. Every rule supports and expands upon the setting, while the setting reinforces and adds structure to the narrative, and the narrative drives the neccesary mechanics as the players choose how to solve crises. Often this interconnectivity of setting-mechanics-narrative is taken for granted, and sometimes even ignored in other systems, but it is a central component of L5R. 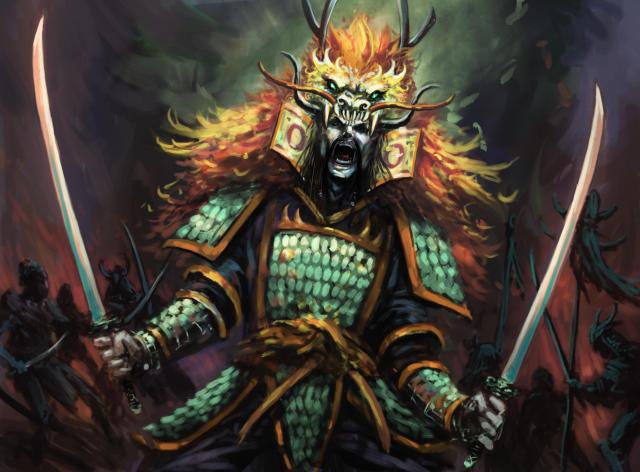 Legend of the Five Rings: Where there's a samurai type for all types of players

To better appreciate how L5R nestles itself at the crux of the Crunch and Fluff, it's helpful to keep in mind the reasons that design decisions shape the games we pay:

Rules lite systems boil everything down to a small handful of dice in order to minimize the intrusion of the rules on the narrative. This can be seen in games like Dungeon World or Everyone is John. By allowing the players more control over their character's actions a more freeform roleplay can be developed. I've had sessions of DW where an hour has passed without anyone having to pick up dice, just because the players were rocking the roleplay so hard that I felt forcing a check would have been a disservice to the narrative and the actuality of fun that everyone was having. I tend towards these types of systems because I'm a dirty narritavist at heart.

On the other hand you can find massive simulationist games like GURPS or Dungeons and Dragons 3.5, where every single possible action has an associated skill check and roll to be made. The goal for these systems is to provide the players the tools they need to accurately simulate the characters that they want to play down to the finest facet of their skillset. Like many, DnD 3.5 was my first system, and I have to admit that it left a bad taste in my mouth for heavy crunch systems. I just don't enjoy maximizing builds and rolling high numbers all the time. If you do though, I won't look down on you much; Tabletop RPGs are great because there's one for everyone. Crunchy systems often demand a lot of die rolling and skills checks simply by virtue of the sheer volume of options available to players at any given moment. Having lots of skill gates (concentration rolls, to-hit attacks, active defenses, saving throws, etc) tends to make even simple interactions drag on, and force multi-participant combat into quagmires that rival the Lord of the Rings movies in length.

L5R manages to hit a really sweet spot when it comes to mechanics, letting you be more detailed, but also not get lost in rules. The core concept is a die pool system where you roll a number of die equal to your core stat plus your skill value in the activity, and then keep a number of die equal to your core stat. The resulting pool is summed and compared against a target number. There are further degrees of success based on how well you rolled, and your die do explode on 10s, where you can reroll and add the second result, allowing you to keep one die that has a total of 11 or more. In our game Jim had the rare treat of rolling one die and having it explode four times. Luckily for the players that was on a defensive check, so nobody got bopped. 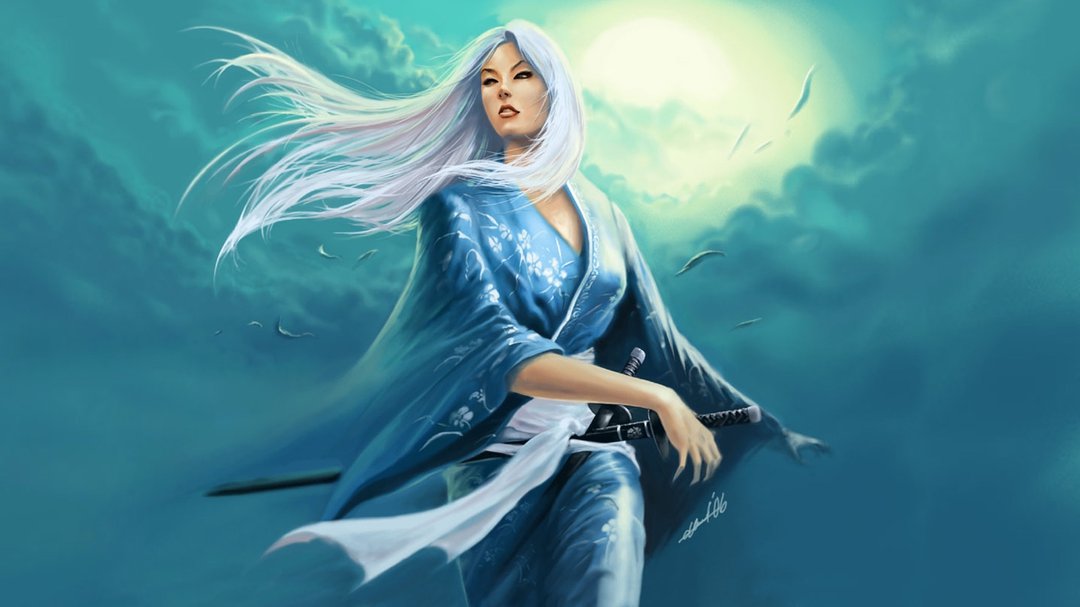 The system feels smooth, but with weight to it: it helps that you can make many different character types and campaigns in the system too.

One of the things that I noticed when I was playing was that each time I reached out for the dice to try something, I felt good about it. My character had a certain number of things that he was good at (mostly smashing things with a tetsubo, a departure from my normal playstyle) but I always felt like anything I tried had at least a chance of success. It was exciting instead of daunting to attempt tests outside of my wheelhouse, and I was looking for opportunities to exercise my die-rolling hand instead of finding the path of least resistance through a field of arbitrary skill checks. L5R is a system that doesn't punish failures and does reward successes, making them achievable but also scaling high rolls into more powerful successes in a way that is mathematically pleasing. At no point did I feel like rolling a die was going to negatively impact the narrative; it only added interesting twists as lines of inquiry didn't pan out.

Speaking of the narrative of L5R, holy shit: There's about as much plot in Rokugan, the Japanese-inspired land of samurai, magic, and kami as there is in the actual history of Japan. With a wealth of different Great Clans, lesser clans, and regions to play in it's safe to say that there's a campaign to suit all tastes. There can be games ranging from a no-swords-drawn conflict of ideals between courtiers, steel threats hidden beneath silken words, to a full-on mass scale battle between armies, or against the dark legions of the Shadowlands. Having a solid storyteller running the campaign (like Jim was) in this setting means that you can play many different styles of session, since there is such a great toolbox of material.

The game that my comrades and I played in was a low-combat whodunnit exploring the Palace of Crimson Shadows in the lands of the detestable Scorpion clan. Myself and my buddy Ian played Crab clan samurai, never known for their subtlety and tact on a good day, as we navigated the dangerous field of lies and trapped promises laid by the Scorpion Damiyo, and her minion who was played by my friend Kirsi. Having a paradoxically known and untrustworthy enemy in the party was a very interesting narrative experience for me. Keeping secrets without impeding the growth of the plot is a delicate balance to maintain, and it never feels good actively excluding another player. We managed to work around it and come together in the face of a common enemy, and Jim's plot was engaging and dramatic in all the right ways. 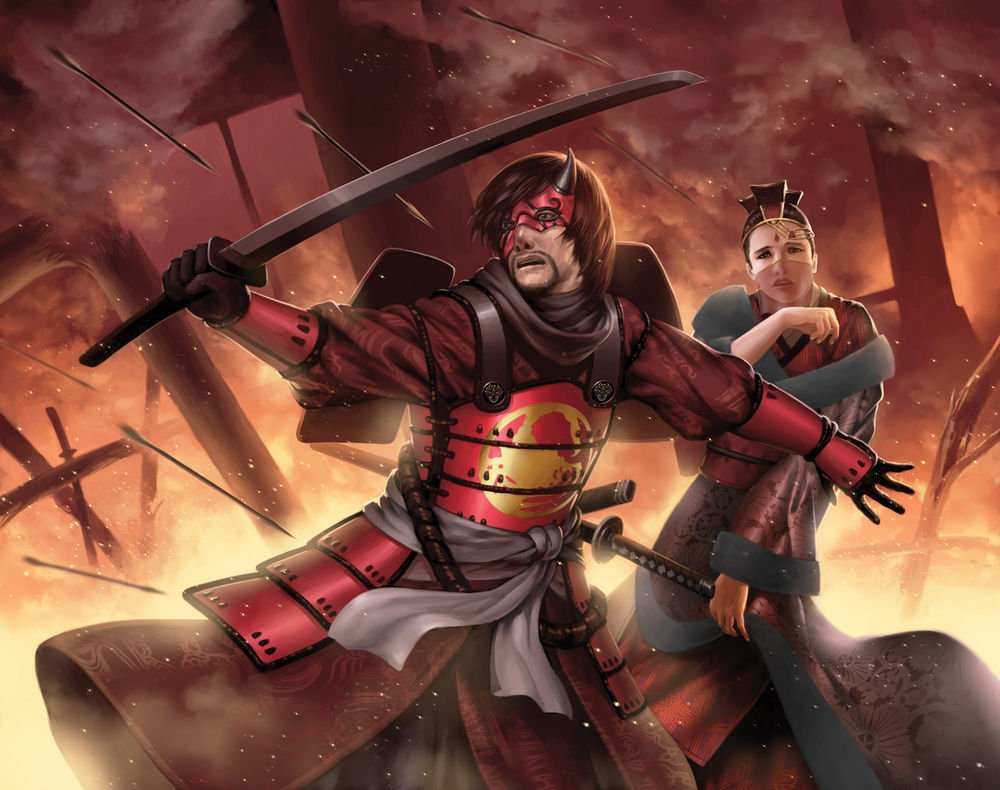 Even sneaky Scorpion Clan samurai can be honorable, don't be judging them!

While the Asian Fantasy setting wouldn't be my first choice for the majority of campaigns, it's a mechanical and narrative juggernaut. I'd recommend the system to any player to try at least once, because it's so surprisingly flexible one you get past the surface concepts of honorable samurai. I know that I'd be happy to return to Rokugan, even if I wouldn't want to live there.

If you have any questions about Legend of the Five Rings, hit me up @dkjolner or follow Jim McClure @gmjimmcclure! He's doing some great work with James D'amato and Kat Khul of the Oneshot Podcasting network with his Talking Tabletop series, and if you want to check out his stellar Legend of the Five Rings part 1 with Oneshot and the conclusion at The RPG Academy.