PAX East 2015:
Play 20XX, Because You Can Never Have Enough Mega Man 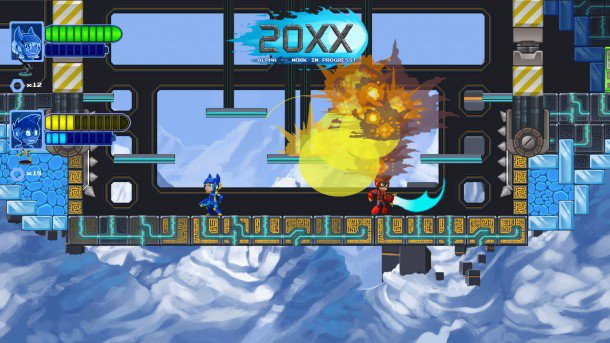 20XX by Batterystaple Games is… well, let me just repeat what I heard as I walked past their booth: “A Mega Man X co-op rogue-like .” Since I doubt that any sentence could be better designed to catch my attention, I immediately went over to check it out. The game is only in alpha, so it’s rough around the edges and changes on a weekly basis, but even so, I have to recommend it.

Let’s get this out of the way: yes, 20XX is a Mega Man X clone. It’s well aware that it’s a Mega Man X clone, and rather than trying to downplay the similarities, it embraces them. That much is obvious from the name alone, a direct reference to the fact that the Mega Man series takes place in “200X.” However, the differences are what make it shine.

20XX allows the player to take control of either Nina (totally not X) or Ace (definitely not Zero) and play through a series of randomly generated levels. The controls will feel great to anyone who enjoys Mega Man games, and they come complete with sub-weapons, sliding, and wall jumping. Even many of the hazards are the same: disappearing blocks, collapsing platforms, ice, spikes, and pits should look familiar to any Mega Man veteran. So why would I want to play 20XX instead of going back to beat Mega Man X4 for the umpteenth time? 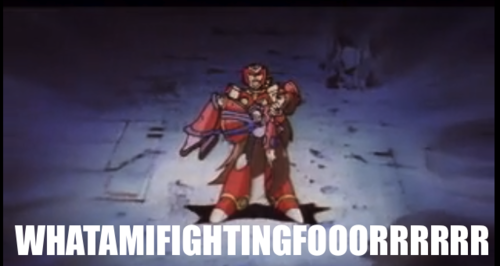 Well, let’s begin with "roguelike," which has certainly been a hot word in the indie scene ever since The Binding of Issac's success. First of all, it bears mentioning that although Batterystaple Games drew me in by saying that 20XX is a roguelike, it's actually much closer to a classic platformer with some roguelike elements: that's not a bad thing, by any stretch.

The randomly generated levels, plus randomized item drops and power-ups ensure that no two playthroughs will be the same. During play, you will be able to unlock new items and abilities for yourself, giving you a sense of progress as you fight through the endlessly looping levels.

Items that you find can boost your stats (health and attack damage are pretty self-explanatory, but giving out speed and jump boosts in a platformer makes for some fun times), give you new weapons, or various other effects. One of my favorites, Blood Magic, makes it so your sub-weapons occasionally leech health from the enemies they kill. 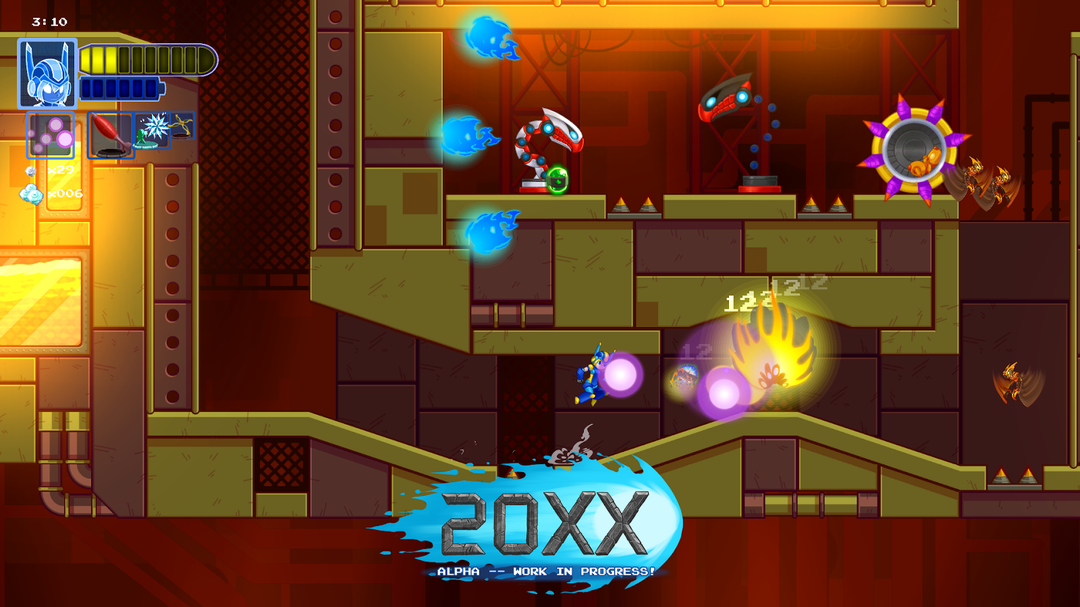 Finding a new primary weapon is one of the most awesome things you can do in 20XX . Playing as Ace, I have replaced his sword with a spear (no overhead arc to the swing, but higher damage and much longer range) and a wonderful, overpowered little weapon called the Plasma Blender, which makes each sword strike hit multiple times. As the game is still in alpha, it doesn't make sense to expand a whole lot on the items, since they are all subject to change. Suffice to say, the game already has a lot to offer.

The other thing that needs to be discussed is the co-op mode. Quite simply, it’s a brilliant addition to the game that's a lot of fun. However, playing cooperatively does mean splitting some resources, which can be pretty hit-or-miss. Sometimes I’ll find myself with more money and sub-weapons than I know what to do with, and I’m only too happy to let a friend have some. Other times, we have to stare at the one lone health drop and wonder who needs it more. However, the stat boost items affect both players, so there are no worries about one character leaving the other way behind.

Cooperative play also means that if one player is significantly better than the other at Mega Man and its notorious learning curve, that person might find themselves being frustratingly slowed down. 20XX uses the Castlevania: Harmony of Despair approach to multiplayer – a single screen that zooms out more and more the farther apart the two players get. Players can strike out on their own to some extent, but if they go too far, they might find that everything’s become unplayably small.

The co-op mode also means that you've got someone to watch your back, which comes in handy against the sometimes overwhelming swarms of enemies. Even more helpful are the respawn stations which allow a surviving character to split his health with his dead ally. Speaking as someone who’s beaten the original Mega Man , believe me when I say that you’ll be glad for the backup.

On the other hand, if you’re just that good , they've got something for you, too. 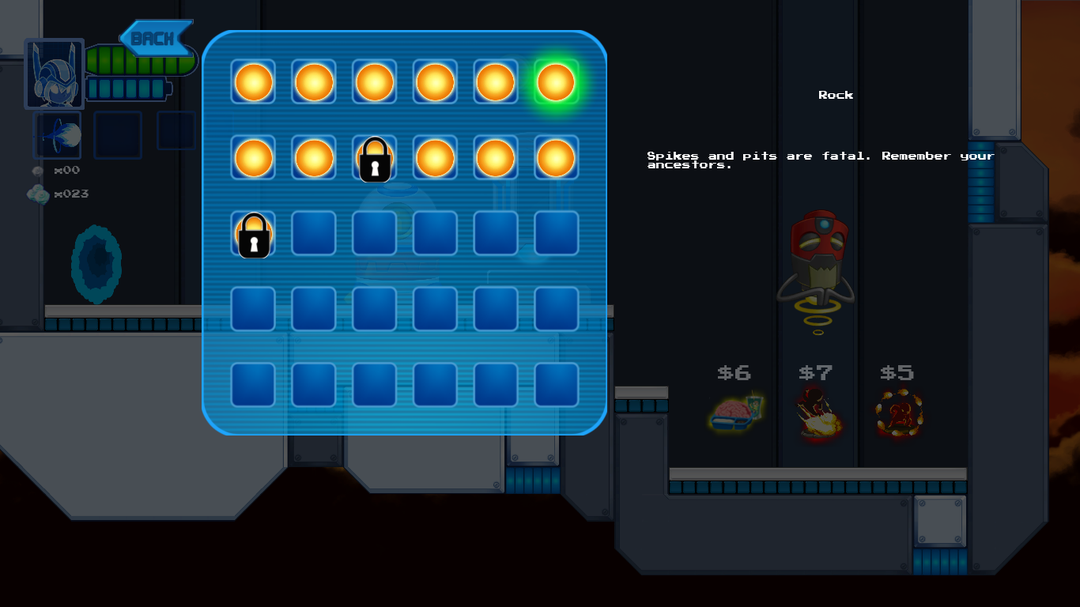 At this point in the alpha, the only co-op mode available is the single-screen play that I discussed earlier. There aren't any options for online play or even LAN, but we will have to see what the future holds. On the other hand, the co-op mode as it is now takes one back to the days of friends huddled around the SNES, with the Doritos and Mountain Dew flowing. It's a great nostalgia trip.

Aside from the current lack of online play, my only real gripe with the game right now is its highly forgettable bosses. The current bosses are nothing but larger, tougher versions of basic enemies. Still, the game is only in alpha, and I hope that we’ll soon see these replaced with something more fitting for a Mega Man X tribute.

In my articles about Shovel Knight and its expansion , I discussed how that game thrives on making the old feel new again. That is exactly what 20XX is striving to do, and so far, it’s doing it well. The game-play feels a lot like the old Mega Man X games, and there’s a definite nostalgia factor present in the level and character design, but 20XX also brings something new to the table with its randomized levels and co-op mode. I highly recommend it to any fan of Mega Man , or old platforming games in general.

So go make a friend, choose your weapon, and get ready to - 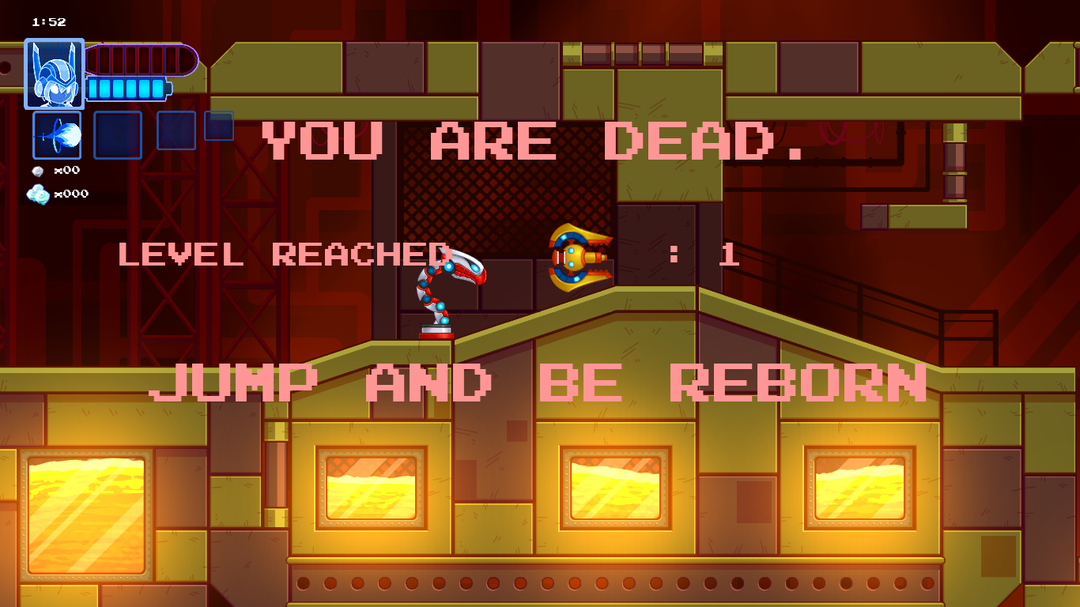