My Positive Thoughts on Destiny

Shooting For The Stars 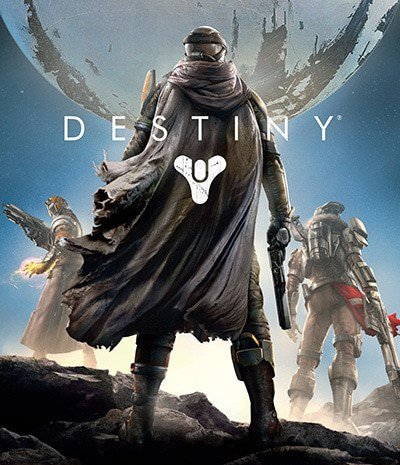 I didn’t pay much attention to Destiny at first. I heard the hype about it and somehow, I got it into my head that it was just the newest Call of Battlefield: HaloStrike style multiplayer FPS game. Since competitive shooters aren’t my cup of tea, I pretty much ignored it.

I finally got into the game with The Taken King expansion in December. By this point, several of my friends had recommended it to me and, when I learned that the main focus was the campaign—not PvP like I had thought—I downloaded the Legendary Edition and gave it a try. I didn’t know a whole lot about it going in, but I did know that reviews and reactions to the game were... mixed to say the least. I wasn’t quite sure what to expect.

To make a long story short I now have two max-level characters and I’m afraid to check how many hours of play I’ve logged.

"Wait, was I supposed to go to work today?"

I think the fact that I had no preconceived ideas going in has helped me to enjoy Destiny as much as I have. In the time leading up to its release, Destiny was being touted as the beautiful, perfect lovechild of Halo and World of Warcraft. It was going to be an amazing, immersive MMORPG in the style of a first-person shooter. Most of the complaints seem to stem from the fact that it didn’t live up to that hype, rather than because it is itself a bad game. What Destiny strikes me as is an excellent FPS set in the framework of a casual MMO.

Since I know some people might take that the wrong way, let me be clear: I don’t mean “casual” as an insult. What I mean is that Destiny gives players a bit of wiggle room. It’s a lot more forgiving than the more “hardcore” MMOs like World of Warcraft, or even Diablo II. You aren’t locked into your character build, you don’t need to find the perfect gear, and there’s very little grinding involved in leveling up and getting through the story itself. Only at the end game, where people have hit maximum level, are there barriers to get through the big raids. 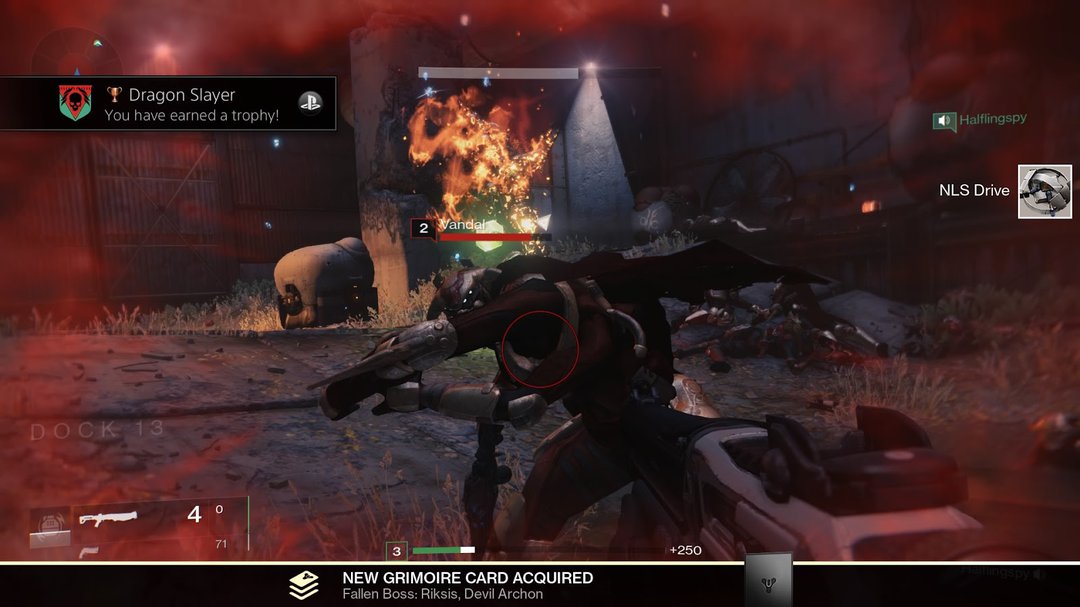 There are three character classes, each of which has two (later three) sub-classes, but they’re more like specializations than specific roles. A Titan is pretty tanky, a Hunter will usually have high DPS, a Warlock can do pretty good crowd control, but a successful fireteam doesn’t need to be one Titan, one Hunter, and one Warlock. Any class can more or less fill any role, and the fact that you can switch around your stats, skills, and even sub-classes at will —another hallmark of the casual RPG—makes team building even more flexible.

Similarly, finding the perfect equipment isn’t such a huge deal unless you are going to try and speed run heroic mode strikes, or try and be the #1 PvP star in the rankings. Obviously, some pieces of gear are better than others, and once you hit max level, you might find yourself doing a bit of grinding to find what you need to do the harder missions, but it’s not like there’s that one specific thing you have to find to make your character work. I personally find that the infuse mechanic is a very nice touch here: Legendary gear has an ability where it can absorb other gear of the same type to boost its stats. For example, if I have a legendary gun with great effects, but later find something with higher attack power, I can just infuse the legendary weapon with the new one and get the best of both worlds. That one little addition saved me a whole lot of frustration and item farming. It's not a perfect system, but it worked for me. 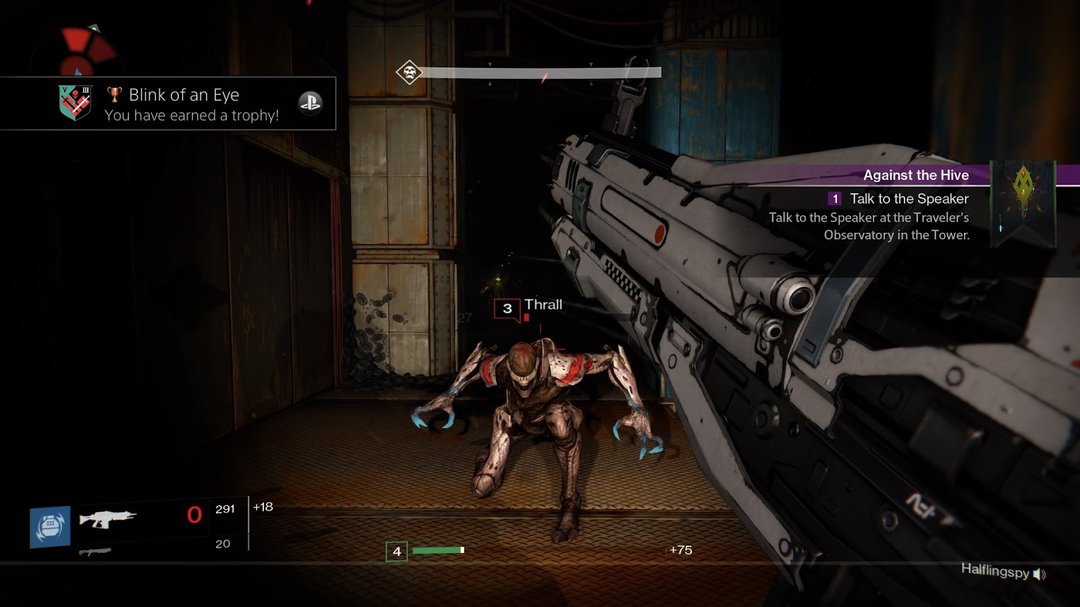 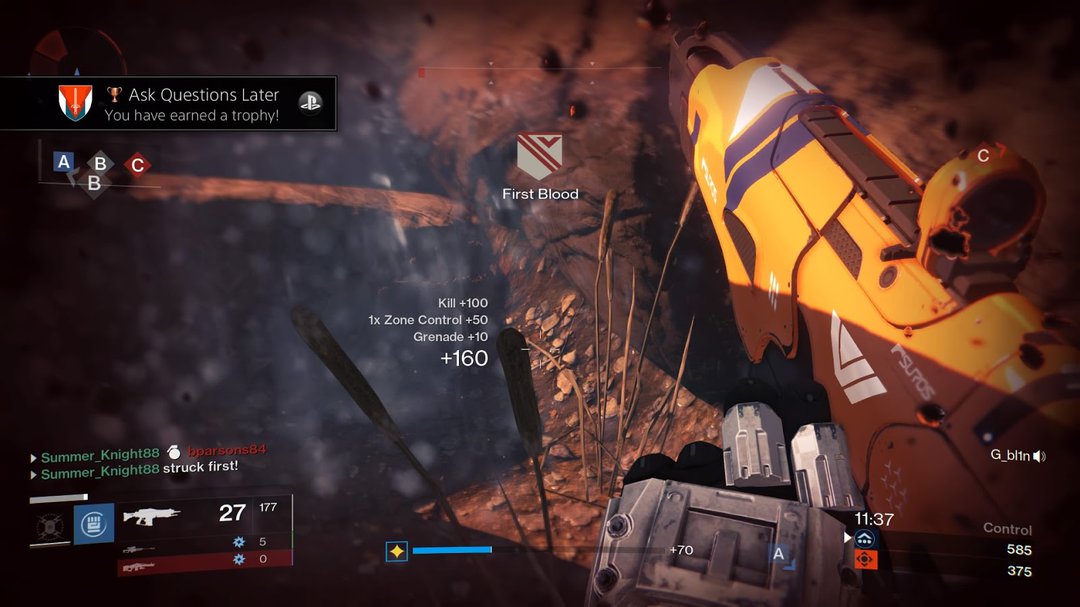 The Crucible is the dedicated PvP arena, but even there, you can choose who to talk to. For me, that made a huge difference.

Finally, there’s the fact that Destiny doesn’t take itself super-seriously. It’s a pretty bleak setting for sure, and the plot starts to border on grimdark territory, but the game isn’t afraid to have fun. Your Ghost (a sentient fragment of an alien superstructure called The Traveler) is a snarky little thing, which frequently questions what’s going on and points out inconsistencies with both your superiors and your enemies. Cayde-6, the leader of the Hunters, is voiced by Nathan Fillion and is essentially Firefly’s Malcolm Reynolds without the dark edge. There’s also the fact that each Guardian has a few emotes that they can use, thereby making dancing the primary mode of communication.

Also, every now and then you just take a step back and realize what’s going on: You’re one of maybe a few thousand Guardians who is up against endless legions of scavengers, evil aliens, and an army of nine foot tall monsters with shields. Then later you start running into the Taken, who are any of the previously mentioned forces except that they’ve been captured and transformed into living weaponized energy. Oh, and let’s not forget the Vex, the evil time-traveling robots. Destiny is—and I say this lovingly—pulp sci-fi on the level of Warhammer 40k. 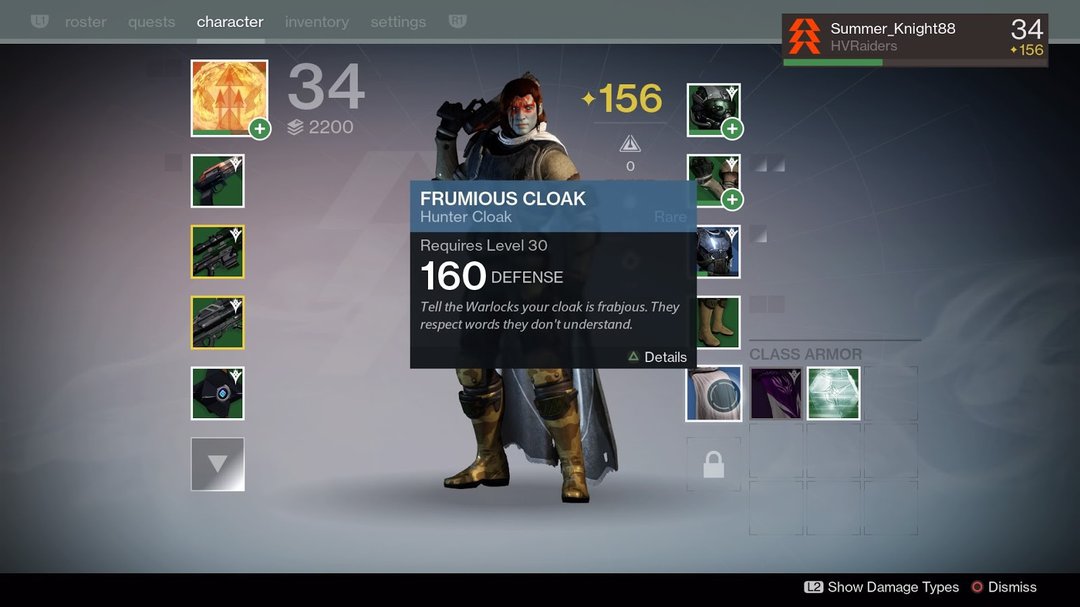 Of course, no game is perfect, and Destiny is not without its issues. As much as I enjoy the casual MMORPG feel, if anything it’s a bit too light on the RPG elements. The Infuse mechanic might help keep your gear up to par, but the fact that there’s no trade function is worth a raised eyebrow. There's no real match-making for the end-game raids, making it hard to run unless you have a group of friends, or go outside the game itself to websites made to help create raiding parties.

The storytelling is a bit lacking as well. The NPCs will tend to tell you the bare minimum you need to know for your next mission and leave it at that. There’s plenty of lore to be found, but you really have to go digging for it—and I don’t just mean in-game. Most of the information about enemies, locations, and events can be found on Bungie’s website, but nowhere in the game itself.

One relatively minor thing that really stood out for me was the fact that no one in this galaxy seems to have heard of the concept of “the enemy of my enemy.” You’ll frequently be on a mission and run into two alien forces groups battling each other for control of an area. Rather than letting them fight and mopping up whatever survivors are left, you’ll immediately be ordered to attack and wipe out both forces. This goes along with the general lack of communication; if there’s an in-game reason for those orders, nobody sees fit to let you know. 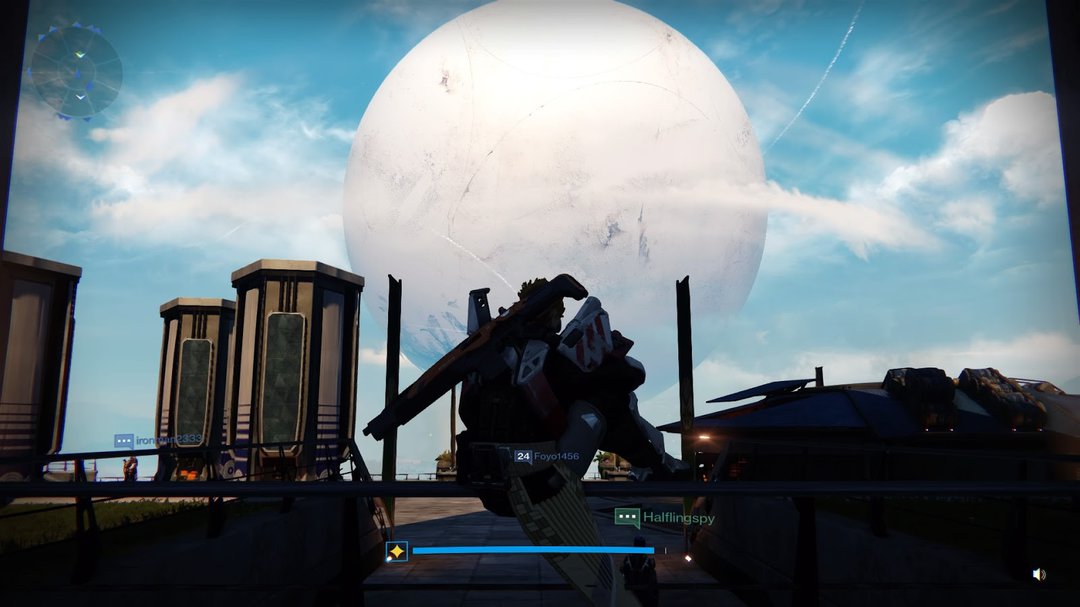 "But what does it all mean? And why do I keep staring wistfully into the distance?"

Finally, when you get to the endgame, things start getting a bit repetitive. Once you complete all the story missions and had a chance to try out the raids, there’s nothing left to do but Vanguard Strikes, which are just the same missions selected at random. You can go on harder versions called Heroic Strikes in order to keep things challenging, but again, there’s no new content to be found there. Perhaps it’s just the nature of the MMORPG beast, but there’s no sense of conclusion. The game just keeps stretching out until you get tired of it, or new content is added.

Overall, though, I’ve had a fantastic time with Destiny. It’s fun to play solo, and a lot more fun to play with friends. The issues I have with the game are pretty minor overall, while the great FPS action and variety of character classes have gotten me much more than my money’s worth. In the end, I can complain about how the content of the game has run dry, but after I've sunk more than a hundred hours into the game, should I? 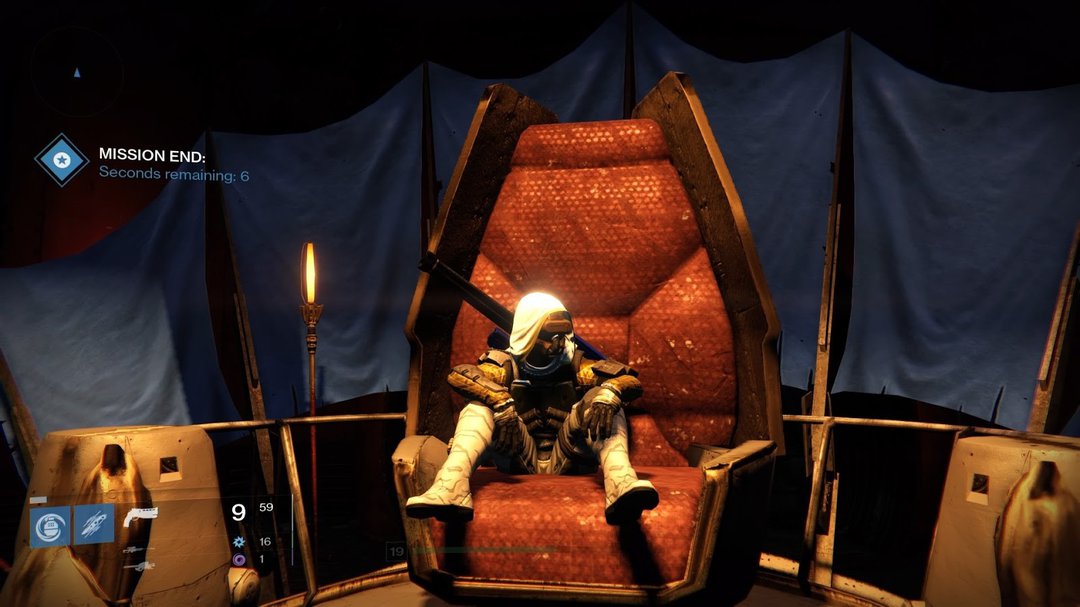 Hail to the king, baby.

I’ll leave you with my favorite Destiny story. I was playing with Wyatt and Reid, both other writers here on the site. We had been having lots of fun working through the game, doing quests and strikes in sometimes...unorthodox ways. This time, we were up against an enemy tank. Wyatt went to distract, I found a great sniping position up on a hill and started lining up a shot.

Reid stepped in front of my scope so that all I could see was his big goat-skull helmet, and proceeded to use the jazz hands emote while shouting "jazz-hands!" through the mic, like he had so many times before. Then the tank shot him and we both died. As Wyatt yelled at us, all three of us were on the checkpoint restart a few moments later, but we were too busy laughing to care.

Has Destiny left you with great moments like this, or did it leave you cold and angry, like internet comments do? Let us know in our comments section! If you like what you’ve read and want to keep up on all of our gaming news and discussion, please give us a like on Facebook. PAX East is less than a month away, and we’re going to have a lot of coverage that you won’t want to miss out on!