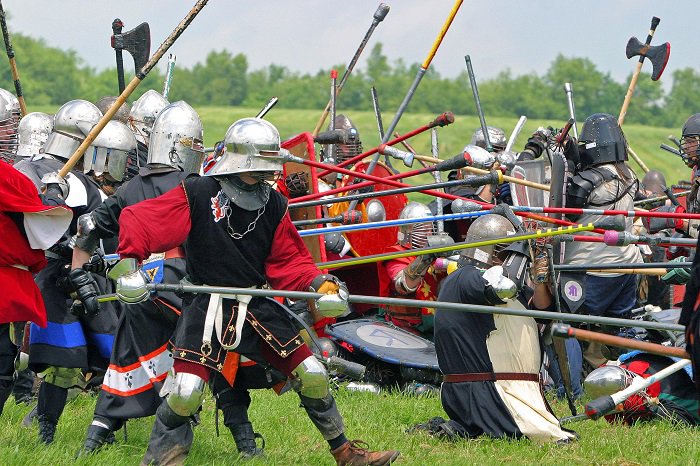 This article is about both video games, and actually hitting each other with blunt objects. So, before we get started...

MOBA: Multiplayer Online Battle Arena. A type of game wherein a player controls one character on a larger team and tries to destroy an enemy base (e.g. League of Legends or Heroes of the Storm). K/D Ratio: Kill/Death Ratio. How many enemy players you killed vs. how many times you were killed yourself. SCA: Society for Creative Anachronism. An association for medieval enthusiasts and reenactors. Heavy list: A combat style within the SCA featuring armored combatants with wooden weapons. Marshal: An SCA member who is certified to train others in a certain type or types of combat. May also oversee combat events.

A New Fencer Has Entered The Rift

You may remember the article I wrote some time ago about my first experience at an SCA event. I recently attended another: the Hundred Minutes War. As you might expect, this one had a particular focus on combat. There were one-on-one tournaments for both heavy list (armored combat) and fencing, but the main event was a large team battle lasting one hundred minutes - hence the name.

I was not expecting to participate in the combat. You have to be certified in a particular type of combat before you’ll be allowed to fight at events, and when I arrived to Hundred Minutes I was not certified in anything. However, once I met up with my local fencing marshal, she threw me to a couple of others and asked them to test me. They did, and I passed. I was now certified and able to fight.

This was, oh, maybe ten minutes before the main fencing event began. 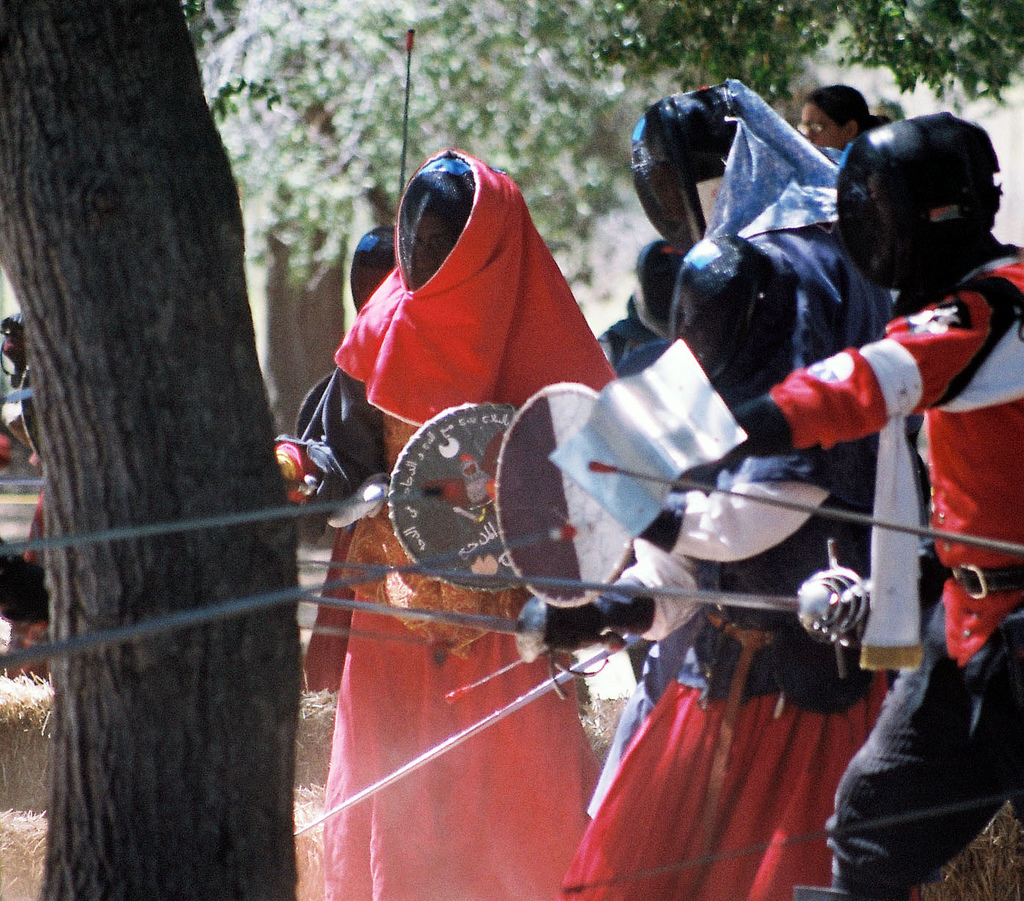 A line of fencers in combat. Photo from http://welcome.sca.org

So, to make a long story short, I was thrown into a team-vs-team fencing melee unexpectedly and with little chance to prepare for it. The whole experience was quite a bit like playing League of Legends when you’re not very good at it - something else that I’m pretty familiar with. However, I don’t just mean that it was like League of Legends in that it I spent the game having my team tell me what to do, understanding about half of it, and hoping that I was doing the right thing; the scenario itself was very much like a MOBA.

While the heavy list combat took place in an open field, the fencing melee was held in what they referred to as “The Maze.” The Maze turned out to be a wooded area with two large paths through it, as well as numerous smaller trails. The main paths were wide enough for five or six people to stand side by side, while the trails fit one or perhaps two. To help you picture all this I’ve drawn a detailed map of the battlefield, which can be found below. 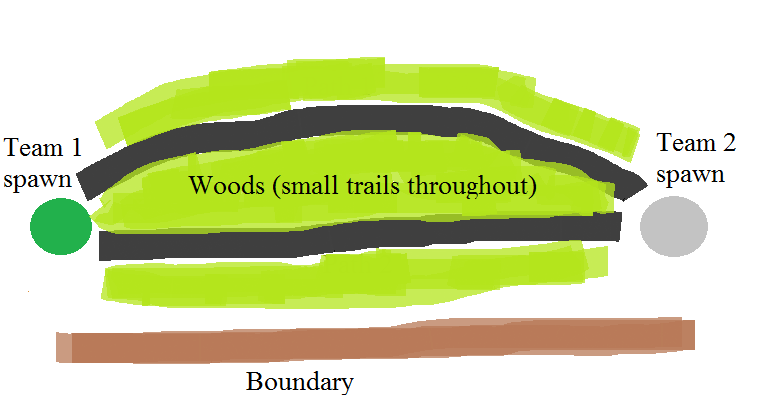 Two teams, two bases, paths leading from one to the other, and even some smaller offshoots to allow for jungling. It didn’t hit me until we were actually into the fighting, but we were playing a real-life MOBA. Luckily for me, a lot of the same strategies applied, too.

Now, first of all, the biggest part of the strategy was just to listen to the guy in charge of the team and do what he says. There was less individual agency than in an online MOBA, because there were more people to keep track of and anyone who went to fight on his own was doomed. Most commonly we’d fight in lines of four or five people, as many as would fit next to each other on the roads. However, just replace the heroes in a MOBA with lines of fencers, and it played out in much the same way. 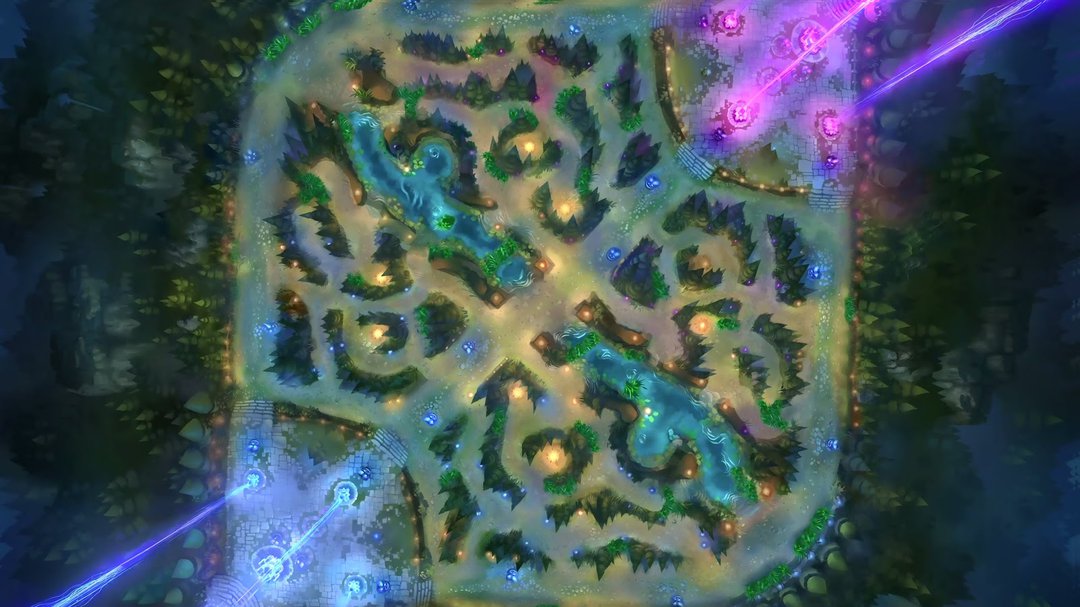 An actual high quality rendering, of League of Legends' arena, for comparison

Losing members of the line was much like a hero losing HP, leaving the rest of the line more vulnerable. Lose too many members and the line would collapse completely. Then there would be a delay as the “killed” fencers ran back to their respawn point. There was no means of long-range harassing (other than vocally) but there was still the same sense of tension and characters dancing around each other that MOBA players know so well. An overextended enemy line could be killed, but a reckless pursuit could run your line straight into an ambush. The same instincts that warn seasoned gamers when someone is about to launch a surprise attack from the jungle served to warn us when someone might be sneaking around our lines. Most of all, you have to keep an eye on the prize. Killing enemy combatants was helpful, but that was usually not the goal. For example, in this melee, only one out of the three scenarios could be won by wiping out the enemy team. The other two scenarios were Capture the Flag, and an escort mission. Much like killing enemy champions in League of Legends is helpful, since it gives you more power and money, but is not enough by itself to win the game.

I don’t mean to make it sound like I was some sort of prodigy in my first melee - far from it - but my gaming experience gave me an undeniable leg up once I realized just what kind of game it was. My K/D ratio wasn't very good, but being a good strategist helped. 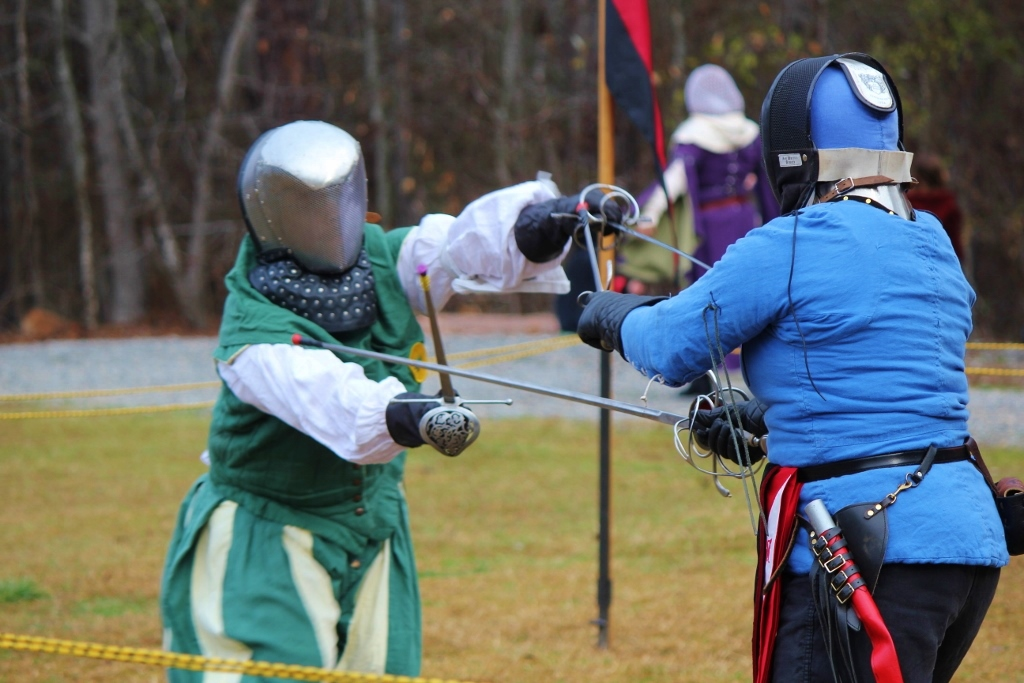 Two fencers duelling. Picture from http://welcome.sca.org...Look, it's really hard to get pictures of an event that you're fighting in while in the middle of the woods, okay?

I don’t think the intention here was to create a real-life MOBA; I very much doubt that the melee was designed with that in mind. Rather, strategies are strategies and experience is experience. We had an area to defend with a couple of major roads leading in, and we were against an enemy team with the same setup. Whether it’s a video game with player-controlled heroes or a real-life engagement with groups of fencers, many of the same techniques apply. You have to know when to push, when to fall back, when to go for the kill and when to let the stragglers get away.

So the next time someone tries to tell you that you’re wasting your time playing video games, let them know that you’re training to win a round of Capture the Flag against a team of twenty fencers.