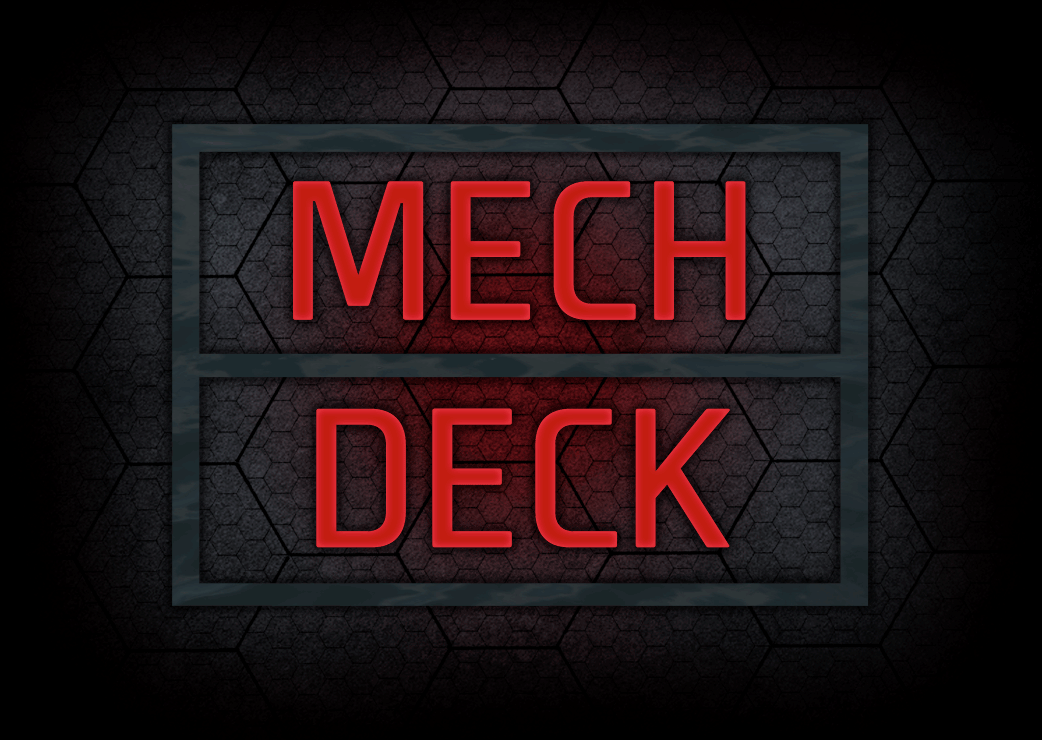 I'm a sucker for giant robots, no matter how big they are. Mech Deck has the biggest tiny robots in the business. Or the tiniest big ones, I'm not sure. Either way, Mech Deck is a promising game and I'm very excited to see where Lead Designer and weekend mecha-pilot Patrick Fahy takes it.

There's a blend of parts-drafting, tactical play, and silly blind luck that creates an addictive play experience. The core concept is that players get to create mechs from disparate parts in order to blast the shit out of each other in a deathmatch. 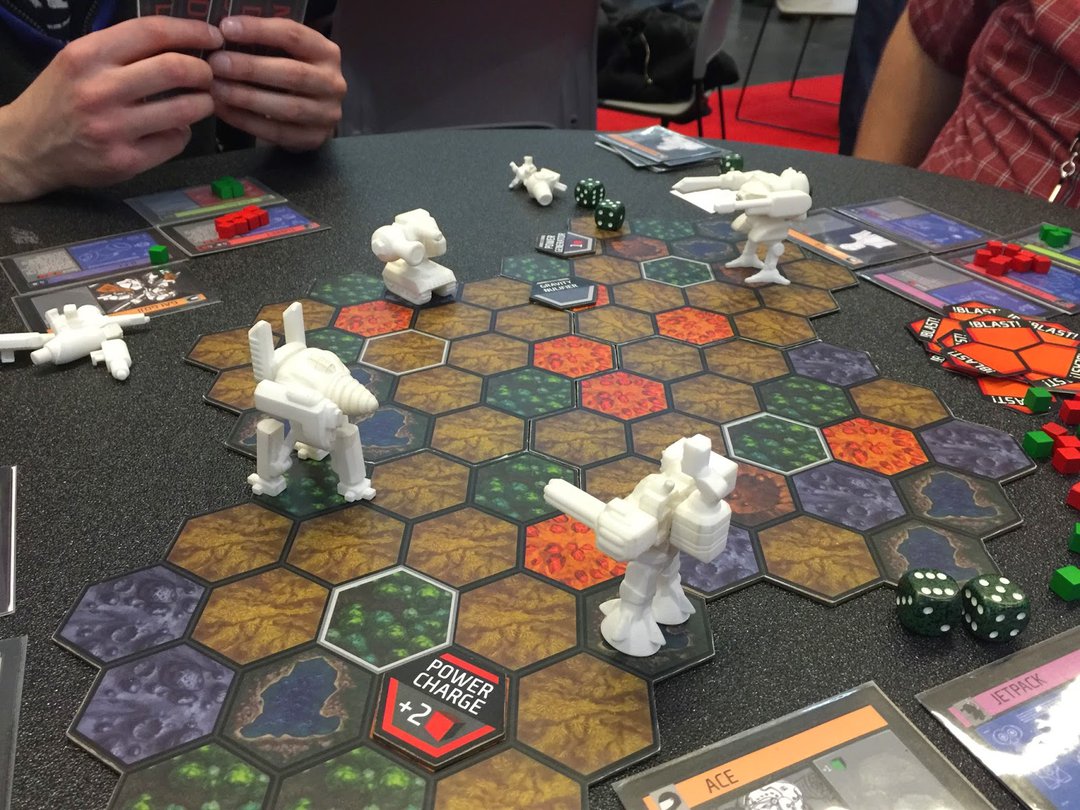 All the models are 3D printed because we live in THE FUTURE.

It's pretty visceral when you get to blow bits off your opponent's robot. Bonus points if you yell out the names of your attacks like a giant anime nerd.

I yell out my attacks when I play this. I'm a giant anime nerd. Sorry.

There's a deep pool of parts to choose from with two slots for arms, a chassis, back unit, and legs. Each part adds different attacks to your mech. There was a chain gun, a sword, and (my favorite) the mortar launcher! Furthermore, you can choose pilots that have different abilities to suit your preferred style of gameplay. When I got to play Mech Deck at PAX East 2015 it was a little rough around the edges, but the core rules seemed solid. It felt like it was in a fluid development phase, but that didn't detract from the central points of the game.

Each fabricated mech played differently, using its various parts to promote short-, mid-, or long-range strategies with varying levels of defensive capabilities. The rules were simple and the terrain was easy to see. It felt like Warmachine boiled down into a handful of units.

One of the really neat things, which kept the game from just being a total dicefest, was the addition of the titular Mech Deck, a pile of cards that have combat abilities that you can play. There were attack deflections, sentry turret spawns, bonus energy or movement, and a lot of other effects to turn the combat on its head. I had a lot of fun bouncing a laser off a reflective shield straight back at the guy who tried to shoot me, because who doesn't like seeing someone get hoisted upon their own ionic petard? 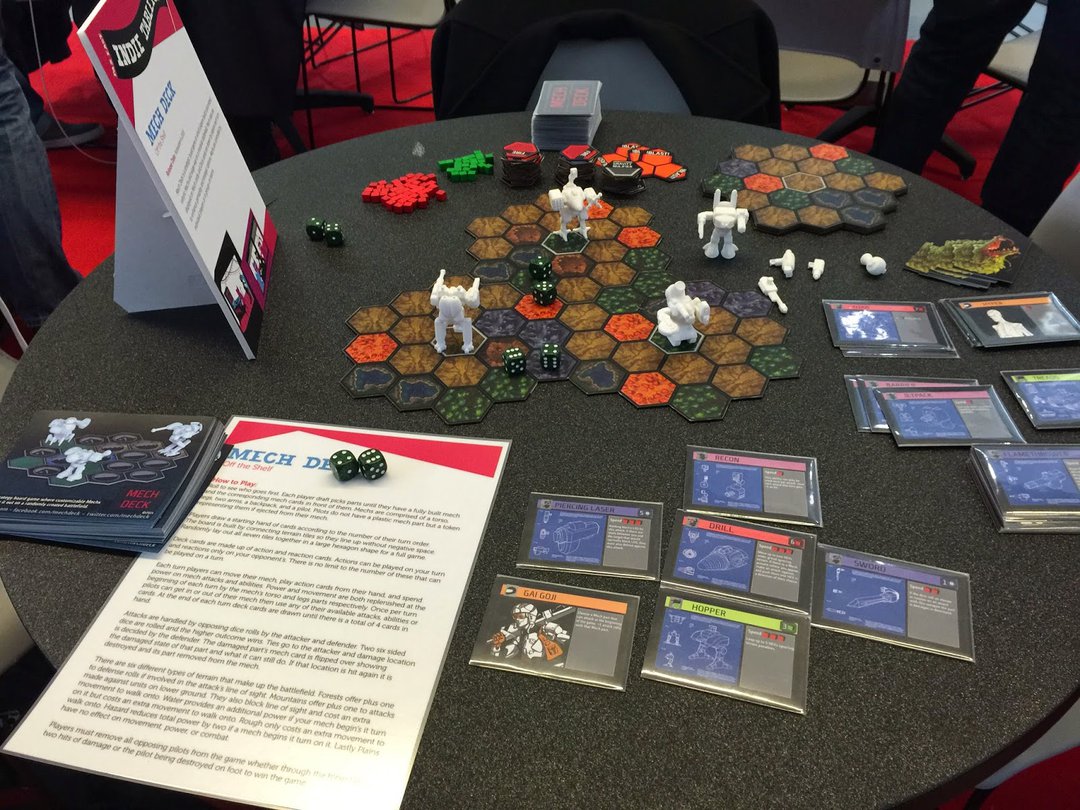 Victory is achieved by being the last man standing, and that can leave players who get knocked out early sitting on the sidelines as the match plays out. In the interest of more continuous player involvement I suggested adapting to a victory point system where you get points by damaging systems. One thing that Fahy mentioned was a lot of players asking for a suicide ram move if their mechs were crippled, but from a player fun perspective that seems like a good way to just say "fuck you" to the dude in lead, taking him down with you. That's gonna hurt some feelings. So, the rough edges were pretty significant, but Fahy seemed to have a good grasp on ways to change the game and he didn't shy away from criticism. 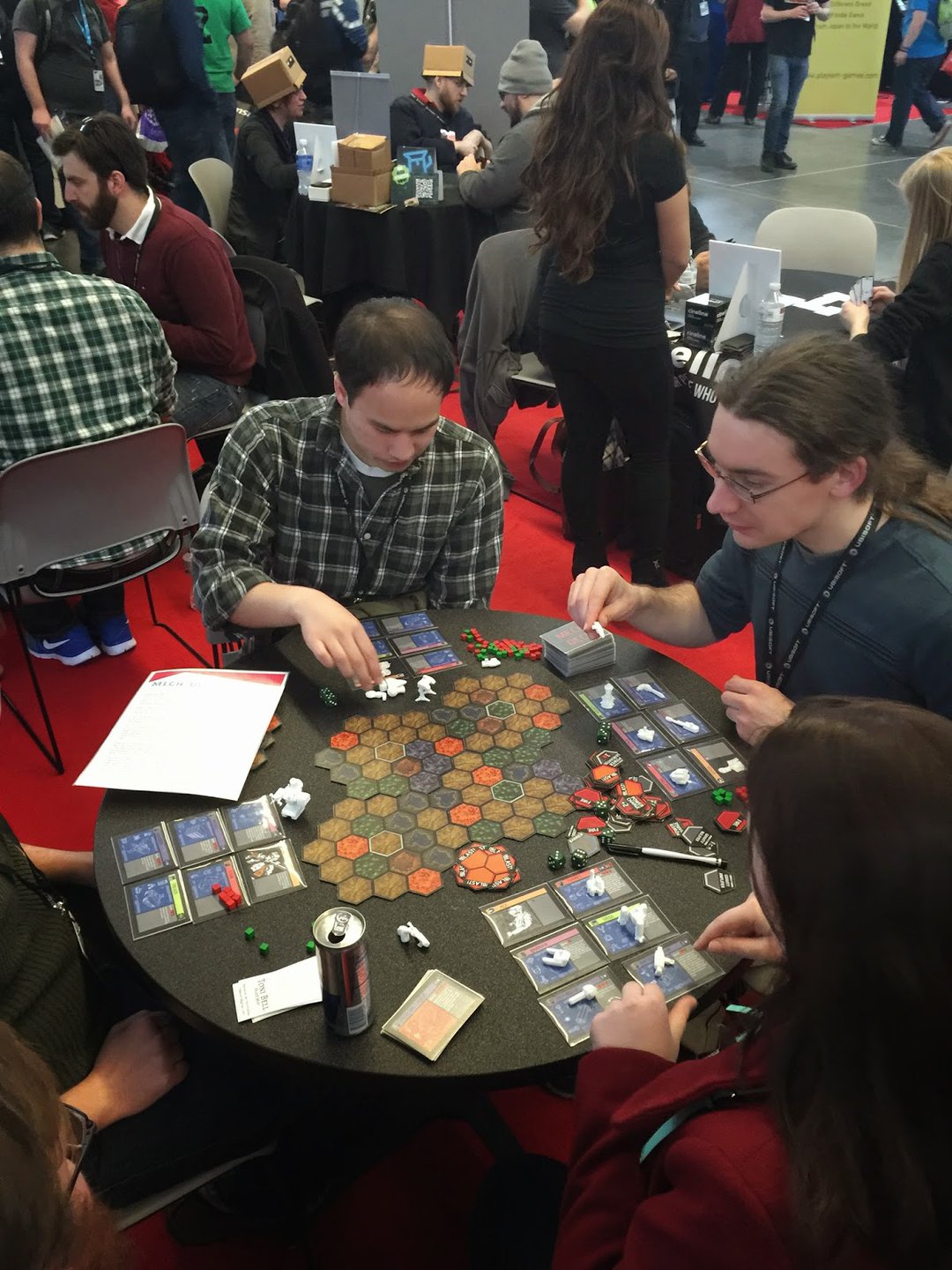 Not shown: the technicolor transformation sequences.

Fahy said that he wanted to make a game that took all the crazy chaotic fun of WizWar and combine it with the depth of Xia. Player skill determines a lot in the game but you can still get blown out by a few lucky rolls. Tactics and placement matters but you're still beholden to the dice gods. It feels like a hearty beer-and pretzels-game that will be a great gateway drug into deeper tactical miniatures games. If you have younger cousins or significant others that are weirded out by your obsession with tiny plastic robots (I'm talking to YOU Sarah) then this might be a good starting point.

Keep up to date with Fahy at mechdeck.com. If you like my dumb words then follow me @dkjolner. If you want to make sure our server can kick its heroin habit consider helping out our Patreon. Digital methadone is really expensive, you guys.