A Last Chance Pick From PlayNYC 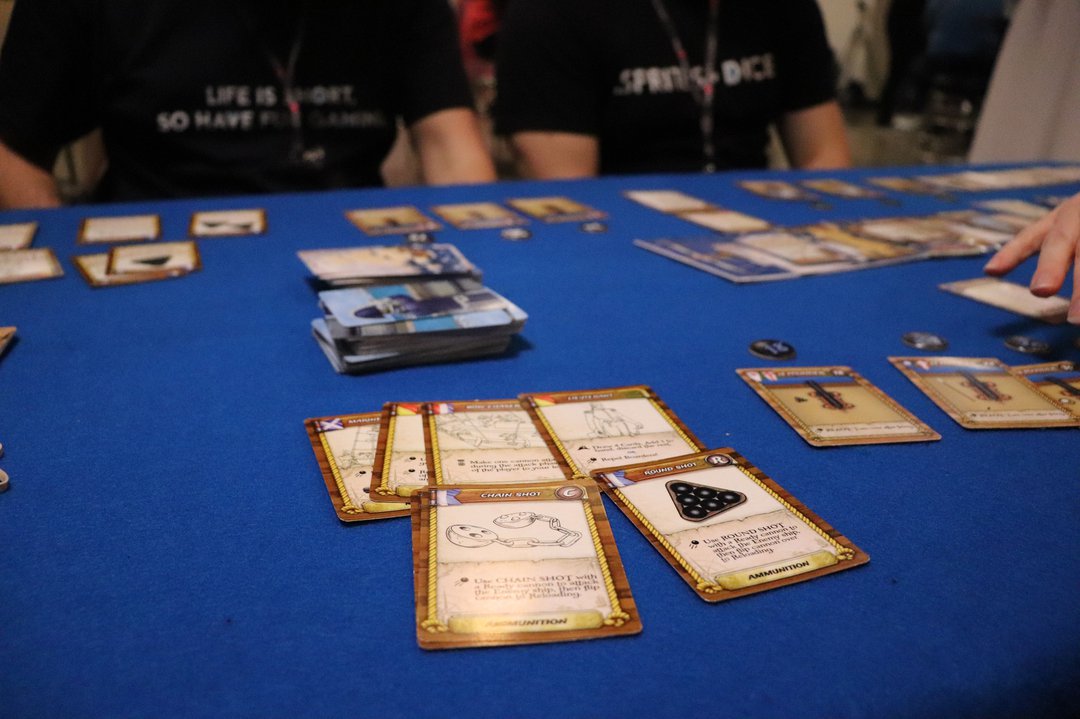 The smoke has barely thinned as you roll your reloaded cannon back up to firing position, the enemy ship in full view off your port. You light the fuse and turn your head away: it’s Clear the Decks! by Chris Pinyan, and it’s got less than 60 hours left until its own fuse is gone!

Clear the Decks! is a cooperative card game set in the age of sail. In this game, a team of one to four players (yes, there’s a solo mode) prepares their artillery and directs their crew as they engage in a deadly duel of cacophonous cannons. Each turn players will do their best to mitigate enemy cannon fire, boarding parties, and damage to their own guns. The last ship still sailing is the victor. Will it be yours?

Editor’s Note: this spotlight is not a paid promotion, nor were we given a review copy. As part of our motto to have fun gaming, we at Sprite and Dice feel strongly that this game is really worth your time and attention, and we simply want to spread the word about the wonderful work that’s gone into it. 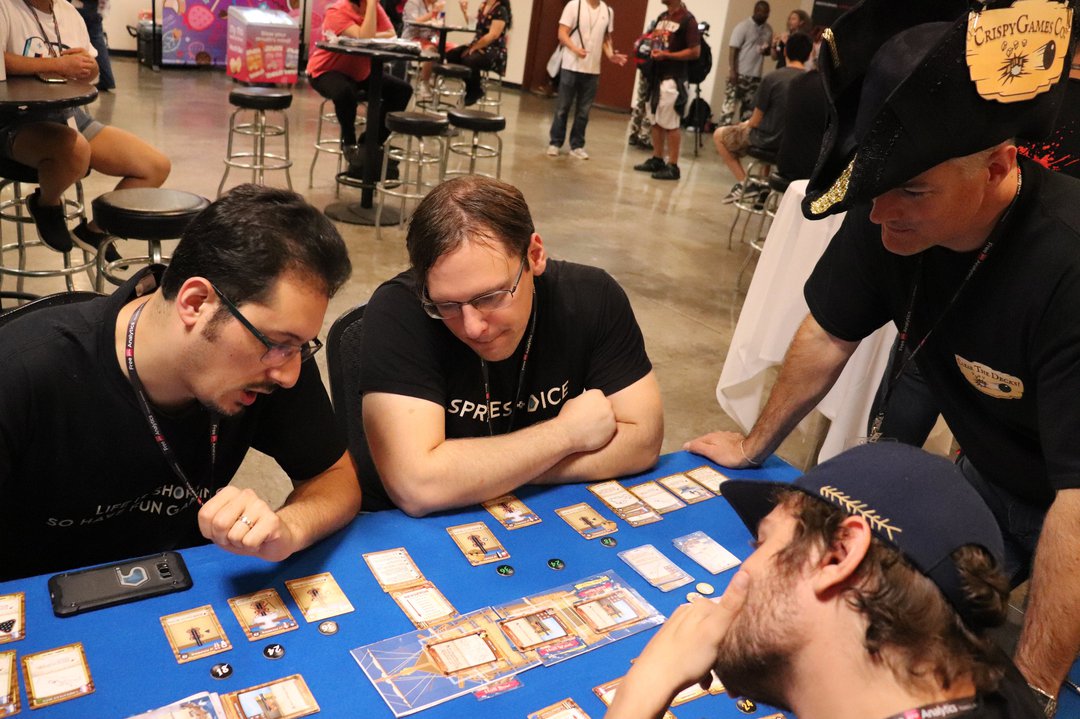 Please excuse my mouth hanging open in this shot. I'm simply in awe of how much game is packed into this tiny cannon of a title.

Your big guns are reloading as the enemy pulls alongside you, no doubt intending to rake your ship. But you’ve been waiting for just this moment. Loaded into your meager 18-pounder is a chain shot with the enemy’s mast now in perfect view. You fire first, and down it comes, taking the sails of the next mast down with it. There’s a cheer from your crew, cut short by a chilling sound. As the enemy closes further, there are shouts of others working their way onto your decks. You yell for your crew to prepare for boarders.

Only One Crew Can Stay Afloat

One of our favorite takeaways from PlayNYC last weekend was our time spent trying this small but very solid co-op card game buried in the basement of the Manhattan Center. Each player has their own set of three cannons, but players have to work together drawing cards, passing them to their allies, and managing their firing/reloading to cause the most damage possible. The enemy ship has several decks of cards to represent their hulls, and each deck has it's own stack of challenges you have to reveal. The object of the game is to clear those decks of cards, exposing hull cards and eventually the “leaky hulls” beneath them. Punch a hole in all the ship locations before your team succumbs to cannon fire and boarders and you win! Don't worry, there are always more targets: How big a ship is and how many cards go into each pile are completely up to your fortitude and how difficult you like your deadly naval combat. Clear The Decks! was made for replayablity and letting you scale the challenge to your team. 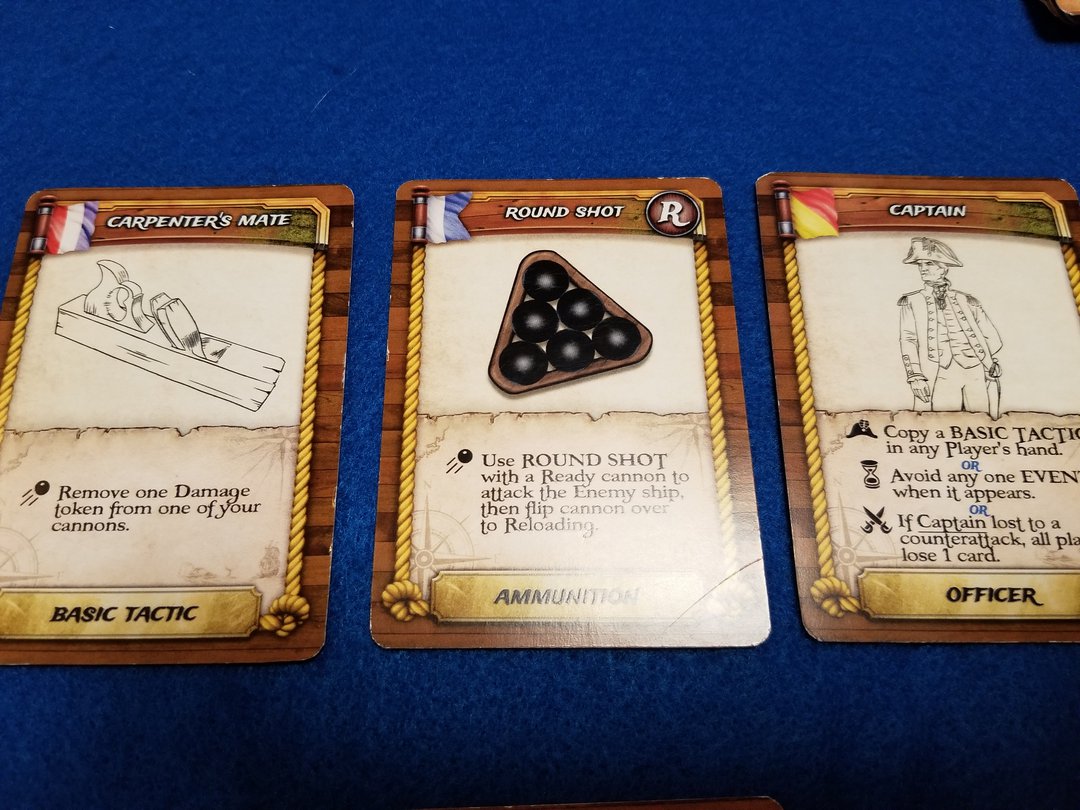 The cards have a very historical feel to their artwork that compliments the theme and tone of the game.

We loved this game for a lot of reasons. First off, from the boardgamer in me the card design is done very well; all the different decks of cards have a colored rope border for easy sorting, and the graphic design balances some nice artwork with easy-to-read layouts and clearly worded abilities. We had absolutely no questions about the rules after our brief tutorial! The game is snappy and tense as any good cooperative should be, and downtime was minimal. With the ability to pass other players your cards at the start of their turn, we were always engaged even while waiting for our own turns to come back around. There are all kinds of ways to play as well, from the special abilities granted to you by officer cards, to coordinating special ammo between your team’s available guns, to dramatic cards like launching a fire ship...which Wyatt used (blowing up the rest of his entire hand of cards) to destroy one card from every deck on the enemy ship (and saving us from two boarding parties).

The game is quite educational from a historical perspective, as well. Chris explained how the flags on the cards are used in real life, corresponding to letters of the alphabet (and specifically match the first letter of the names on the cards themselves). All the terminology is accurate to the time period. The cannons range in weight from 18 to 36-pounders, and some of these are specifically needed to attack certain enemy ship bits. Even the way you flip your cannons backwards lengthwise to their reload side after firing is thematically charming. The game itself has a mechanism at the end where the objective cards (the hull and leaky hull) are flipped to reveal added abilities. This prevents, as the designer says, a snowball victory and keeps the game tense. If you run out of momentum in clearing up to that point, it’s entirely possible that new cards will come off the draw pile to cover up your objective as the enemy rallies back, leaving you with new crew, cannons, and other challenges to deal with before you get another shot at your their hull. 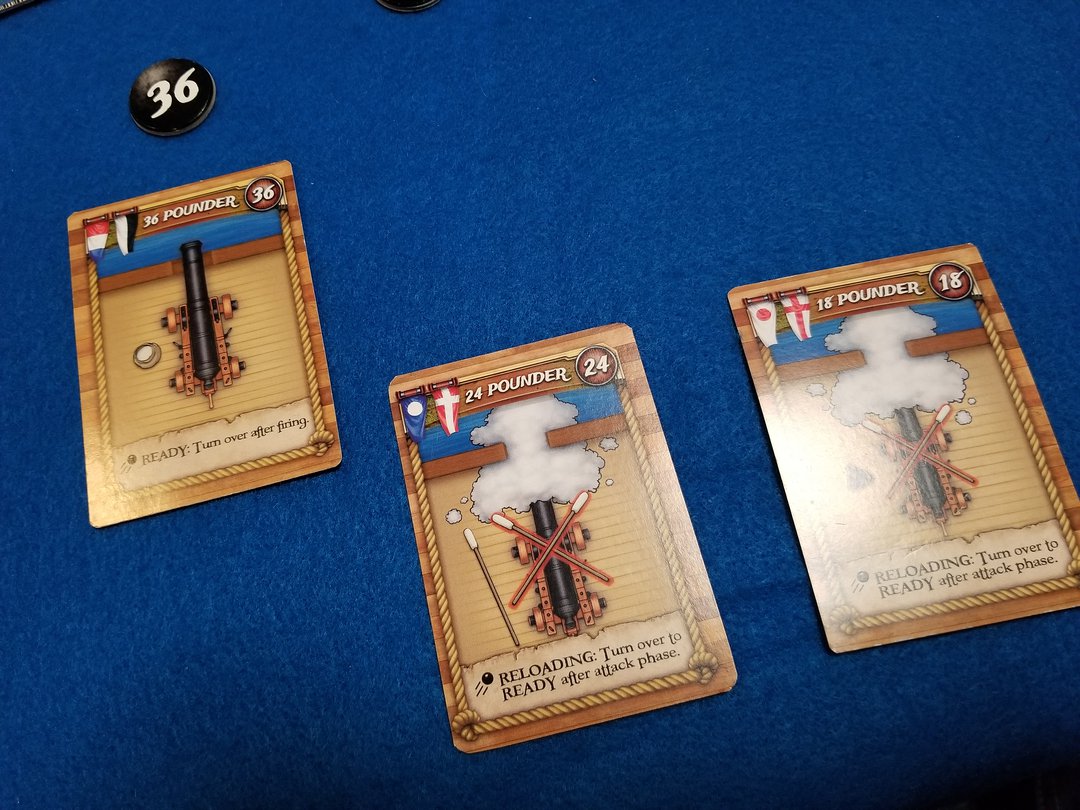 The cannons flip backwards as they recoil from firing! A nice little touch that shows just how much attention goes into the little details of this game.

A Fun Fight In A Humble Package

This shipfaring game never feels cumbersome or bloated; It hits that satisfying sweet spot of remaining quick and engaging for its duration. I think a full game of it took us about 30 minutes, and that included the rules explanation. I really cannot say enough good things about Clear the Decks! - It’s a modest $30, and with shipping tops out at $34 in the US. The project is also listed as shipping friendly to the EU, Canada, and Australia. That’s a solid deal for a solid game. If the historical theme or the idea of a co-op on the high seas interests you, I strong encourage you to check out their Kickstarter while you still have time: it’s not long until this ship sails for good.