Devil In The Details:
Finding Satan In Undertale

The Devil Went Down To Mt. Ebott

This is your final warning: this article contains major Undertale spoilers! 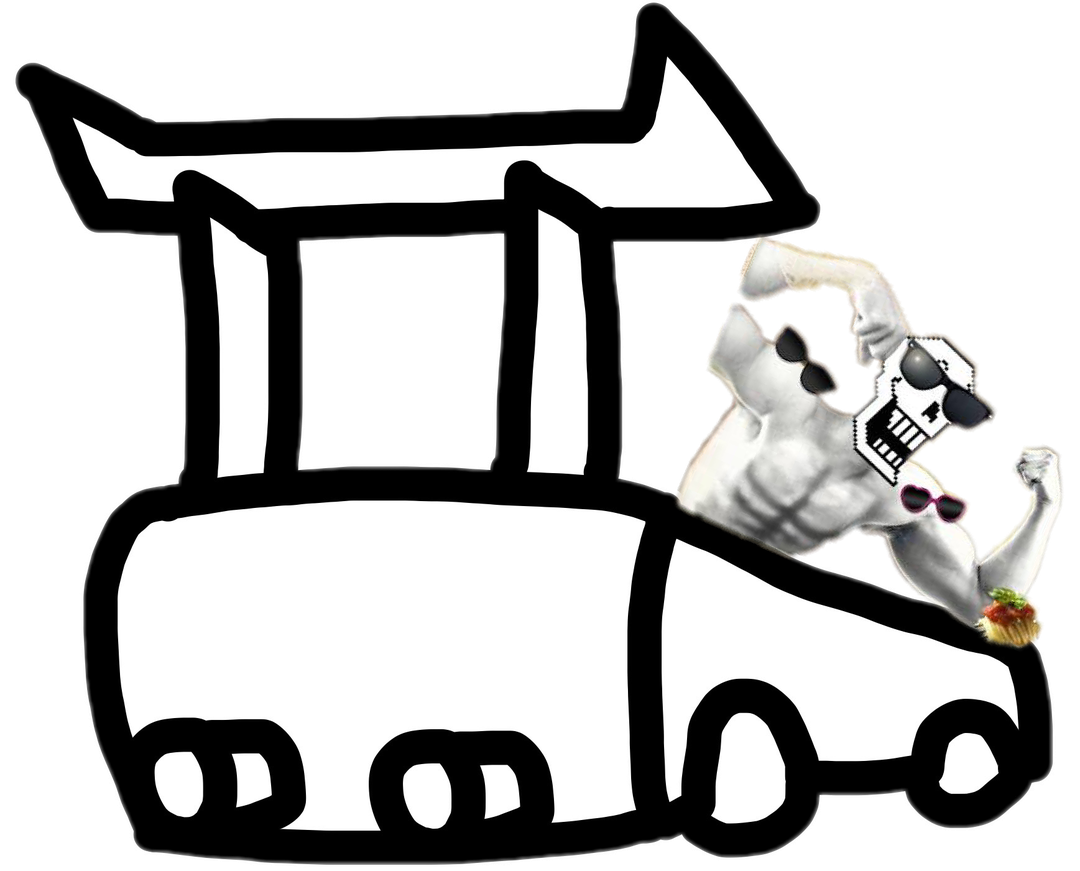 Undertale has some well-defined religious themes running through it. For instance, souls are real, tangible things in Undertale, and a major part of the plot involves a prophecy about an angel who will descend into the Underground and empty it out (see: The Harrowing of Hell). There’s also a rumor (unconfirmed) that Toby Fox initially planned to call the Underground the Underworld, but decided that was a little too on-the-nose. Regardless, the parallel between the Underground and Hell isn’t too hard to draw: a world below the human world to which the monsters were banished and trapped for eternity.

One of the last bosses you face in Undertale is Asgore Dreemurr, the king of the Underground. Asgore is a tall, broad-shouldered monster with goat horns who fights using a bright red trident, a weapon that closely resembles a pitchfork; the imagery here is obvious. However, it turns out that Asgore is actually a very kind being trapped in an impossible situation, and so the devil parallel gets turned on its head. The angelic and demonic imagery associated with the Dreemurr family could be a whole article in itself, but that’s not what I’m here to discuss.

The devil does exist in Undertale. It’s not Asgore, and no, it’s not Flowey either. In fact it’s not a monster at all. The devil in the Underground is the first human to fall into it, the nameless character most commonly known as Chara. 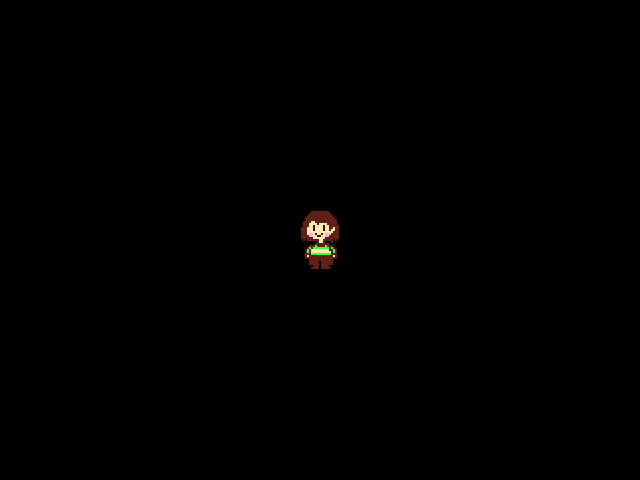 Man is the real Monster, and all of that.

No horns and pitchfork here. This just looks like an ordinary kid. So how does one get the devil from this character? Pretty easily, actually, by studying the little information we’re given.

You can get some clues on the Pacifist route, though you don’t encounter Chara except on a Genocide run. What we do know is that Chara fell into the Underground a long time ago and became friends with Asriel, who was Asgore’s son and the prince of the monsters. They came up with a plan for Asriel to absorb Chara’s soul, cross the barrier, and collect the remaining six human souls they needed to break the barrier and free the monsters. Incidentally, a monster who absorbs seven human souls essentially becomes a god, and it’s likely that at that point Asriel could have destroyed humanity by himself. Luckily for (almost) everyone, it didn’t work out that way. Asriel crossed the barrier, but he resisted Chara’s influence and refused to kill the humans. The humans attacked him and he crossed back into the Underground, where he died of his injuries and both of their souls were lost.

So there is some pretty solid evidence that something’s not right here. Chara, a human, comes up with a plan to kill six humans and free the monsters. That would almost certainly reignite the war between the two races, and lead to a lot of death on both sides. 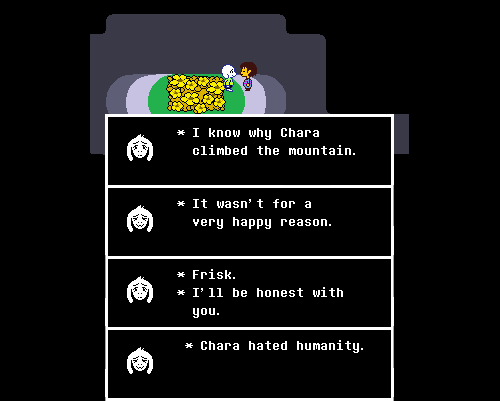 So this person’s either outright evil or extremely disturbed. However, misanthropy and a murderous streak alone aren’t solid grounds for a comparison to a religious figure like the devil. However, there is plenty of evidence painting Chara as something more than just a killer.

You actually get the first clue before you even start playing, though you don’t realize it at the time. The first thing you’re asked to do is “name the fallen human.” One of the major twists in the story is that it turns out you aren’t naming the character you play as, but the first human to show up in the Underground - that is to say, the person whom most Undertale fans know as Chara. However, what’s important here is the wording: the fallen human. It could be literal, since Chara did fall into the Underground, but it also draws a distinct parallel to Lucifer the fallen angel. 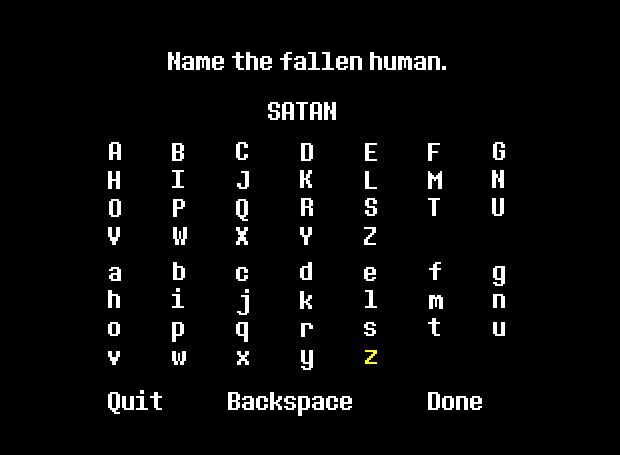 As you can see, this screenshot conclusively proves my theory.

At this point I wouldn’t blame you for thinking that I’m reaching a bit too far on this theory, so now I’m going to get into the meat of it.

Chara only shows up at the end of a Genocide run, when you’ve gone out of your way to find and kill every monster in the Underground. You get a whole speech about how Chara has been with you the whole time, but it was your actions and your power that woke the demon. 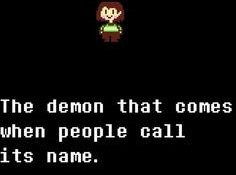 Chara's own words, by the way.

You’re given a choice whether to erase the entire world of Undertale or not, but it’s not a real choice. Chara will destroy the world no matter what you decide. If you choose not to destroy the world, Chara merely takes that as an opportunity to gloat over your powerlessness before going through with it anyway. It's the only interaction you have with Chara, and it's a lie.

“When he lies, he speaks his native language, for he is a liar and the father of lies.” John 8:44

You’re left with nothing but a black screen and a distant sound of wind. However, that’s not the end of it. If you wait on that black screen long enough, Chara will speak to you again and offer to restore the world. What do you have to give in return? Your soul. In true Faustian fashion you’re given what you think you want - that is, the ability to bring your friends back, reset the game, and continue on like nothing happened - but it proves to be your undoing. Once you’ve made this deal you can never have a happy ending again. Once you've made this bargain, going through the Pacifist route again gets you a twisted version of the good ending wherein Chara takes over your body. This is commonly referred to as the “Soulless Pacifist” ending, and it’s generally considered to be the worst ending possible. It means that Chara has escaped the Underground and is now free to kill monsters and humans alike. 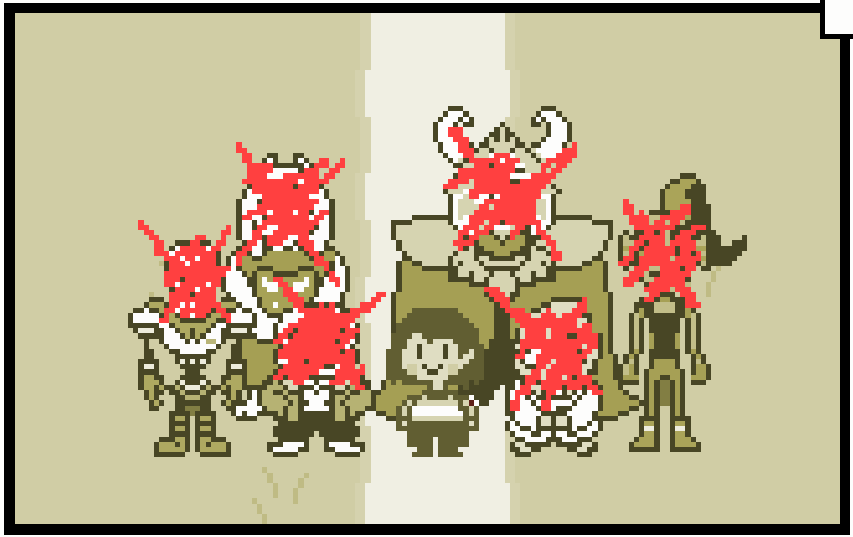 Remember when this was a happy picture of you and your friends?

That's basically all the information that we have, so let’s review: Chara came up with a plan that would have probably wiped out the humans, the monsters, or both. The plan failed and Chara died, but some soulless presence lingered on in the Underground. When Undertale begins that presence attaches itself to Frisk, but it's powerless unless Frisk gives in to the absolute darkest, most evil urges. This is highly relevant because, while not directly referenced in the Bible, it’s a common idea that you must somehow leave yourself vulnerable in order for the devil to possess you. The vulnerability could come from occult rituals, cursed objects like a Ouija board (or a Dungeons and Dragons set), or evil deeds such as, say, hunting down and murdering an entire race of monsters.

If Chara takes control, the world is destroyed. While what happens in Undertale isn’t as drawn-out and dramatic as what’s described in the Book of Revelations, it is absolutely the devil’s intent to destroy humanity and the world. If you’re persistent enough, Chara will eventually make a deal with you to bring back the world in exchange for your soul. It’s a literal deal with the devil, and you damn yourself by accepting it. No matter what you do (short of messing with the actual game files), you can never get a good ending again.

In short, Chara’s methods, goals, and powers are all remarkably similar to popular depictions of the devil. I wouldn’t go so far as to say that Toby Fox intended for Chara to literally be the fallen angel Lucifer, but the parallels are too strong to ignore. The devil is most definitely in the Underground, but it’s not the monster king with his horns and trident. It’s a small child with rosy cheeks. 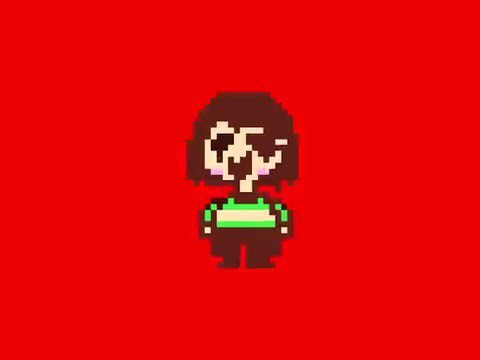 Chara’s role in Undertale is a topic of no small debate - the Chara Defense Squad is out in force. Please leave us a comment or drop us a line on Facebook and let us know your take on this issue. If you like what you’re reading, please consider donating to our Patreon so that we can continue overanalyzing our favorite games.