The Big Question: Why This Show With Our Other Hobbies? 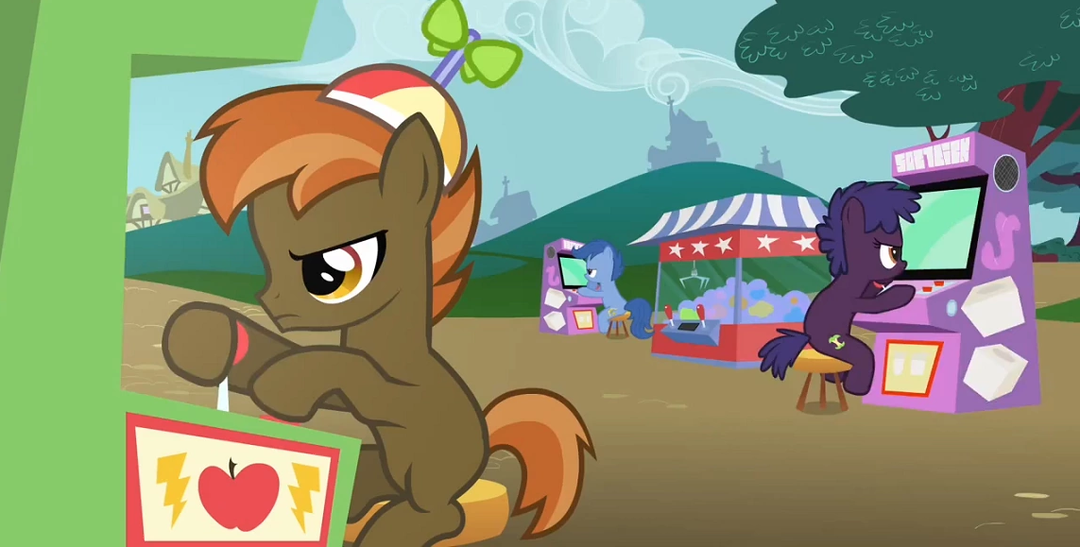 The biggest question I had going into Bronycon was: what is it that draws people to this show and this particular fandom? Are people drawn to My Little Pony for similar reasons that they’re drawn to gaming? I knew my own answers to those questions, but my primary mission at Bronycon this year was to seek more truth in the matter. Collect more data, if you will.

As it turns out, that work was done for me years ago. On Saturday I attended a panel hosted by Dr. Pat Edwards, a doctor of psychology better known to pony fans as The Brony Psychologist, or by his ponysona Dr. Psych Ology. Dr. Edwards has been formally studying bronies since the early days of the fandom and has surveyed more than 20,000 of them, which is more information than I could ever dream of getting.

Dr. Edwards is the world’s foremost authority on brony psychology.

Dr. Edwards’s panel included a brief presentation of his findings over the years, but was primarily for fielding questions from attendees. One thing that he mentioned more than once, which caught my attention for obvious reasons, was that many - perhaps most - bronies are also gamers. That finding is certainly borne out by what I’ve seen at Bronycon, which boasts a large room entirely dedicated to tabletop games and another devoted to video games. Why? What’s the connection?

If you recall from my previous article, my working theory about what drew so many people (myself included) to My Little Pony was the unfailing positivity of it. It's a source of joy in an often harsh world. While that much is true, it turns my theory was a little off base.

First of all, and this was more of a side note but is still relevant, Dr. Edwards mentioned that the MLP fandom is very easy to be a part of. While some communities demand that you jump through hoops before you can call yourself a “real” fan, basically all bronies ask is that you watch and enjoy the show. It is, on the whole, a very accepting group, and often meets social needs for people who have trouble fitting in elsewhere - I was on the money with that one. 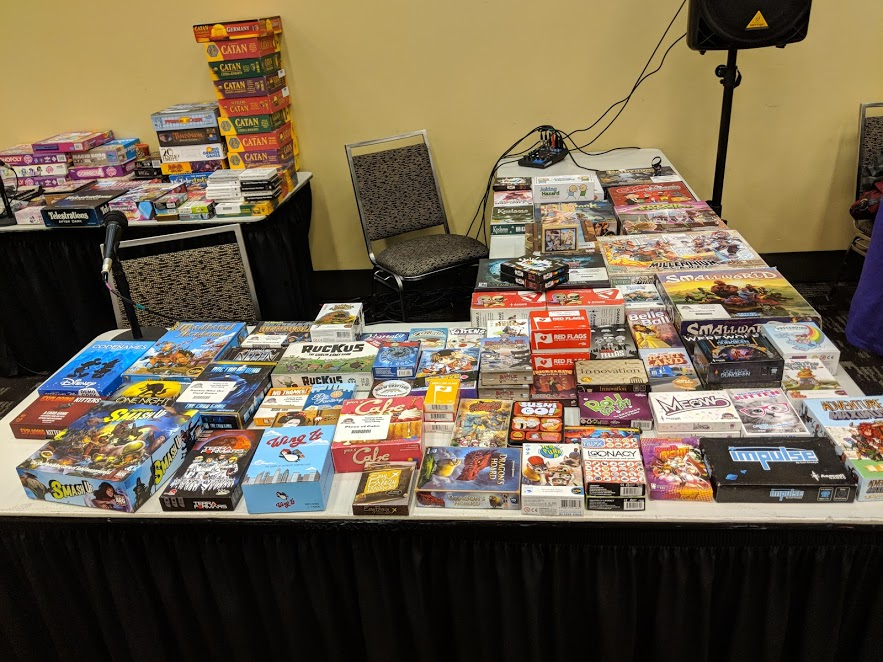 But to get to the meat of the question: while Pony’s positivity is undoubtedly a factor, according to Dr. Edwards the most common answer is that fans feel they are getting moral guidance from the show. Most of the episodes function as parables - stories about morality or life lessons. The ponies rarely, if ever, solve their problems by force. Generally, they talk to whoever is causing the problem and one way or another get them to realize that what they’re doing is wrong. When a villain absolutely needs to be defeated, it’s always done by an external magical artifact that’s powered by the ponies’ love and concern for one another. Friendship is Magic, after all.

Dr. Edwards also discussed how he had asked fans who their favorite MLP characters were and why. The most common responses were that they either saw something of themselves in that character, or saw that character as who they wanted to be. Taken together, this paints a picture of bronies who watch the show to see better versions of themselves and the world, and to learn how to grow toward that goal.

And really, that’s pretty similar to why a lot of us game. Not necessarily to learn moral lessons about life, but so that we can be someone else for a while, someone more powerful or more special than ourselves. That’s true of most board games as well; even relatively mundane games like Food Chain Magnate put you in charge of an entire corporation.

Another thing that’s appealing about games is the chance to test and hone your skills, whether you’re improving your reflexes and accuracy in Call of Duty or your strategic thinking and resource management in Terraforming Mars. Interestingly, studies have shown that games can improve a number of basic mental functions, and so-called “prosocial” games (that is, games that reward helpful behavior) can increase players’ empathy as well. The True Pacifist route of Undertale comes to mind there. 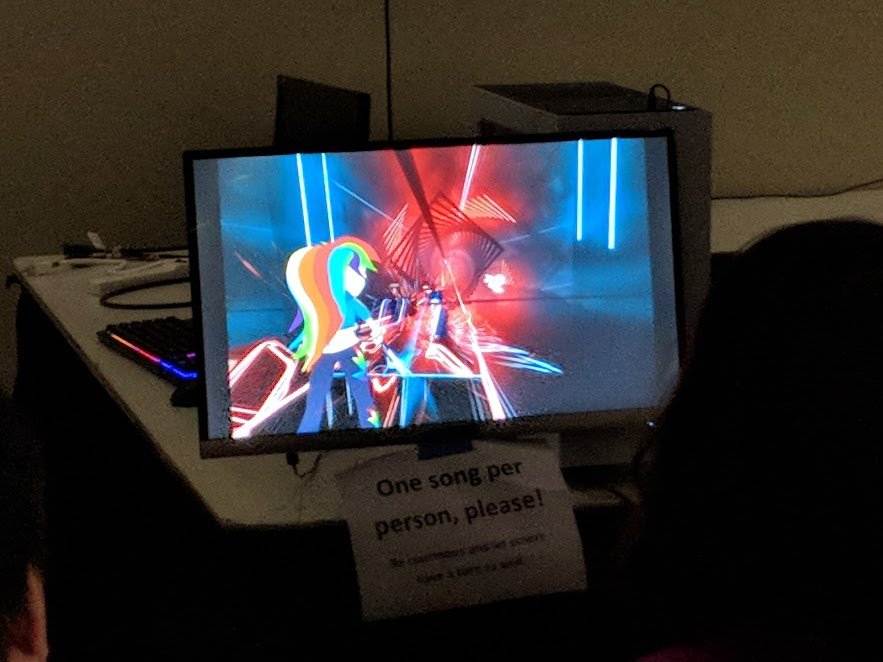 Beat Saber (with a Rainbow Dash skin) was one of the top attractions at the Baltimare Arcade.

While most games aren’t teaching moral lessons, there definitely seems to be a connection with the pony fandom in that people are looking for ways to improve themselves or to become somehow “more” than what they already are. Then, of course, the social aspect is common between the groups as well, especially for online gamers and board gamers.

I asked Dr. Edwards if he’d found a definitive reason why so many bronies are also gamers, and he believes it’s mostly just a function of the demographics. Simply put, if you look at a group where the majority are young men in their teens and early twenties, odds are there will be a lot of gamers in that group. However, he also said that most of what people do is driven by need - people naturally seek out things that meet their physical and emotional needs. 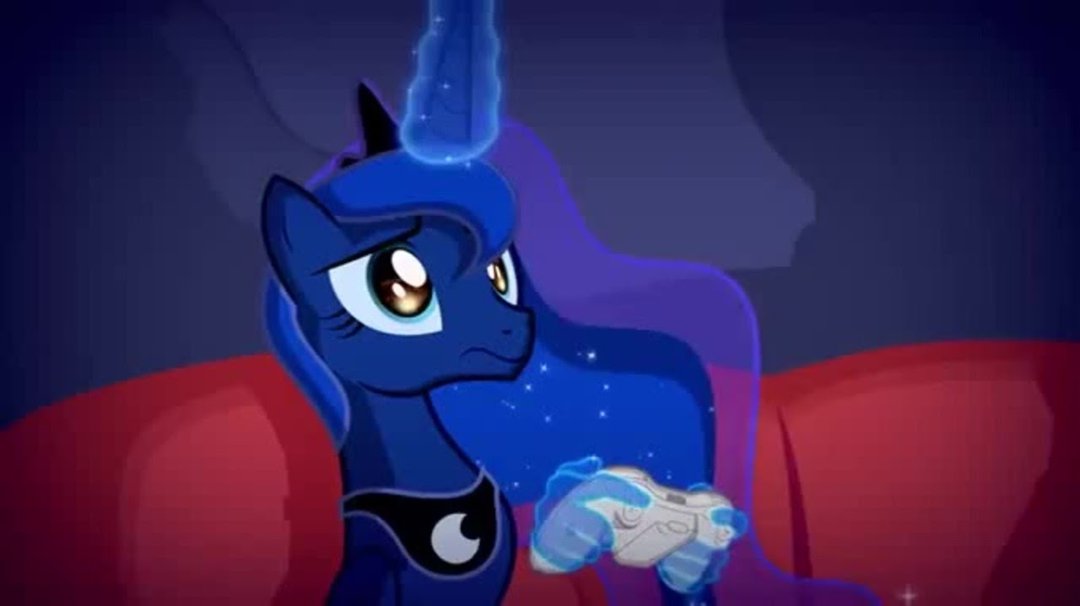 Of course ponies can game!

That was the answer I was seeking. For many people, both My Little Pony and gaming are helping to make up for things they feel they lack, and there’s a lot of overlap in what those things are. Whether gamer bronies are seeking moral guidance, a social group, or simply a creative outlet and a bit of escapism, the link is stronger than you might expect. I know it took me by surprise. Hopefully it gives you pause for thought the next time you're thinking about your gaming group or online raid buddies, too.