"Offensive Adult Party Game" Highlights The Worst Side Of Our Hobby

Kickstarter Raises $8,616 To Insult People Who Play Cards Against Humanity

At Sprites and Dice, our mission statement and the first thought on our minds is to be a positive voice in the gaming community. While this is usually a rewarding goal to work towards, it sometimes means that we need to call out negativity and toxicity. Unfortunately, that is what I feel I must do today.

When Satire Crosses The Line

A recent Kickstarter campaign by The Dragon’s Tomb raised $8,616 in 30 days to produce and distribute Offensive Adult Party Game, a satire of Cards Against Humanity. It’s a simple product with a low price tag; for only $10, backers could let everyone know their disdain for people who play the “wrong” kind of game.

Disappointingly - though perhaps not surprisingly - the campaign was successful, and 447 copies of Offensive Adult Party Game will soon be on their way to backers. Hatred for Cards Against Humanity and similar games runs strong in the board gaming community, and plenty of people thought this idea was hilarious. Even some relatively big names, some of whom I have a great deal of respect for, came out to support it.

Some people believe that such games show us and our hobby in a bad light, which is a point that does have some merit. Others just think that - similar to The Mind - they’re too simple to be “real games,” whatever that’s supposed to mean. Whatever your own thoughts about Cards Against Humanity may be, we should all be able to agree that lording our “superior” taste in games over its fans is not the right way to address the issue. Unfortunately, that’s exactly what Offensive Adult Party Game does. 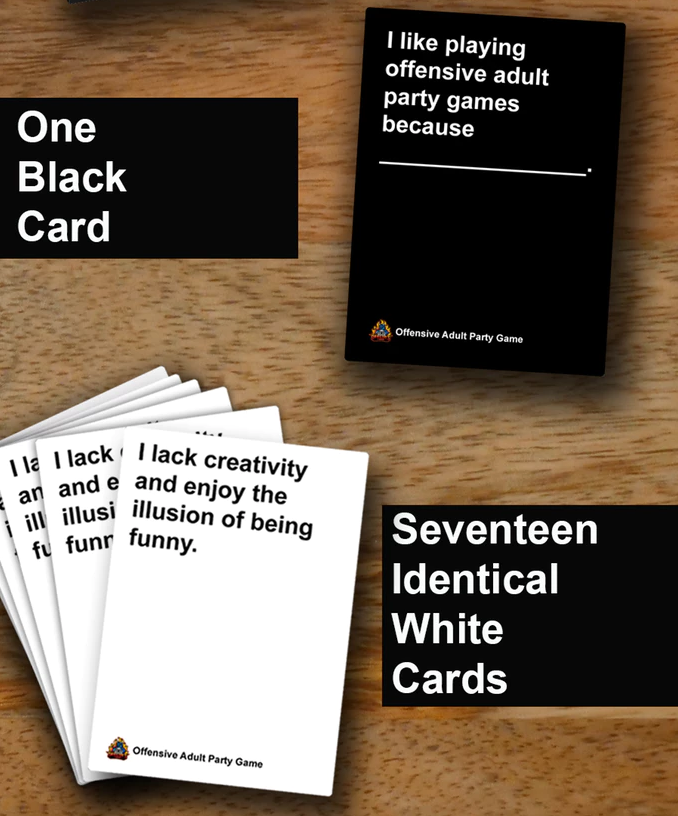 The $10 reward tier consists of these cards and the box they come in. That's it.

It’s the worst kind of gaming elitism, the kind that says, “This game is bad and you’re bad for liking it.” It’s hurtful on a personal level and harmful to the community. If you don’t like Cards Against Humanity, then don’t play it. If you think it makes us look bad, say that and explain why you think it’s a problem. If you don’t want it at your local gaming events, don’t allow it. However, Offensive Adult Party Game is the sort of personal attack that has no place in a healthy gaming community.

Our editor Adam shared a story with us when he first heard of this Kickstarter: He was at a board game event in another city, and the person running it rather loudly voiced some negative thoughts about Cards Against Humanity while a group of people there were playing it. Needless to say, those people declined an invitation to join in a different game and left soon after. One of my own friends won’t come out to our local game nights after someone else at the event continuously insulted Magic: the Gathering, which was his game of choice. This kind of toxicity is, sadly, still pretty prevalent.The fact that Offensive Adult Party Game raised $8,616 from 469 people says a lot about us, and none of it is good.

We Should Build Unity, Not Division

Now, I have no doubt that some people will say that it is a good thing; that we want to drive off the people who play Cards Against Humanity and other such games. To that, I say that plenty of us are old enough to remember when gaming as a whole was much less accepted than it is now. We had to hide in corners of classrooms or in our parents’ basements to play without being derided or mocked. I say that there comes a time when we have to look at ourselves and ask whether we want to do the same thing that our bullies used to do. Do we really want to be the kind of people who exclude and mock others for liking the “wrong” things? Do we want to further divide a community that is trying to become inclusive instead of exclusive? We should be condemning that kind of thinking, not starting fundraisers for it.

White Card: Holding A Mirror Up To Us, And It's Time To Reflect.

Now, I am willing to give the benefit of the doubt here and say that I don’t think any harm was intended by making Offensive Adult Party Game. It was, primarily, a way for The Dragon’s Tomb to get some funding for their channel and sell some merch to fans. However, it does show very clearly that there are some deep issues in the gaming community to be addressed and some difficult conversations to be had.

If you backed this Kickstarter, take a moment to ask yourself why. Why is your dislike of Cards Against Humanity important enough that you’d spend your own money to bash not just the game, but the people who enjoy it? If you backed it just to support The Dragon’s Tomb, then take a step back and consider what you actually bought. If you are a CAH player who bought this to add to your own game, then good on you for being able to laugh at yourself, but I still can’t and won’t stand behind this kind of hurtful product.

To the Kickstarter creator himself: You’re better than this. You can make funny and engaging content without resorting to insulting people, and you can poke fun at a game without bashing it. I know you can, because I’ve watched your video; you’re a really funny guy, and you seem like a nice person. I hope that in the future, we can find better ways to fundraise without mocking others.

The Kickstarter campaign for Offensive Adult Party Game has ended, but here is a link if you’d like to see it for yourself.