The Hottest In Board Game News From PAX East 2018 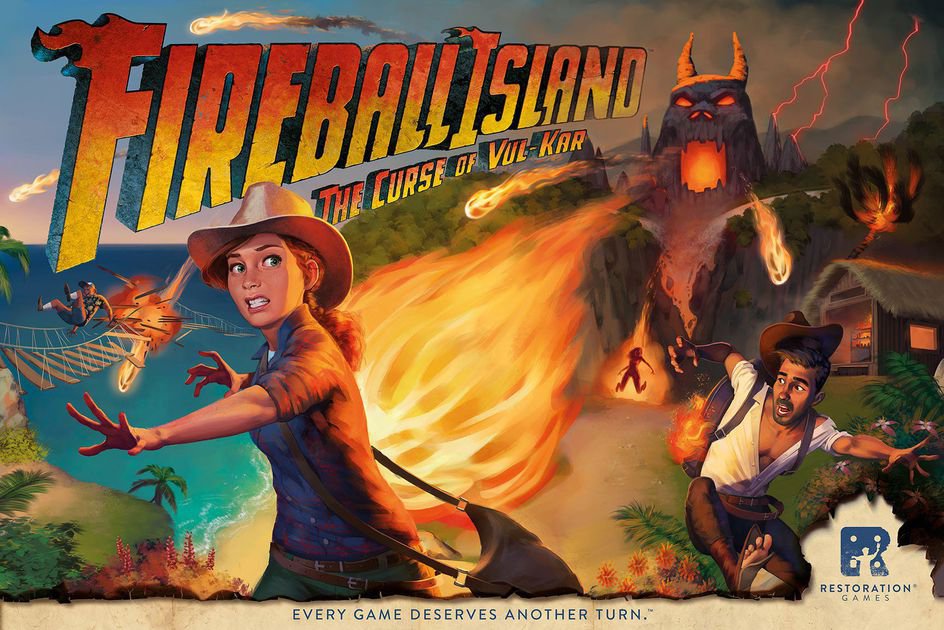 To say it’s as hot as the fireballs it lobs at its players would be an understatement. At the time of writing, Fireball Island, by Restoration Games, has raised over $1 million in just its first few days on Kickstarter. I got a chance to try it out at PAX East, and I’m here to spread the word on this one-of-a-kind game. If you’ve been sitting on the fence, hesitating on whether to back this game or not, wait no longer.

Fireball Island, in classic Restoration Games style, is a remake of what was a much beloved but much dated board game from decades past. I never owned the original, so I have no nostalgia driving me on this one, but I hear many people talk fondly of it. The problem with the original was that it was essentially a roll-and-move game with take-that (in the form of marbles shooting down the board to knock over the players). Sadly, I’ve seen this criticism levelled against the remake that, while it’s been given the modern makeover with different scoring conditions and a bit more control over the fireballs, the game is still essentially a roll-and-move with elements of take-that.

Editor's Note: please keep in mind all components you see in our photos are prototype components. As great as this looks already, the final game is going to look even nicer. Some rules may also be subject to minor tweaks and balancing leading up to final production. 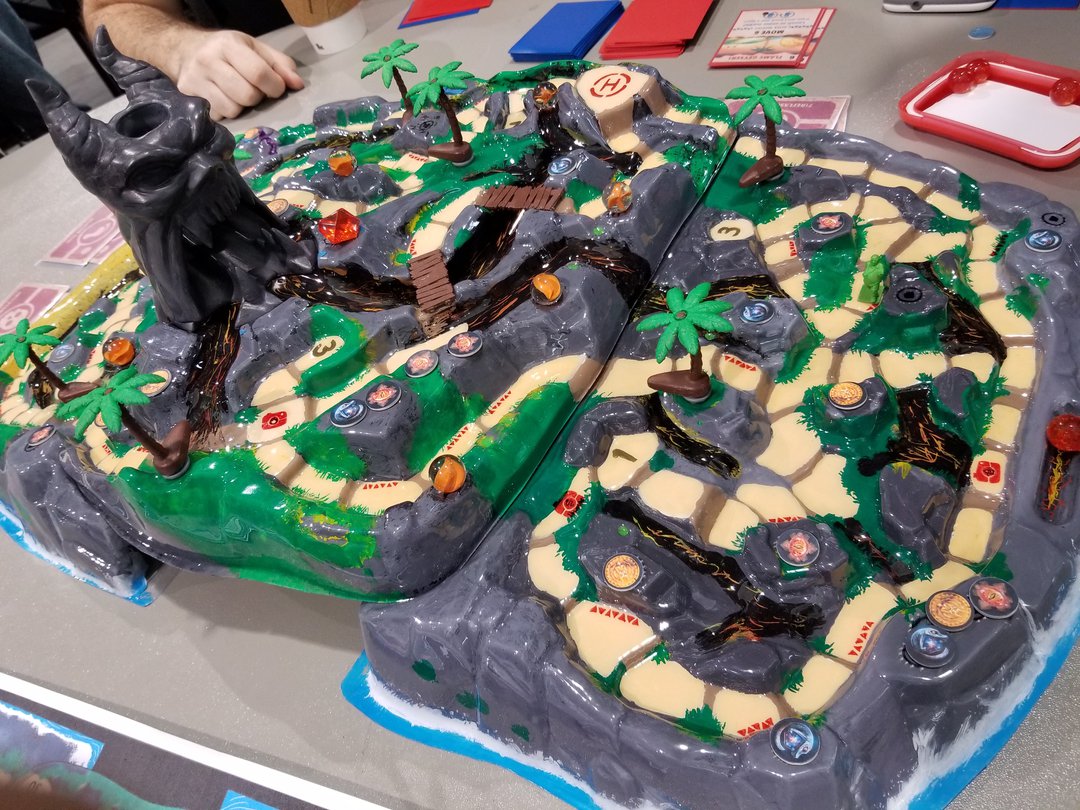 The perfect place for snapping some selfies, taking your metal detector to the beach, or toasting some marshmallows!

Smart Design For A New Generation

In a game with standard dice rolling, while statistics tell us that rolls should fall on an even distribution based on probability, anyone who’s played something like Catan knows that engine occasionally just breaks. You can roll five turns in a row and have nothing to show for it. Other players, at the same time, can be rolling in resources. Fireball Island replaces dice, and this is key, with a deck of cards. What's the big deal, you say? Well, those who criticize the cards as just being a modern version of roll-and-move miss one key point: the deck is tuned perfectly to counteract long term “bad luck”. Sure, most of the cards have middling movement values, with a few high and low value cards at the extremes, but once you’ve played a card, it’s out of rotation until the discard is shuffled. This actually prevents you from having an extended stretch of “bad rolls.” Furthermore, since cards are used for movement, they are printed with adjustments to compensate for their power (or lack thereof); low values have useful abilities to hit other players with, and especially high values do things like prevent you from picking up treasures (one of the new scoring additions).

There is also a separate deck of “souvenir” cards. Special powers you can take every time your figure is knocked over. You get one to start the game, but the way these can compensate you for getting beat on provides a nice little comeback incentive. How you save them is a strategy all in itself. In my game, I was the only player to not make it back to the helicopter, a point loss that cost me the game; but if I’d saved a map card I found earlier, I could have guaranteed a quick exit through the island’s cave system. Next time I’m going to save that card until the last possible moment. 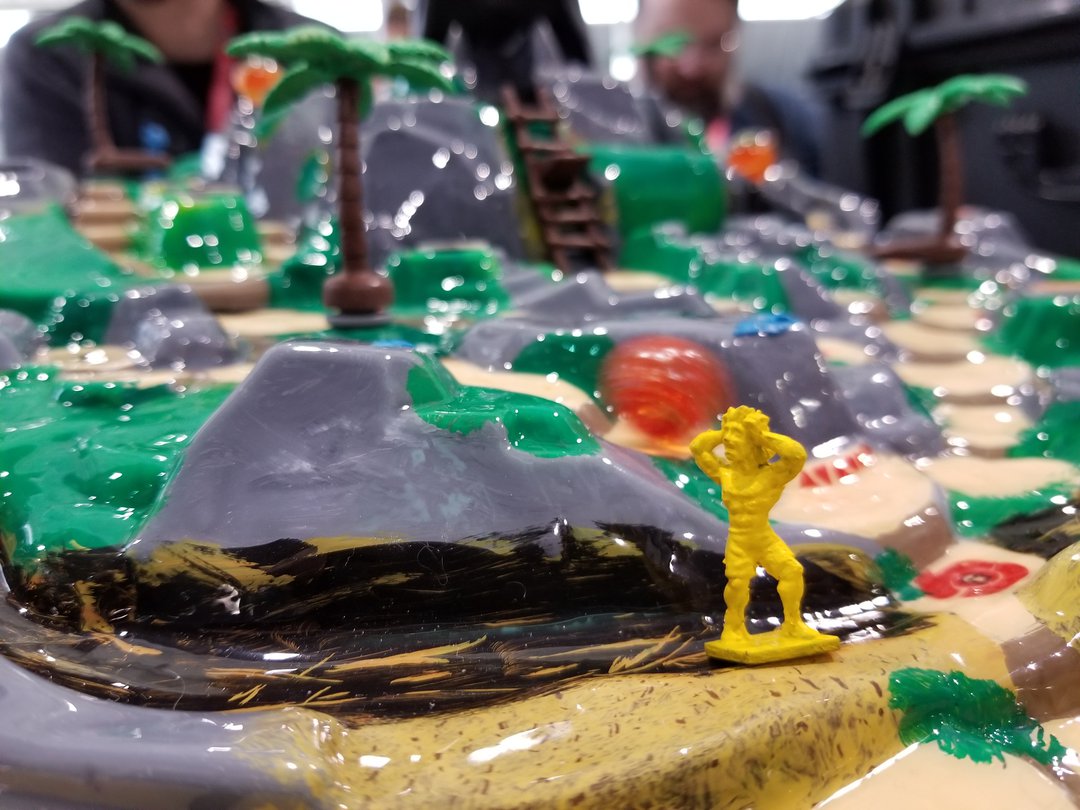 Fireball Island really grew on me the further into our game we got. How do you choose to collect sets of treasure tokens? Is a particular photo point (another scoring and endgame condition) worth exposing yourself to an angry Vul-Kar? Do you dare make a grab for his heart gem? (I witnessed both a game where it was taken almost immediately and one where no one had the guts to get anywhere close to it). I would say this game is as masterfully crafted as we’ve come to expect from Restoration Games. It has just enough character in the molding of the board itself to ensure you’ll mostly get blasted by similar shots, but there’s always a chance you escape unscathed. And this is before we even get into turning Vul-Kar or rotating the pinball-flipper trees to provide you cover.

There is one important caveat to all this before you decide to purchase, however. 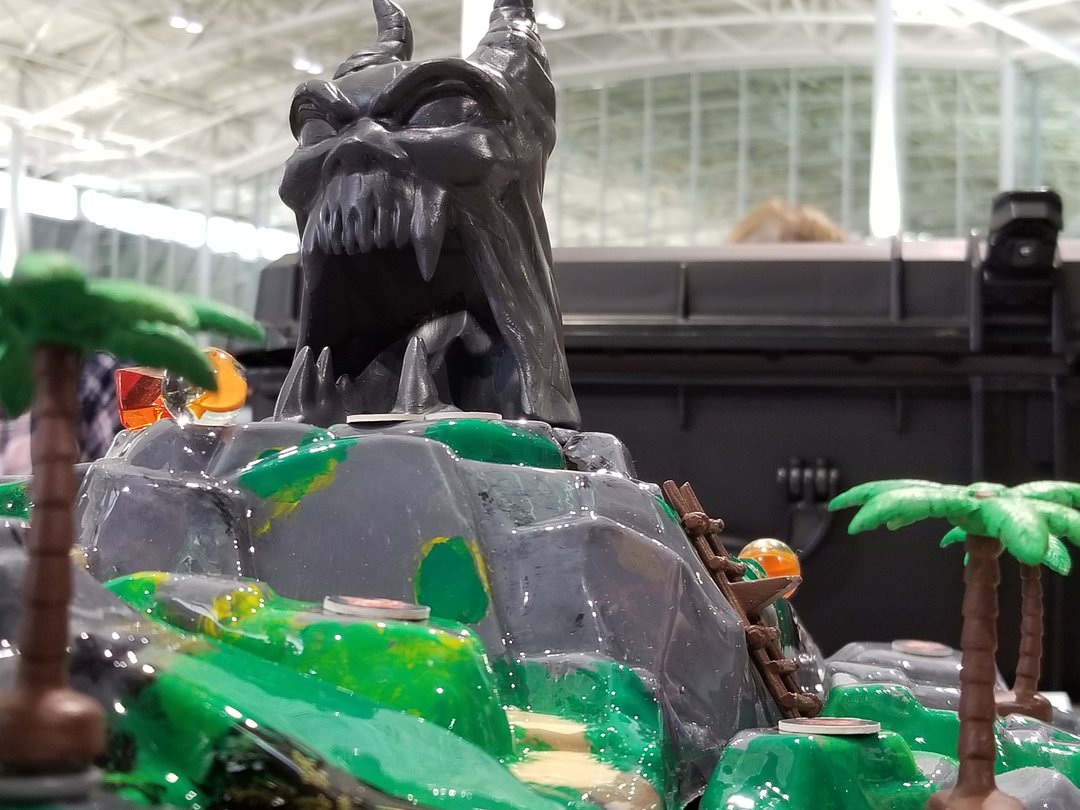 I Get Knocked Down, But I Get Up Again

You must be able to embrace the entropy. While it’s possible for you to survive this island with smart placement, rotations of the protective trees (that alter the marble paths), and clever hand management, chances are you’re going to get hit in any given game. Several times. This is not some kind of perfect information strategy game. You need to roll with the punches, or the marbles as it were. Hit back! If someone steals your treasure, you just need to pick yourself up and get some more. Heck, return fire and steal it back from your opponents! For this reason, if you are the kind of person who enjoys games like Galaxy Trucker or Cosmic Encounter, wacky and sometimes random, I wholeheartedly recommend this game. If you cannot deal with a little bit of—yes I’ll say it—balanced and measured take-that, this is not the game for you.

If, on the other hand, you imagine yourself getting just a little rush every time you drop those orange marbles down Vul-Kar, watching like a child in front of a pinball machine as they pachinko down the board, then definitely go check out their Kickstarter.