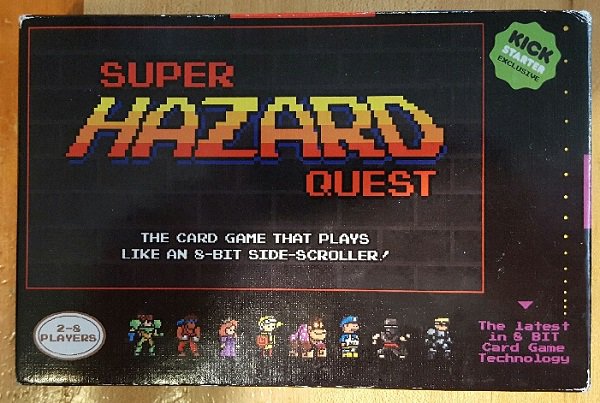 Two reviews from me in a month that involve pixelated products; I know how this must look, but I can explain. I'd like to take this moment to remind the ladies and gentlemen of the good readership that Sprites and Dice as a whole doesn't seek to review things in the traditional sense. If you want an opinion on why a game is simply good or bad, there are plenty of other places you can get such information. Specifically, why spend the next five minutes of your life reading about why you shouldn't buy something when you can read about something else you could buy instead? There are so many great games out there you could be playing, some of them just emerging. Super Hazard Quest is one such game. Also, I swear I'm not biased to pixel art.

I want to say up front that Super Hazard Quest is already funded on Kickstarter. I'm not here to ply you for money on anyone's behalf to make sure this thing gets made. That's going to happen regardless (in fact they've exceeded their funding goal by an additional 10k). This is more of a Kickstarter shout-out, if you will. A wake up call for any interested to jump on the first print run while you still can. At the time of writing, the project is still open for funding for another 8 days (putting the end date around May 20th). It's quick, easy to teach, contains plenty of opportunity to poke at the other players, and really plays a lot like the classic 8-bit side scrolling adventure it purports to be. If that sounds interesting to you, then please, read on. 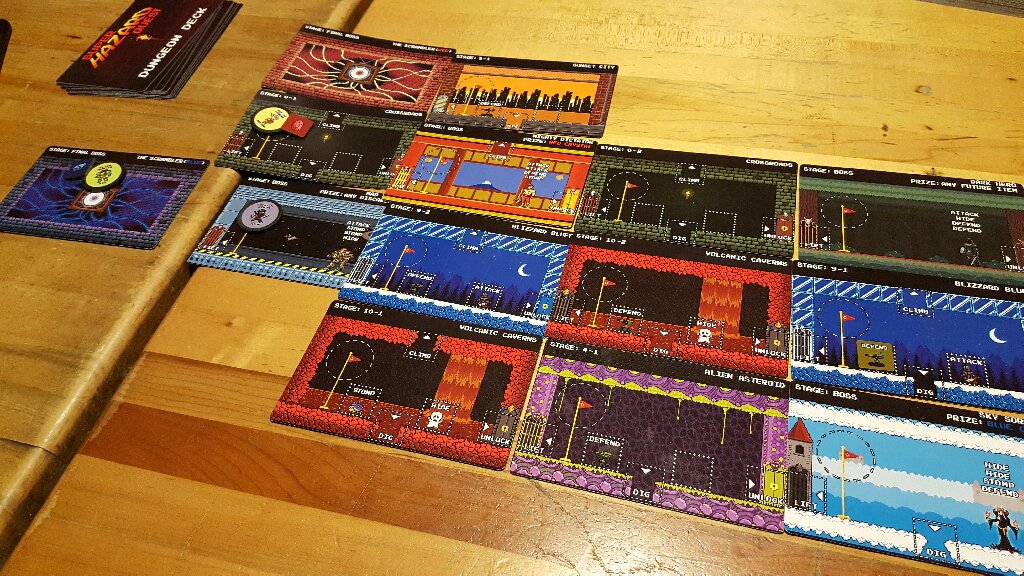 The dungeon is different every time you play

In what could easily have been the overarching plot of any 8-bit game of yore, each player controls one character, mimicking a classic pixelated hero of legend, in a quest to explore a dungeon, find a special crystal, and then take it to the matching color boss room to defeat said boss. On the way they'll have to overcome obstacles within rooms by playing item cards from their hand for their actions (and using their character's unique power which gives them unlimited use of a particular action). Adding spice to this mix are the fact that there are two bosses in the main box, red and blue, and only the crystal of a matching color will enable you to defeat that boss and win the game. Furthermore, to gain the crystal you need, you'll have to defeat one of several miniboss rooms. These will have you combine several cards into one large combo assault. Assuming you can do all this, you'll still need to manage carrying the crystal back to the boss room (or find it if it hasn't hit the table) while other players chase after you in an attempt to steal your crystal, and the glory, for themselves. The best part is, all of this can happen within about 20 minutes or less!

When I played the game with Ben Famiglietti and Mike Mendizabal, the game's co-creators, I was immediately struck by several big successes. One was that, despite the complex sounding nature of the game, I picked it up right away. The game is simply and snappy, just like an old 8-bit game. It's as easy as picking up a two-button controller and popping in a cartridge. I was also impressed by the depth of play it presented, just like and old 8-bit game. Sure there are only a couple of basic mechanics in play, but the ways you can combine them to aid yourself or hamper the other players give the game a surprising amount of life. As one such example, take the cards which allow you to put new hazards on the board. You could use these to lay down a trap that your character's special power allows you to waltz through (hindering everyone else but you), but they can also be used to initiate a hero battle with another player in your room. If you succeed in a hero battle, you can take an opponent's crystal for yourself. The game is full of these moments. How you use the cards is up to you. Finally, because of the exploration aspect, the different colored bosses, and the ability to steal crystals (of which there are an unlimited supply by the way), there is always a chance for a player who is lagging behind to suddenly come back for the win. This always keeps the game exciting and tense rather than watching one player run away with the lead. 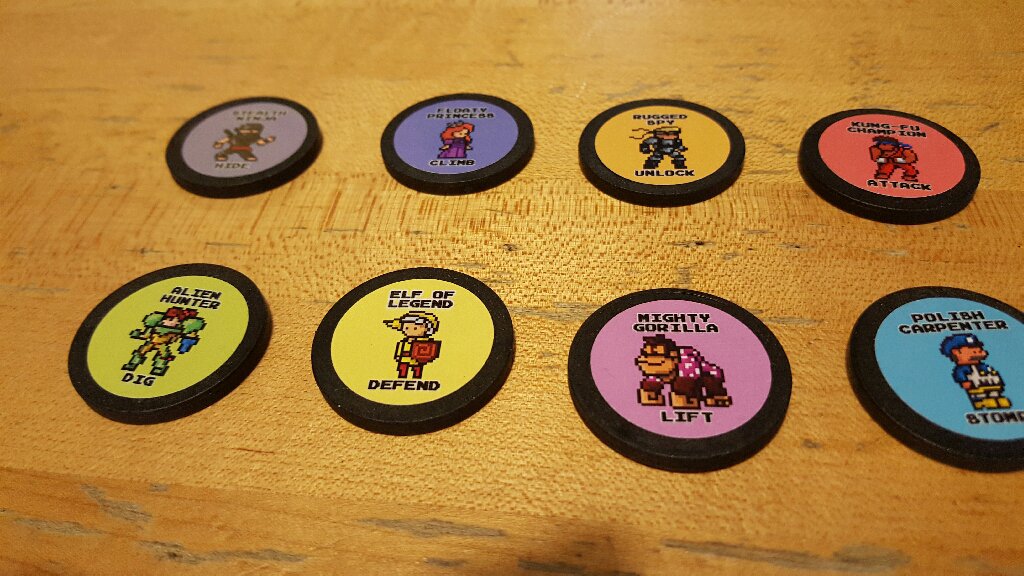 I was going to ask Ben and Mike what games inspired Super Hazard Quest...then I just looked at the tokens.

Have you ever been at a friend's party or around family at the holidays and someone brought out a game (video or board) that made you stop and do a double take? “That looks like a lot of fun,” you think. “I'm not sure what it is, exactly, but I want to give it a shot next.” This is one of those games. It doesn't forget that above all else, a game should be fun. In designing Super Hazard Quest, Ben and Mike talked to me about tweaking the rules whenever things got overcomplicated or bogged down. In perhaps the greatest tribute to building games that above all else are just plain fun, they originally played the early prototype of this game with a fellow co-worker at their office who wasn't a gamer. Imagine during one boring, quiet lunch they turn to her and say “Hey, we're designing a board game.” She replies that it sounds interesting, so they play it the next day during break. She likes it. They play again. She has a great time with the second game. It was then Ben and Mike knew they were on to something.

When I spoke to Ben and Mike, I had one big question on my mind: how, when we have things like emulators, would someone find it necessary to build a game that recreates that experience on the tabletop? Ben had actually played and liked some other board games currently on the market which claimed the experience of “building a dungeon” in a classic 8-bit style. They were directly inspired by the hit game Boss Monster, but found the focus wasn't where they themselves would want it. While these games were good, Ben said, they left him a bit wanting. The game he'd thought of didn't exist. He still wanted a dungeon to build and explore, replete with challenges to overcome on the way to the boss. Fortunately for us, he decided to do something about that, and combined with the expertise of his friend Mike, I was able to play a prototype that looked practically like the finished product. And that Kickstarter is available to you if you want a copy for yourself. 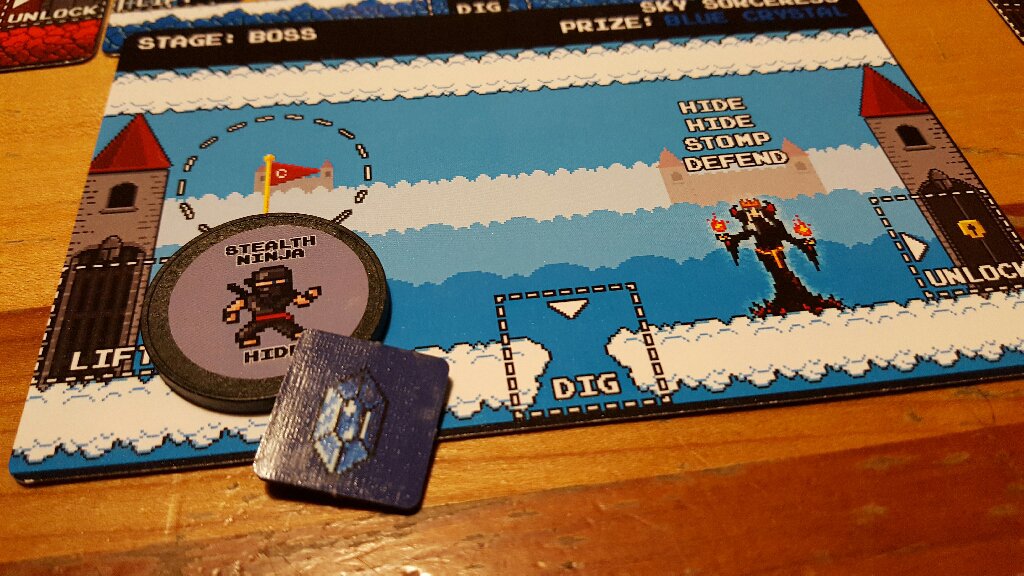 Ninja gonna get your crystal...

Finally, I'd like to say a word about death. If you've played any old school 8-bit games, you know that you can die just about as fast as you can step out of the area transition into a new room. That's just how these old games were. In one of the best nods to this that I've seen without sacrificing fun, this can indeed happen, but due to a system of clever checkpoints you're never out of the action for long. You'll always “respawn” at the last checkpoint you used. So unless a card you've played or a challenge that kills you dictates the end of your turn, you can potentially push your luck as far as your hand of cards allows. Do you want to blindly rush into the next room? As an added incentive, you get a free “super jump” to the next room's checkpoint if you ever manage to use all five cards in your hand in one turn. Of course, this may be a one way trip in itself if the room doesn't have a return door, but hey you can always just explore your way out or find a special item to warp you, right?

Mike and Ben have plans to release several expansions for this game. Depending on the level that you back, you can mix in between 1 and 3 sets of “extras” to enhance your games. Though they've already taken the best of the basic 8-bit tropes and put them in the base game, they've confirmed others are coming. Like a water level. And I've heard that, in the classic Nintendo style, there are no air meters! Imagine, having fun rather than managing your air reserves! Growing up as a Sega kid, let me tell you that air meters on the water levels were the bane of my childhood gaming existence. There are also plans to add a 3rd color boss, effectively making the game even speedier. Personally, I love expansions to simple games. If you want something easy and hilarious to break out with a new group, or to play casually, you can play the base game. If you want to add a few layers of added complexity, you can slot in some expansion material. In this way, you can give a simple game more the level of depth that suits your group. I'm always glad to see this in board gaming. 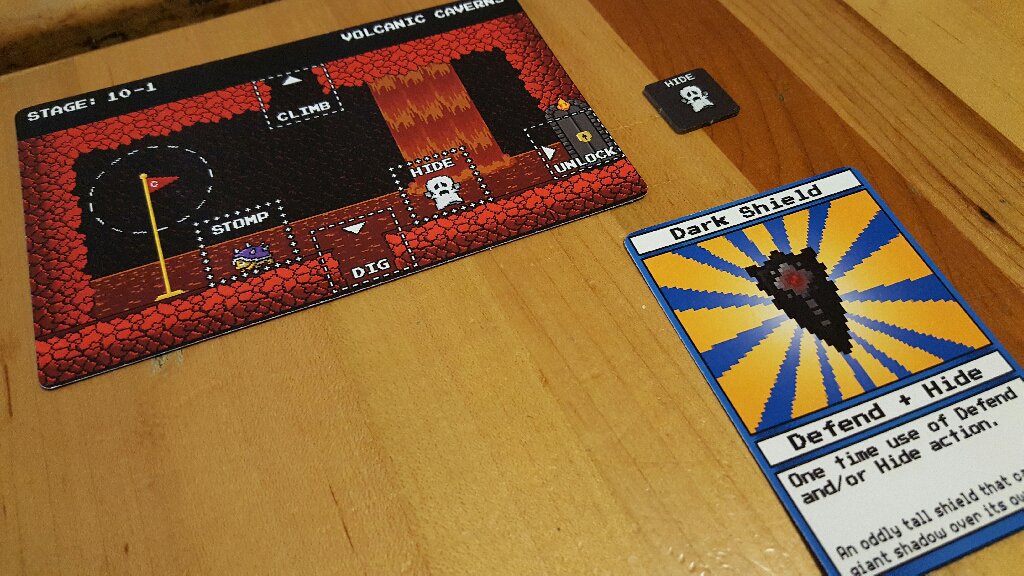 If you think this is something you'd like to get on board with, hit up the link at the top of the article (if you haven't already). There's a video on the Kickstarter page that gives even more views of the artwork and the setup of the game. And don't forget: if you have trouble getting the board game to start, just blow into the bottom of the box and try booting it up again.