You Are Now Cursed...Have Fun! 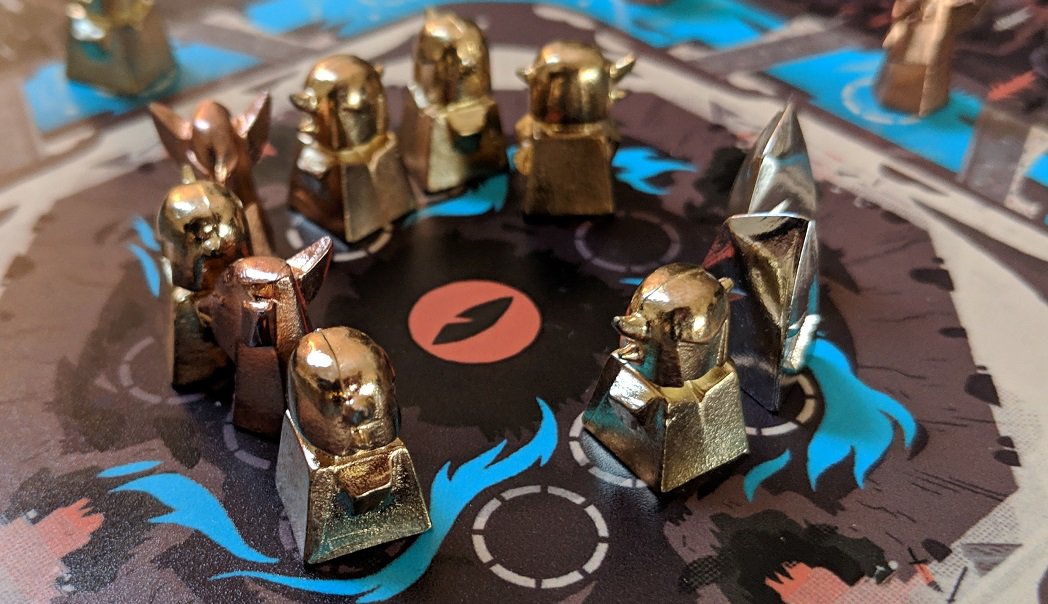 Life Siphon is the newest project by Lay Waste Games, best known for their village-razing, gold-hording, dragon-themed skirmish game Dragoon. Life Siphon actually takes place in the same world as Dragoon, though beyond that they have little to do with each other. I had a chance to try out a prototype of this game at PAX East, and I found it to be well worth taking a closer look at. 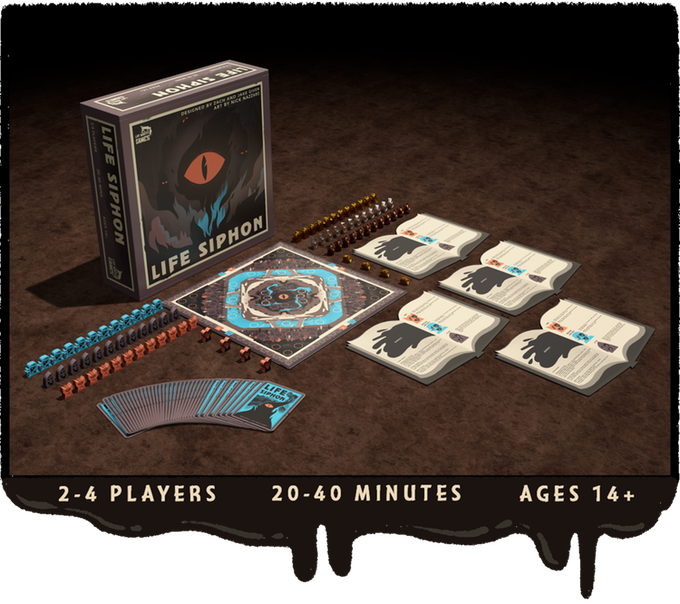 In Life Siphon, players take on the roles of the humans who have been driven underground by the dragons who rule the surface world. While underground, you find a mysterious black box with an orange eye on it. You open the not-at-all-suspicious box and find yourselves both blessed and cursed with the power to summon dark creatures to do your bidding. The catch? Well, there are a couple: You summon these creatures by offering up your own life force, and you can’t leave the room until one of your friends dies. Other than that, though, things are looking pretty great for you!

A Different Kind Of Wargame

Life Siphon has a pretty unusual design. You can only attack the player seated to your immediate left and, if a player’s life drops to zero for any reason, the person seated to that player’s right wins the game. When you’re playing with three or four players, that means that you may find yourself needing to protect the very person who’s attacking you. It's a strange twist to the Magic: The Gathering standard style of "be the last one left standing", but it works.

As I already mentioned, it costs you life points to summon your minions. However, at the start of each turn, you gain some life back. Playing Life Siphon is a careful balancing act between getting enough power onto the board and making sure that you can survive what your opponents throw at you. The best strategy here seems to be spending heavily on the first turn, then trying to recover as much as possible before the fighting starts.

In spite of its small game board, Life Siphon takes a surprisingly long time to get to the action; this is a good thing though, because it allows you to balance out that first investment you put into your creatures. There are four sections to the board, minions can only move up one section each turn, and attacks can only be made from the innermost section. Additionally, the attack step actually comes before the movement step - this makes sure that the starting player doesn’t get a huge advantage by attacking someone who’s not in position yet, but it also means that nobody can start attacking until turn four at the earliest.

And, of course, it wouldn’t be a Lay Waste game without some cards to shake things up. There are two types of cards: Slow cards can only be cast on your own turn, while Fast cards can be played at any time (like an Instant spell in Magic).Card effects range from raising a minion’s attack or defense for a turn, to looking at an opponent’s hand, to sacrificing a minions and giving life points back to its owner. The namesake card Life Siphon lets you directly damage another player, which can win you the game if used correctly. Naturally, the most powerful cards will also cost life to play, but they are well worth it.

It’s Weird, But It Works

Life Siphon somehow manages to be both very methodical and extremely swingy. The long build-up to the actual combat gives players plenty of time to see what’s coming and plan accordingly, but with everything costing life points (and only having 20 to start with) it doesn’t take much to tip the balance and knock someone out of the game.

Lay Waste allowed me to take one of their prototypes home with me, so we've had a chance to play it a few times with different people. While everyone has agreed the art design and the concept were absolutely top-notch, the most common complaint I’ve gotten is that it’s just a little too simple. There were only three types of minions we could summon and a few different kinds of cards, so while the gameplay was solid and easy to get the hang of, our options were rather limited.

The metal sculpts of the Goblin, Lich, and Dread Knight. There is an affordable non-metal version, but metal is the signature of Lay Waste Games.

Fortunately, that issue has been addressed and then some by the stretch goals of their Kickstarter campaign. The final version of Life Siphon will have three new minions, Essence Vials, and two beings called the Void Bringer and the Pain Maker. What do they do? I have no idea! They’ve also left space for additional stretch goals, so there may be even more coming down the pipeline. Regardless, it is clear that the final version of Life Siphon will have a lot more to it than the fairly basic prototype that we played with.

For $45 you can get the basic print of the game plus all stretch goals, and for $70 you can get the version with Lay Waste’s signature metal pieces. There are, of course, higher tiers with extra goodies in case you’re richer than I am, but $45 is all it takes to get all of the actual content. Life Siphon’s Kickstarter has two weeks remaining as of writing this article, so I highly recommend that you go check it out for yourself.