A New Take On An Ancient Threat 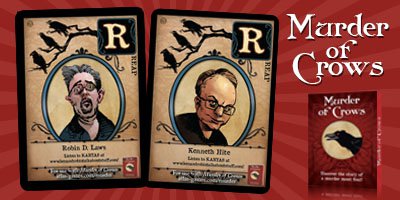 Cthulhu: Death May Die is the most funded board game on Kickstarter right now. The newest offering from Cool Mini Or Not certainly didn’t take strange aeons to meet its $200,000 goal - it was fully funded within fourteen minutes, and as of writing this article has met that goal nearly nine times over.

Designed by Rob Daviau and Eric Lang, the game rehashes the old Investigators vs. Cultists scenarios from games like Elder Sign and Pandemic: Cthulhu with a bit of a twist: The investigators have finally had enough of this nonsense. This time they’re not aiming to stop the ritual, they’re aiming to sabotage it; to let the eldritch god of the month enter our world, but in a weakened, mortal form, and put an end to it for good. 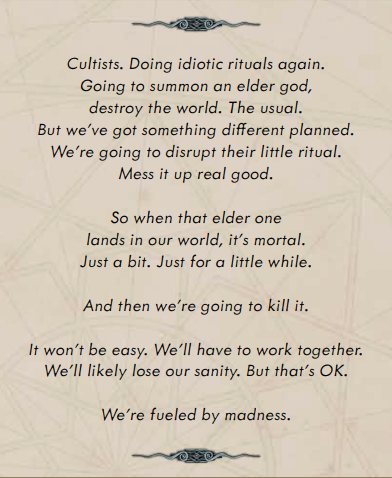 When the characters are as sick of rehashed Cthulhu scenarios as the rest of us.

Once More Unto The Breach

The basics will seem pretty familiar to anyone who’s played games such as Betrayal at House on the Hill or Elder Sign. You choose a scenario and an Elder One, combine their decks, and play. Each turn, the turn player gets three actions to move, attack, rest, trade, or perform an episode-specific action. Then the player flips over a Mythos card and something terrible happens. Then the enemies get their actions, then (if applicable) the Elder One gets to go. Investigators get Health and Sanity meters, and can lose if either runs out - although if you’re clever, you may be able to twist your Insanity to your advantage. You also lose if the Elder One manages to advance to the end of its track, as that means the ritual has been completed successfully and the Elder One is now immortal.

What’s less familiar is that, once the Elder One appears, the game enters a multi-stage boss battle that’s more in line with a video game than a board game. Each stage of the Elder One must be defeated separately, and each has a come-into-play effect as well as an ongoing effect, each of which stacks on top of all the effects already in play. It’s grueling, challenging, and kind of epic.

However, if you really want to see something epic, check out the R’lyeh Rising expansion, which serves as a sort of final chapter for Death May Die. It costs even more than the base game, but for good reason: the entire board is a massive Cthulhu miniature, and the players’ characters move and act on the base of it. The only comparable figures that I’m aware of are the most absurdly big and expensive models from Warhammer 40k, which can cost hundreds of dollars if not more. Compared to that, an extra $150 for the Kickstarter pledge seems pretty reasonable - then again, maybe “reasonable” isn’t the right word for any part of this. 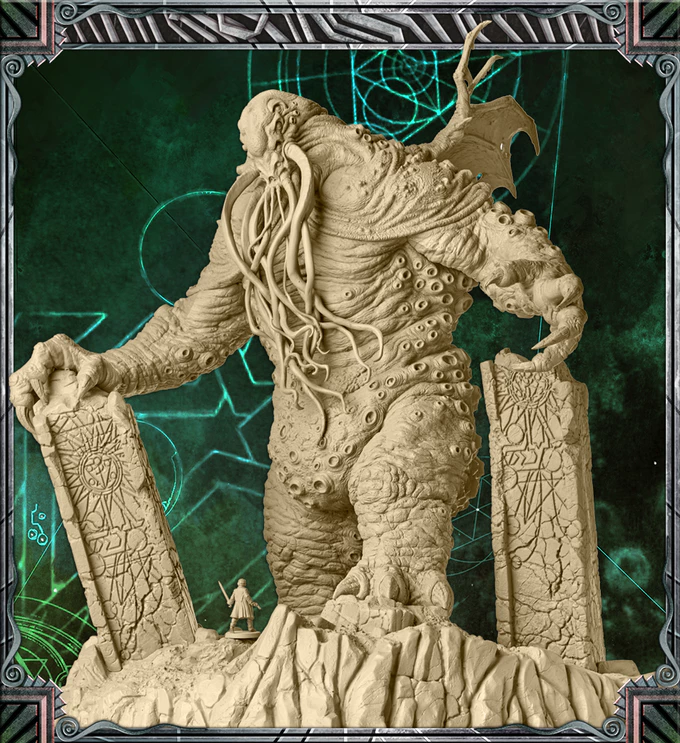 This thing is nearly two feet tall! Can you even call it a mini?

Madness Or Business As Usual?

What do we here at Sprites and Dice think about this? It's hard to say exactly. There really isn’t a precedent for figures-of-this-size-as-game-boards, though CMON isn’t any stranger to giving us absurd levels of plastic in our boxes via Kickstarter (looking at you, Rising Sun). One thing is for sure, from CMON’s track record and the images we’ve seen so far: there’s no reason to think that this game will be anything less than CMON’s usual. A solid game, lots of great components, and a hefty price tag. It’s probably justified for what you’ll be getting in the box, though, so whether all that game (plus or minus that expansion) is worth it to you is completely between you and your wallet.

For more details about the game, the eighteen(!) stretch goals that are already unlocked, or to watch the CMON team demo the game, check out Death May Die’s Kickstarter page.