Building Community, Both Online and Offline 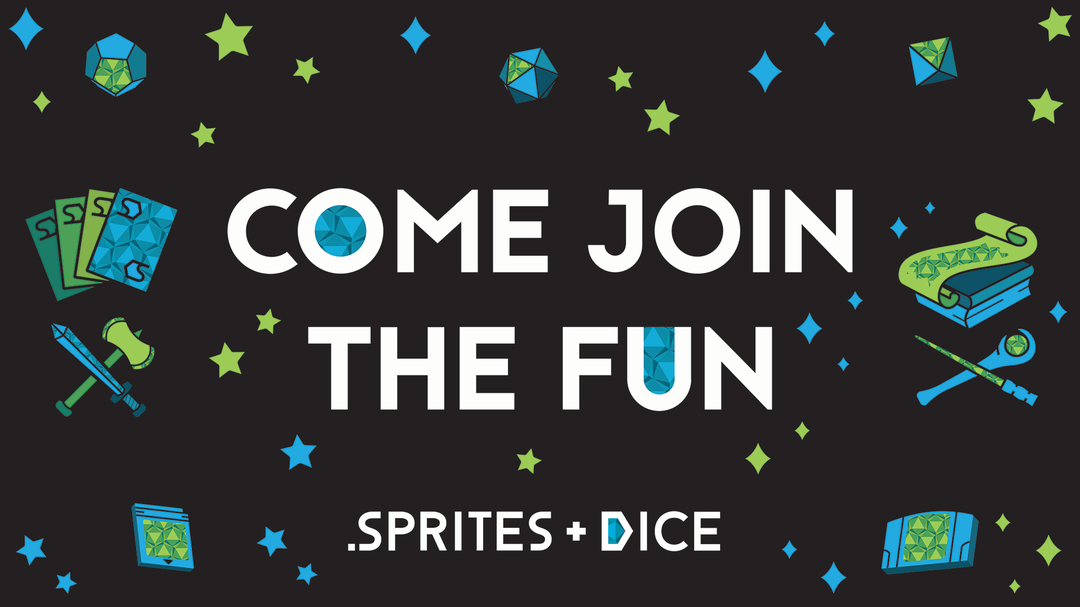 As a website about both video games and board games, its time to live up to both sides of the equation.

For the last two years, we’ve been running a game night every week in our hometown. Something small but fun; a group that’s slowly grown as we’ve played everything from Root to Dungeons and Dragons at the bars in town. It’s been an absolute blast, having the chance to share our appreciation of games directly with our readers and our friends.

Now, we want to take this show online.

Starting February 17th, we at Sprites and Dice are hoping you’ll join our humble Discord community at 7:30pm EST to play some video games! Curating a list of six different offerings, our goal is to have a chance to play some of the games we really love to relax during the work week while hoping to build up a space in the digital gaming community. 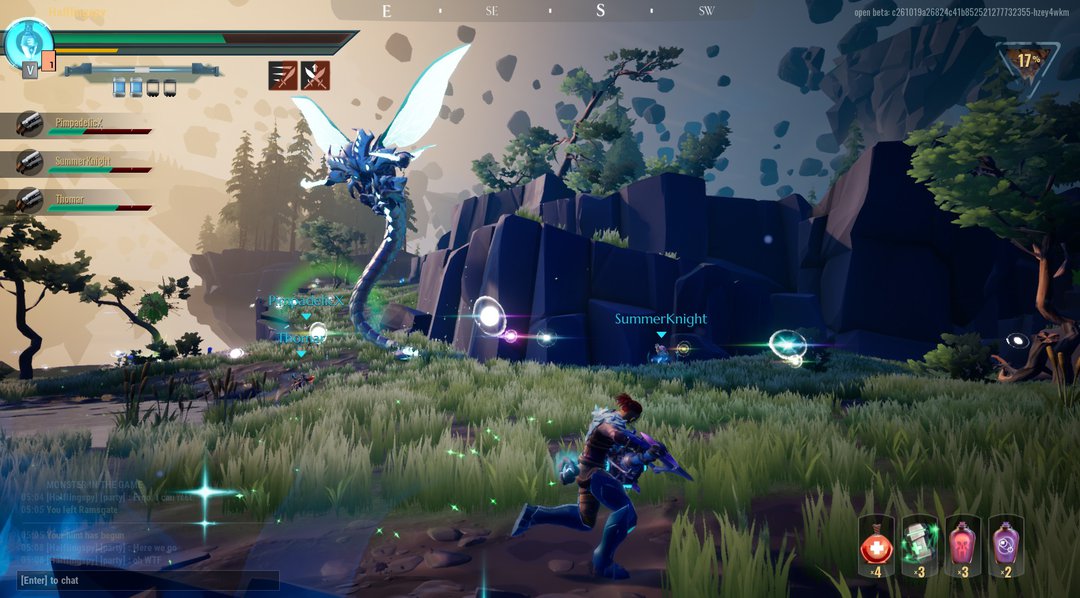 Hopefully, we won't continuously die horribly in the process.

Every Monday at 7:30pm EST, we’ll meet up and collectively choose from the following list what games we want to play. Many of these are co-operative, while others certainly are not. Don’t worry; we have multiple voice channels and will do our best to make sure people have a chance to play the game they wish.

Without further ado, here is our curated list of games we think will be fun in groups!

This one is a shoe in: it’s free to play, co-operative, and is packed with bright colors and giant monsters. We love Dauntless because it lets you work together to take down bizarre creatures without spending any money, and there’s nothing quite like using a shotgun-hammer. 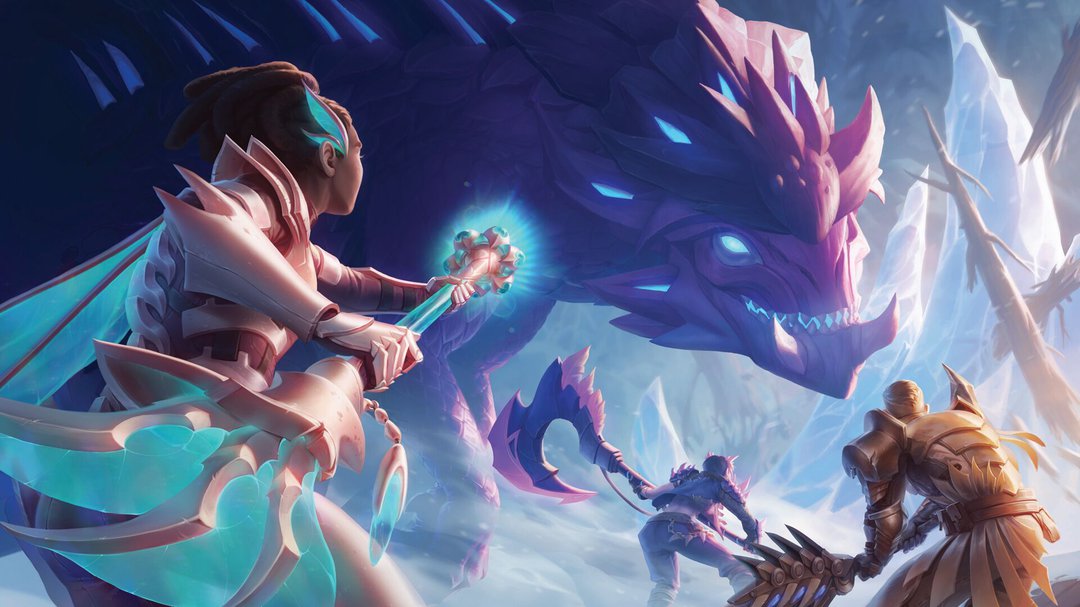 Nothing like growing closer as friends while facing off against something ten times your size.

While Dauntless is fun playing with random strangers online, it becomes a real treat as you experience the hunt with friends. Even better for our goals, Dauntless is now cross compatible on consoles and PC, giving us plenty of ways of joining up as a group. With no cost to trying it out, why don’t you pick up a weapon with us and become a slayer? Check out our review if you want to know more before installing.

Another free to play entry, and one that has been out for a long while. I haven’t played it myself, but Eric and Adam having been playing it for a while. To put it in Adam’s own words: It’s a magical space ninja power trip. A game where you can flow from parkour to gun and swordplay fluidly. Plus, its free to play. There's lots of frames to fit all playstyles, and it fills that feeling of sleek futurism very well. 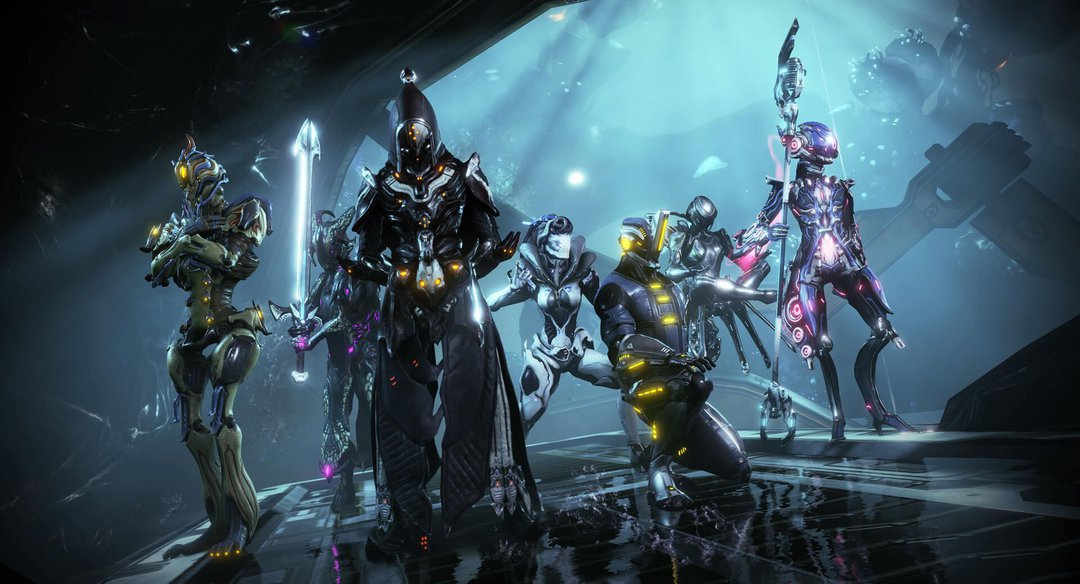 Unfortunately, Warframe is not cross compatible from PC to platforms, so we’ve been playing specifically on the Nintendo Switch. It has a dedicated group of fans in our discord, so if you’ve been curious about trying it out, now might be the time!

This game is a bit of a strange one. It’s a mix of open world exploration and tower defense; it takes the idea of Minecraft-like crafting while also trying to give you the joy of exploring an MMORPG zone for the first time. In fact, that’s one of the best ways of describing Eden Rising – a small MMO world where you have your own private server to run around in. I tried my best to describe the game before, and found myself just rambling about how much I loved its ambitious ideas instead. 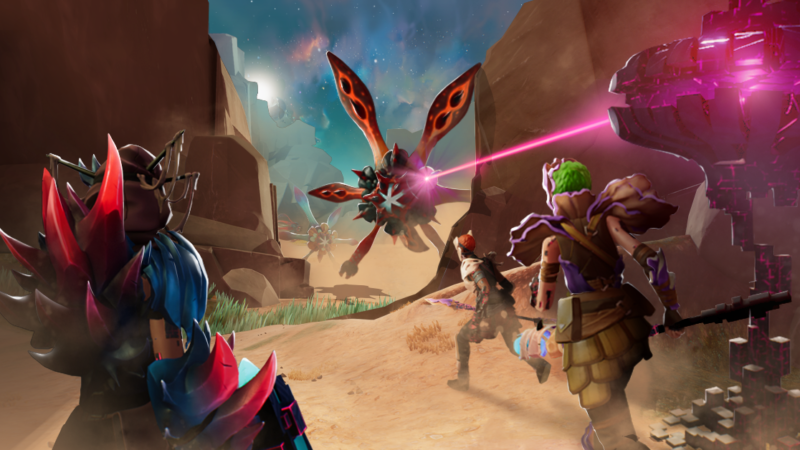 The fun in Eden Rising is in exploring the strange zones, finding secrets, and upgrading your whole team's supply of eccentric weaponry.

This is a fun game to explore, but it really sings with a group. Don’t worry about price point either: its free to play if you just want to try it! There’s no micro-transactions either. It’s more like an extended demo of the first zone. However, if the main player (who hosts the server) has bought the game, you have access to everything. I own the game and love its weirdness and janky game design. At some point this year, I really want to see the plot through to the end. Who’s with me?!

This game is madness. That’s really the only way to put it. The fact that Streets of Rogue is published by TinyBuild should be your first clue, and your second should be the screenshot below. 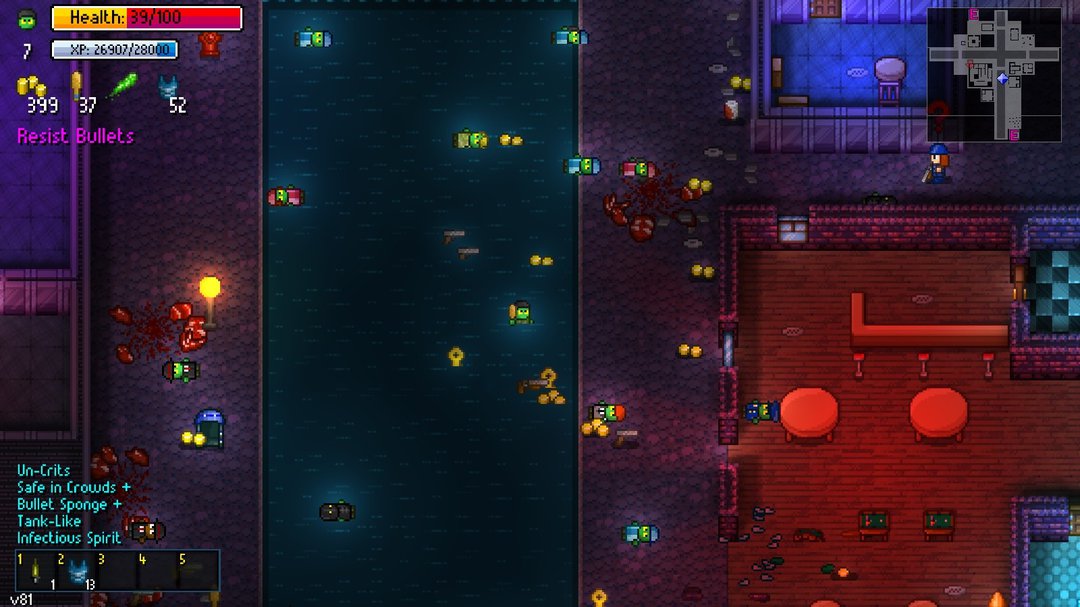 Yes, I'm playing as a zombie. And yes, I totally caused an outbreak in order to try and... save the city?

This is a game where you are arguably part of a resistance that’s trying to end the corrupt leader of your city. Of course, you can play everything from a pacifist doctor to a gun-toting criminal to a….gorilla? Zombie? Stand up Comedian? Playing through the levels in this game is an exercise in trying to control chaos. We had so much fun reviewing it we want excuses to play it again.

You are given objectives for extra points to upgrade your character as you try and make it to the bottom floor. Playing solo feels like it’s a puzzle where the pieces maddeningly keep mixing themselves up in a large bowl… playing with friends usually just descends into your group breaking down every door (and wall) in order to find the key to keep going. While this game isn’t free, at only $20 we thought it was safe to include in this list as a possibility.

Speaking of chaos, in Vermintide 2 you get to fight it head on! Dropping you in the grimdark universe of Warhammer, you are one of the last staunch defenders of the Old World, having formed up as a ragtag team from various races or creeds to try and stem the flow of evil. With conniving rat-men assassins, daunting lumbering knights, and wicked pestilence sorcerers always trying to overrun you while you fulfill missions, you will have your hands full. 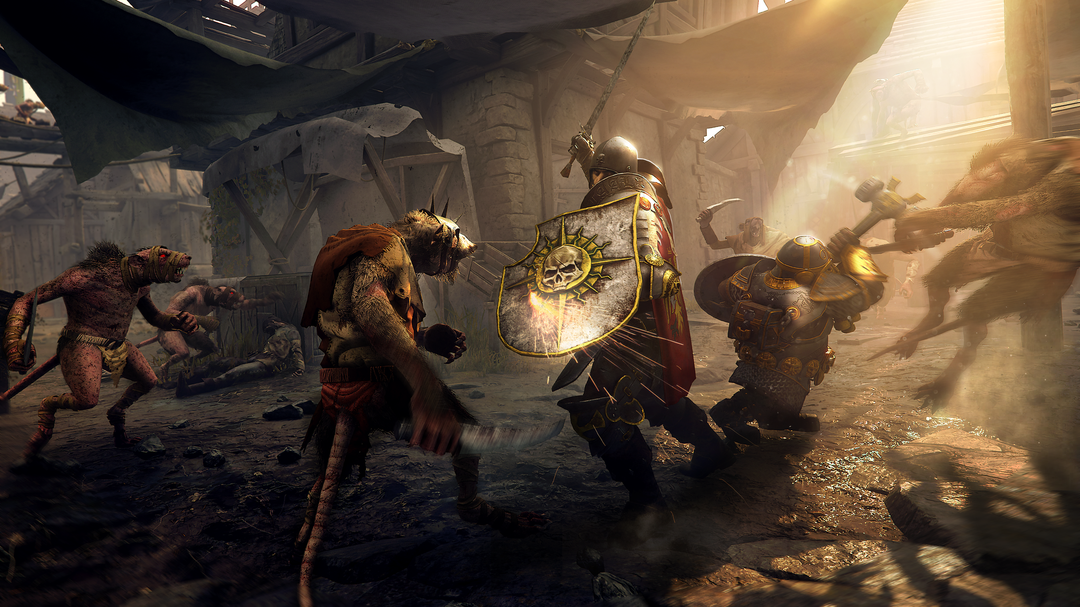 For those who haven’t already tried this game out, it’s essentially medieval Left 4 Dead. It’s a combination I didn’t think would work well… and then suddenly it was 1 am, and I was hoarse from shouting at my friends online about where the next wave of enemies was coming from. This game is our most expensive on this list at $30, but the sheer amount of fun you’ll have co-operating with three other heroes is worth it.

This game is a little out of our comfort zone. To my knowledge, none of us at Sprites and Dice have a lot of experience in battle royale games, but we weren’t sure where to really begin without feeling sucked into hours of trying to learn how to craft, build, and sneak while getting mercilessly sniped down for our efforts. Fortunately, this is where The Darwin Project comes in: with 10 player games that are focused more on melee combat, games are faster and more intense. 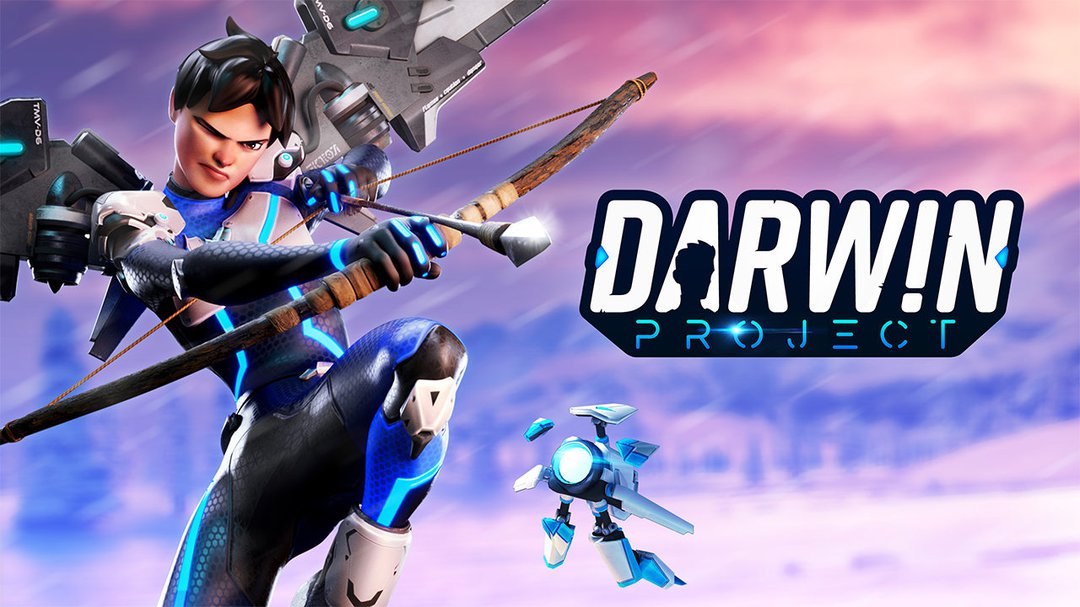 It also benefits from being hilarious. The Darwin Project takes a lot of its theme from The Hunger Games while adding more slapstick and more futurism. Your experience points are fans, for example, and the announcer in the lobby cheerfully reminds you about issues with your health plan. In terms of gameplay differences, The Darwin Project innovates by adding an 11th player as the Director – someone who can zip around the map and cause havoc by closing zones early, giving supplies to specific players, or even… nuking areas?

The Darwin Project just came out on Steam this last month, and so we’re giving it a few tries. The ability to have different classes is fun, and we think playing custom games with a full group could be some of the most fun you can have on a Monday night.

Come Play With Us!

There you have it – six games to choose from, each boasting some fun multiplayer in different ways. This isn’t a list set in stone, mind you: In the future, we’re planning to alternate options as more games come out and by request. Every few months, we’ll be changing up the list to make sure it stays fresh for everyone involved.

We’re really excited to be trying to spread our message of community and fun further than we have before. By hosting this digital game night, we’re hoping to give you – and ourselves – a place to relax after a long day at work. We hope you’ll join us, every Monday at 7:30pm EST.

Life is short after all; let’s go have some fun gaming.