A First Look at Pyre

Having Fun In Exile 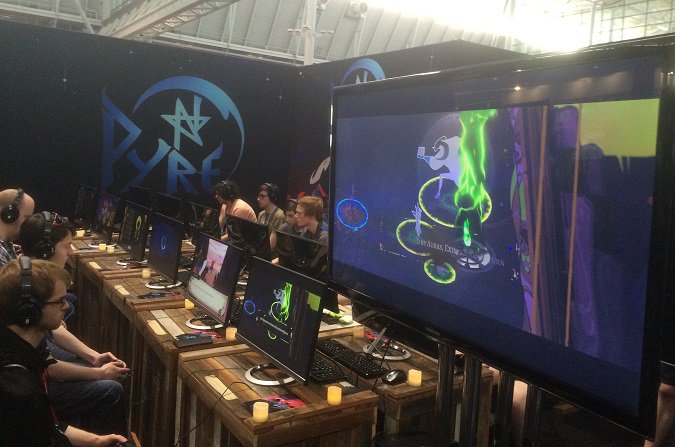 Pyre is different…very different. The familiar action-RPG set up that was in Bastion and Transistor has been stripped away to let you try out a new sort of gameplay. The world is one which isn’t falling apart or being destroyed, for another small difference. Here, outside of the “Rites” which function like combat, you are treated to artwork depicting lush, if bizarre landscapes, hinting at a whole new world filled with its own logic and ecosystem.

Yet… Pyre is, without a shadow of a doubt, a product of Supergiant Games. You can tell simply from the rich hand-drawn style of the characters, but you can also tell by the tone the game sets. The world isn’t ending in this one, but the characters that you play as feel as though they have lost it all.

They are exiles, thrown out into the wastes. So are you, truth be told, but at least you have the ability to read.

I was immediately hooked when they threw this plot point at me. The story is secretive, but draws you in.

That’s right, you read that correctly. The masked exiles in your party refer to you as a Reader. You find out that apparently, it was illegal to read back from were you all originally came from. It was apparently illegal to do a lot of things, but regardless, as soon as these exiles find out you can Read, they give you a magic tome, one that you can glean knowledge from…knowledge of the rites, of the way out.

Eric and I got to play Pyre for about thirty minutes at PAX East, and it was a beautiful mystery. It throws you into a world filled with its own lore and history, letting you pick up clues along the way through dialogue and your slow reading of the tome. What we really know is what I’ve already told you: the exile is something that your protagonists want to end, for many different reasons that they keep to themselves at the start of the game here. The way out is through the Reading of the Rites.

Except, the Rites are a little more exciting than you would originally think them to be.

Take a sports game like basketball and make it three-on-three; you have to put the ball in the opponent’s net. Except, this isn’t a sport. Like Greg said during our interview, the characters in this world wouldn’t ever dare say something as sacred and as meaningful as the Rites is just a game. They wouldn’t be able to comprehend it. The air of mysticism elevates this base idea of gameplay to have some real gravitas: the ‘net’ is instead a pyre of power. Your characters aren’t knocked down by people getting too close to each other, but are instead banished out of space and time for a few moments, thanks to the power of the magical exile placed on them. 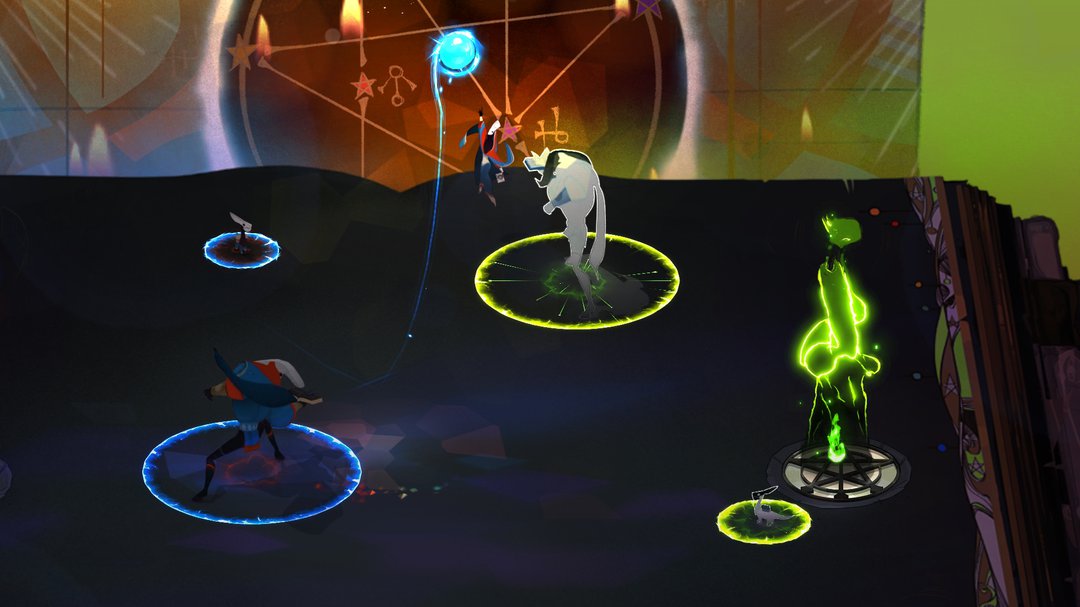 You will come to love every character on your team for different reasons. Your large, slow giant is a menace to the whole field, while the fast, nimble talking-beast you have lets you race the ball up the field.

It is frenetic and fun; whoever gets the orb loses their magical protection, and has to get around the auras of your opponents to get to the pyre. Only one character on a team can move at a time, but it actually adds to the intensity of the game: do you take your amazing horned giant and put them in the middle of the map to buy your speedy small character time? Or do you guard your pyre, switching rapidly through your characters to advance them up a field as a full group to make a more menacing front?

To be honest, Eric and I couldn’t believe how well balanced and polished Pyre already felt. Scoring a ‘goal’ was immensely satisfying, as voices from beyond the material plane taunt or praise you. Scoring makes your team shrink from three to two temporarily, making it harder for a winning streak to carry you through the game. You have to use all three characters in tandem, giving it a feel of teamwork and companionship that makes this game feel wildly different from the other games by Supergiant, where they purposefully tried to make you feel alone.

Of course, we couldn’t see everything. We started to immerse ourselves in a new world that seemed deep with lore, and between these Rites, you have another game to play: moving your wagon from place to place on the map, gathering resources and spending time to manage your other characters. Spending time talking with them can help improve their relations, as well as their ‘enlightenment’. You can level people this way, something we only got a hint of, and it will be interesting to see how that part plays out in the full game. 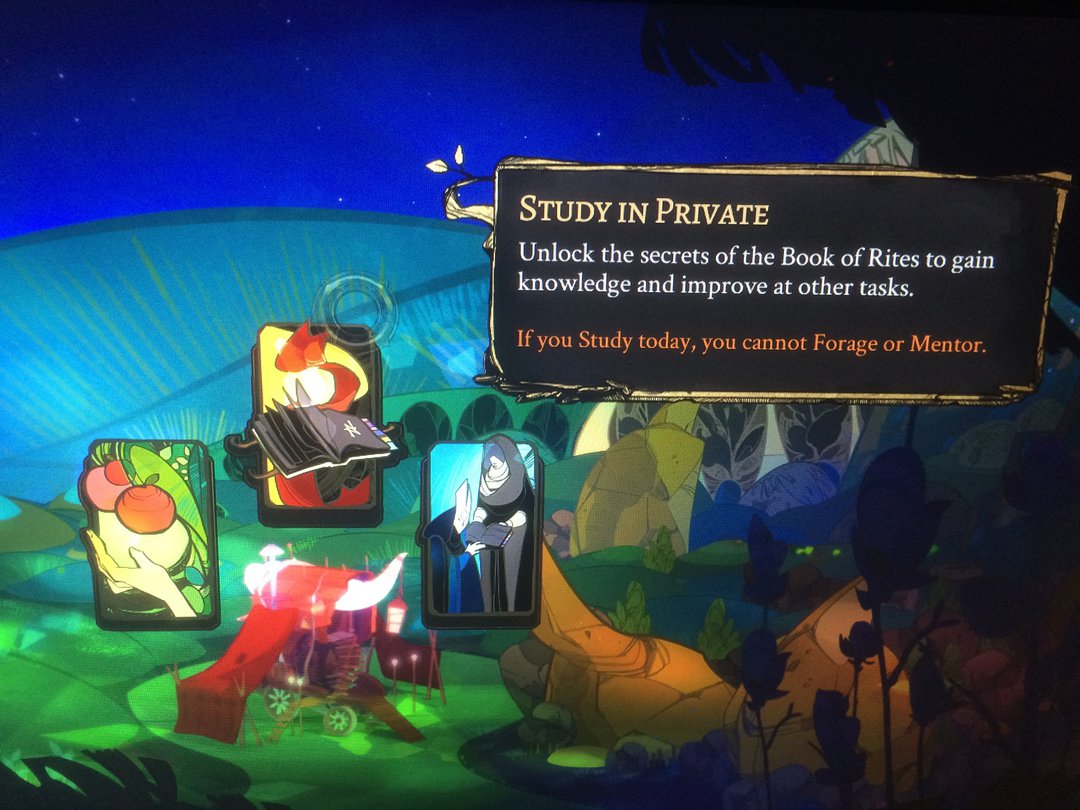 The demo for Pyre didn’t just feel good, it felt great. It was polished and beautiful, with well mixed in music and, as usual, the voice acting in a game by Supergiant is absolutely top notch. Logan Cunningham, Darren Korb and the usual crew of talent is back, band showing off their talent for infusing a game with feeling just with audio cues and well delivered lines. 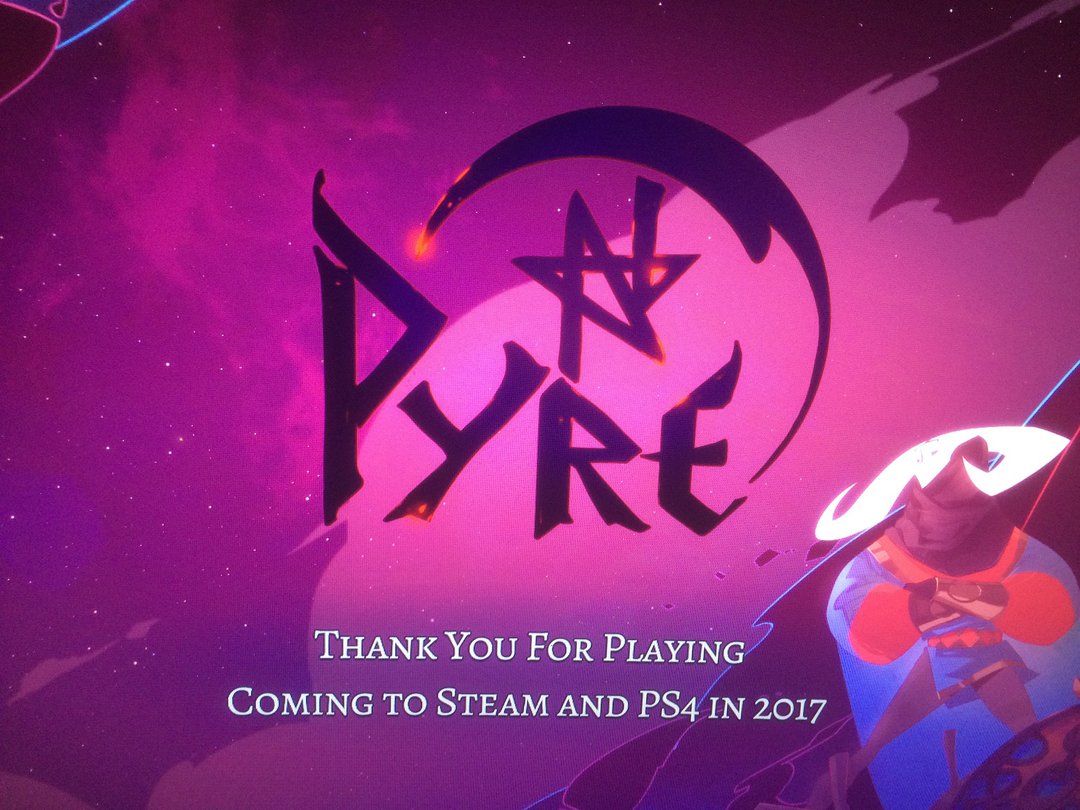 I’ll say it, I’m hyped. I’m going to have to wait nearly a year at the very least to play this game, but now that I’ve had a chance to play this demo, that’s time I’ll happily give them. As of writing this, there are two more days of PAX East 2016 left. If you are here, and haven't checked out their booth, it is more than worth the line to see what they have in store.