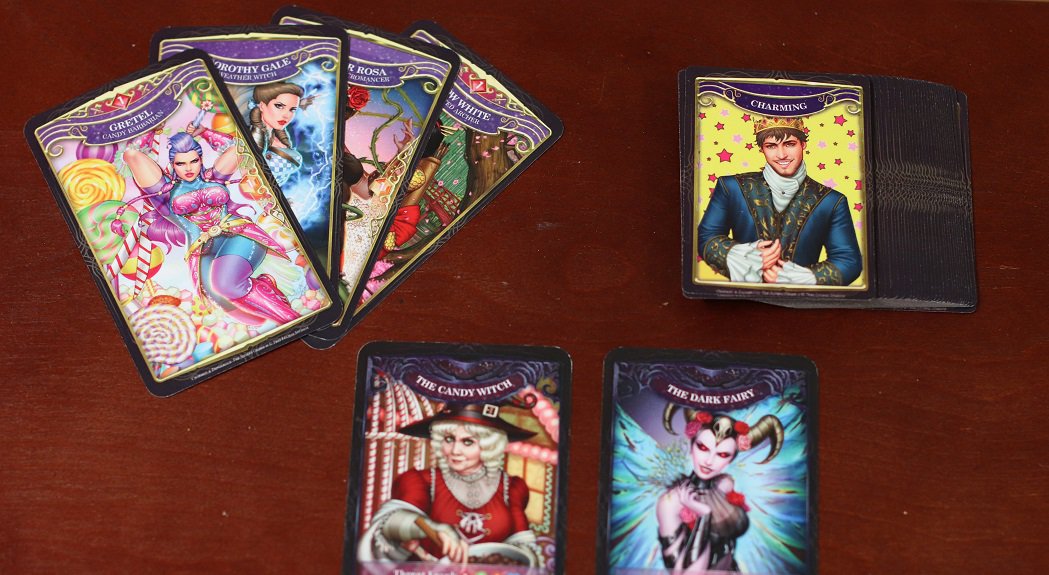 Tell me if you’ve heard this one before: Gretel, Dorothy, and Snow White walk up to a wicked house made up of gingerbread. Unslinging her bow, Snow White fired an arrow at the Corpse dragon as Gretel charged forward, sharp blades of candy ready. Dorothy prepared a gust of storm magic as the old witch inside laughed manically, preparing curses to throw at the heroines as they began their assault.

A Modern Twist To Tall Tales

Charmed And Dangerous is a co-operative card game by Th3rd World Studios that’s currently on Kickstarter. While Kickstarters that use mythology or well known worlds are common, this one stands out for a few reasons. The first is the price – only $20 dollars for a full game – and the second is where they decided to go with the art direction and theme. Here, you are the princesses from various folk tales, working together to assault a villain. Gretel is not a small innocent child however, but a hulking barbarian ready to slay any monster. Briar Rosa looks ready for a Day of the Dead festival and plays with curses. 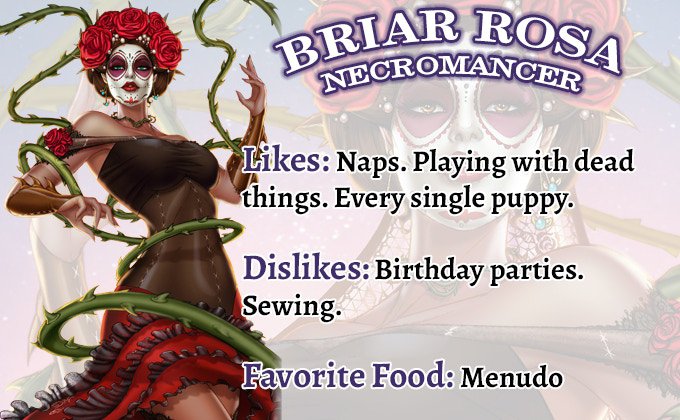 I for one am totally here for being a badass necromancer princesses.

A round begins when players choose one of the princesses to be, and then a villain to fight against. You also get to choose a lair, which will thematically change some of the rules of the game. Monsters and dark magic are waiting facedown to be explored every turn. It’s a small game box, and with only cards it manages to portray quite a bit quickly. While some might be put off by how some characters like Cinderella or Gretel have been re-imagined, it gives the game a striking look on the table.

An Adventure That Rushes Along

Charmed And Dangerous is a game that doesn’t spare any time getting to the point: defeat the villain, while having none of your princesses fall. It also avoids deck-building, having all the princesses pull from the same pile of cards. Your hand is actually your life total, meaning its an easy way to keep score.

Combat is managed by choosing a Foe from the table and turning it over. Each monster has a certain threat level that must be reached in order to be defeated, chosen from the four different facets in the game: Fierce, Harmony, Majesty, and Charm. Each princess has a trait or two they start the game with to get an advantage, and hopefully the challenges they flip match those traits. While they can always call for help, defeating the monster on their own will let them slot the foe under their card to add more power to one of their facets, increasing their power. Losing makes you discard, bringing you ever closer towards doom. 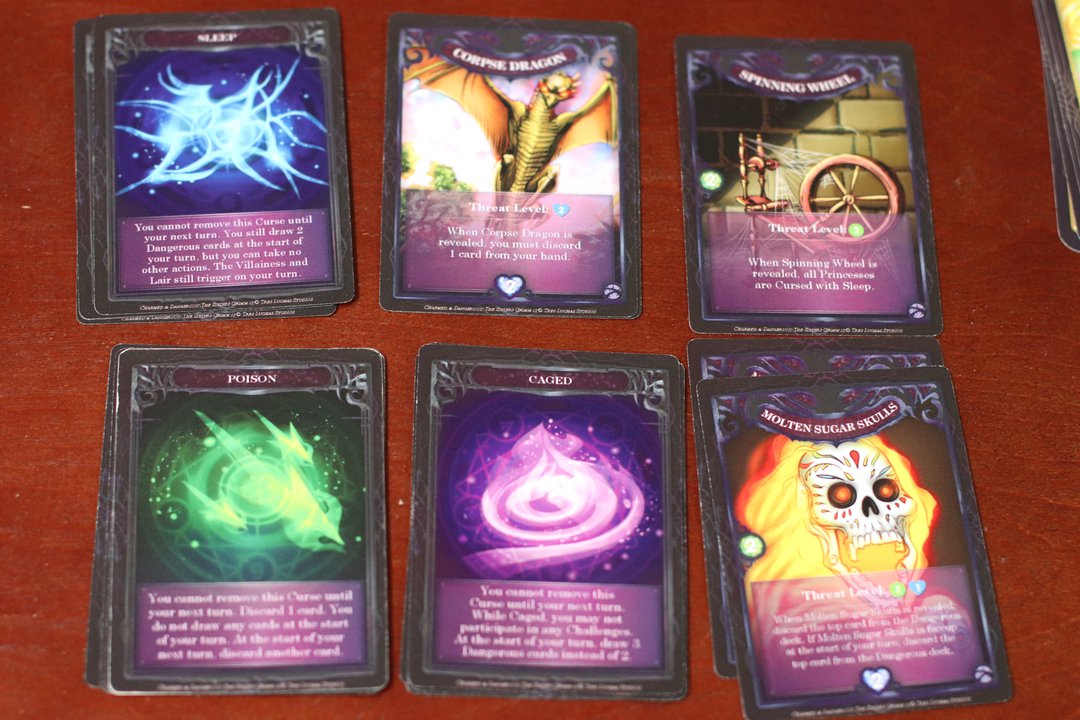 Some of the various curses and monsters you'll have to face. There's a great variety between different status effects you'll have to deal with, and what facets you'll use to get to the final boss.

The game moves along very quickly, with the grid of foes always replenishing between rounds. In fact, if you don’t manage to remove enough foes constantly, the replenish step makes all princesses discard cards instead, making you have to always explore and rush along to the next fight. To win you must fight the villain, something that’s accomplished by fulfilling a specific goal for that particular boss – maybe its having enough Fierce, or just having a character with an overfull hand of cards stocked up. Either way, you want to get there quickly, working towards that final fight before your collective deck runs out of cards.

Fun Art And A Low Price Point For A Charming Game

Charmed And Dangerous gets to its point quickly without much extra fanfare, and that’s actually a good thing. While I love co-operative games, many of them are built to be brainburners that take up a ton of your attention and require a lot of intense discussion (I’m looking at you, Spirit Island). This is a game that’s meant to be played in less than an hour – one of my trial runs had it only took thirty minutes. I enjoyed the game at that pace - it gets where it wants to go quickly, letting you enjoy the battles without getting bogged down.

Another huge point for Charmed And Dangerous is its cost: only twenty dollars to get in on the ground floor during the Kickstarter. Even if the price went up at a later date, there’s a good amount of game you are getting. Between the well done art of the princesses, the villains, and the simple but solid game mechanics, it’s a great little package that would be a fantastic way to start or end a game night. 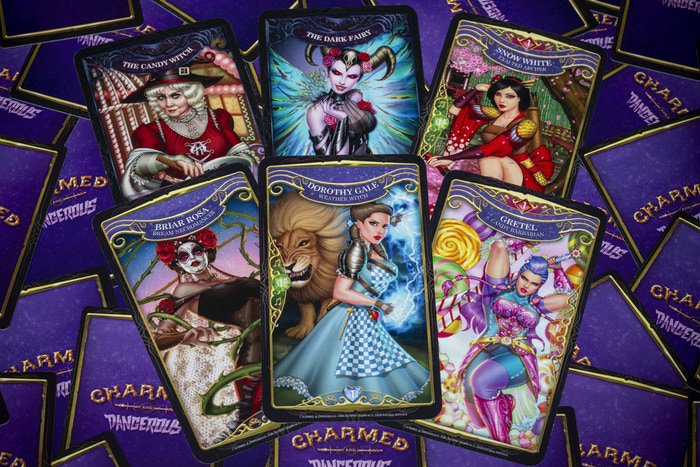 For myself, I think I was sold when I found out about the “Prince Charming” mechanic – how in the deck are multiple cards that just have a dashing prince on them. Many princesses use them as wild cards, as a deus-ex-machina for their special attacks… or of course, they can be used as a get out of jail free card to run away from a fight, since they are so distracting.

Quirky, direct, and a little turned on its head – a good microcosm of what’s good about this game. Check it out for yourself, while there is still time!