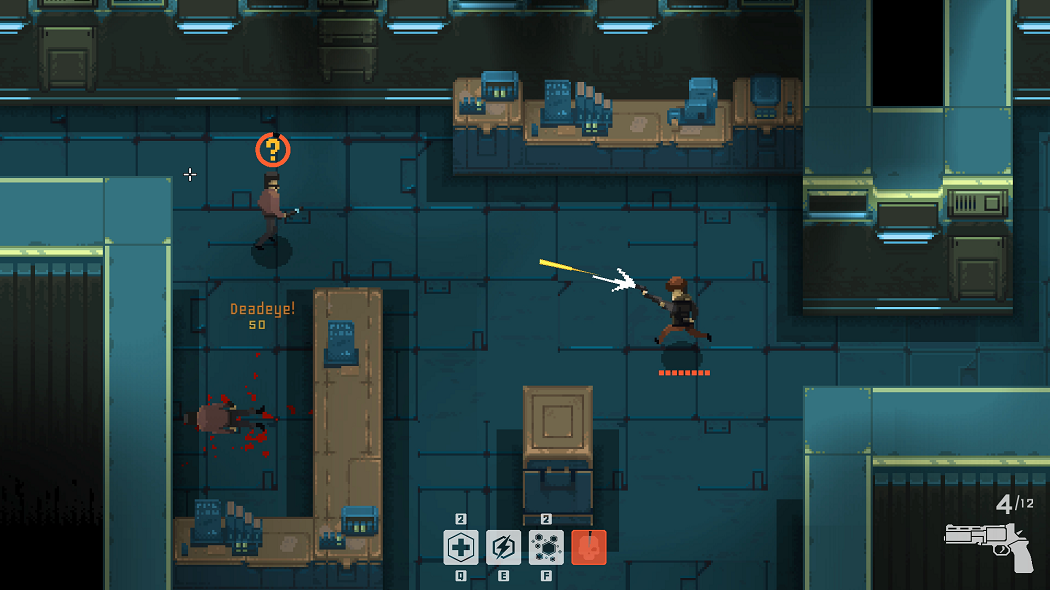 This past Play NYC was host to tons of unique and interesting titles coming out from small devs. My focus this year was on the stand-out RPGs that were shown; while there weren't many games in that genre around, what was there blew my mind. In fact, a couple of the RPGs I tried ended up becoming my favorite games of the show. I'm going to be talking about Totem from Other Moon Games and Disjunction from Ape Tribe Games; these are projects you'll want to be keeping your eye on as full release dates arrive.

Totem: Feeding Your Wild Side

In an enchanted forest of towering blue trees and crumbling ruins of times long past, a girl sporting antlers rises from the earth. She’s the main character of Totem, a game about protecting this magical forest and its inhabitants from a growing evil army of blacksmiths called The Anvil. The game’s messaging is rooted in the modern era, where we are aware of the threat against nature that rampant and unchecked industrialization can cause. So how does our horned protagonist fight back against this advancing threat in her own mythical world? With an enchanted axe and the druidic powers of transformation of course!

In my nearly 15 minute demo of the game, I was introduced to the forest and guided by a nosey little sprite, maybe a distant cousin of Navi. This faerie guided me to the main weapon you’ll be thwacking foes with, an enchanted axe. If you’ve played the latest God of War, you know how good enchanted axes can be, and this one behaves mostly the same way. By chopping down mana-infused plants in the forest (don’t worry, they grow back) you can call your axe back to you after chucking it at an enemy, dealing damage on the way back. Of course you can also swing it normally, but with the other ways you can attack, you might not be doing that all too much.

As your horned character traverses through the forest, she’ll also face trials from the ancient creatures that have called the place home for ages. The demo only featured one of these animals, a wolf by the name of Artemis. This is where the difficulty of combat really set in. Narrowly dodging a beam caused me to catch my breath, finding an opening for an attack was like a small victory. It was that combination of feelings that few games nail - tension and vulnerability. Artemis attacked with black lasers that shot from its mouth and the sky above. They had me on the run, dodging out of the way until I could find an opening. After beating the beast, it granted my horned character a new power. I could make a pair of flowers spring out from her shoulder blades which fired beams like the ones Artemis had used. They drained mana quickly, but did enough damage to leave the enemies that had been giving me trouble in the dust. 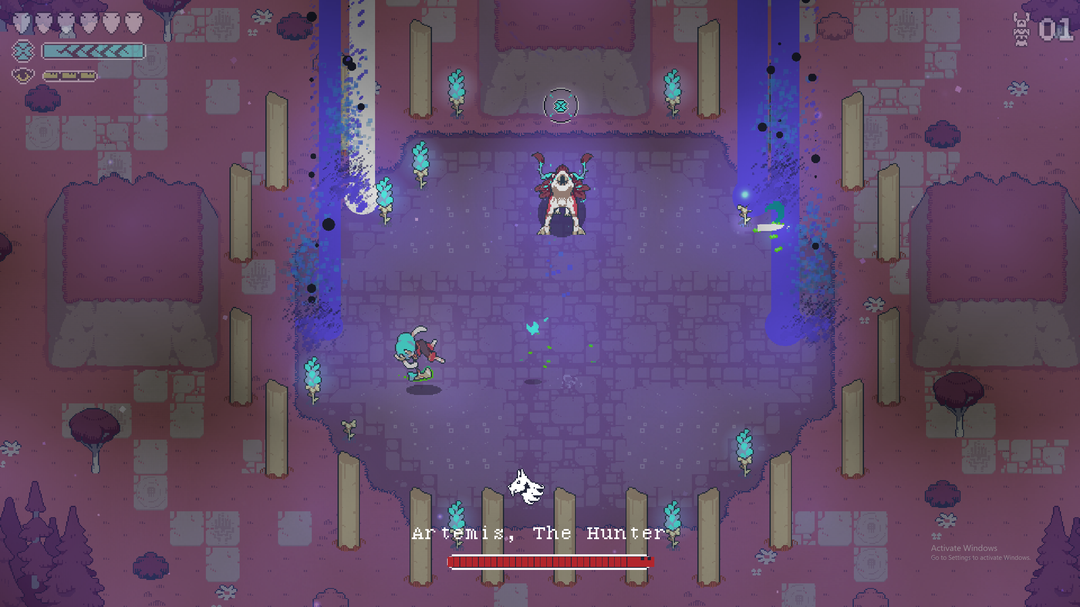 The fight against Artemis nailed everything great about boss fights.

The demo ended shortly after. When I took off my headphones and turned around, Lead Developer & Designer of Totem , Matt Lawford, asked me what I thought. I can’t say what I responded with since we’re a clean site, but know it was glowing. Totem is a fantastically polished game with a clearly thought-out idea of where it’s going. Its action is enough to elicit those feelings of anxiety and excitement, a perfect blend of challenge. Somehow I haven’t yet mentioned the game’s art style, which keeps the crisp and clean motif going. With a 2020 release date slated, you know I’m going to be keeping track of Totem.

Disjunction lies on the other side of the genre spectrum when compared to Totem. This title brings players far away from enchanted forests with their sprites and mystical animals to the industrialized, paved over cities of cyberpunk dystopia.

According to Programmer Erwan LeCon, Disjunction takes inspiration from the original Metal Gear Solid titles, as well as some classic cyberpunk titles like Deus Ex . When it comes down to it, you’ll find everything you expect in a cyberpunk title in Disjunction . “So we basically took all of our favorite parts from all of our favorite cyberpunk stories,” said Erwan. But what does a cross between Metal Gear and a development team’s favorite parts of a high-tech dystopian genre look like? As it turns out, pretty cool. 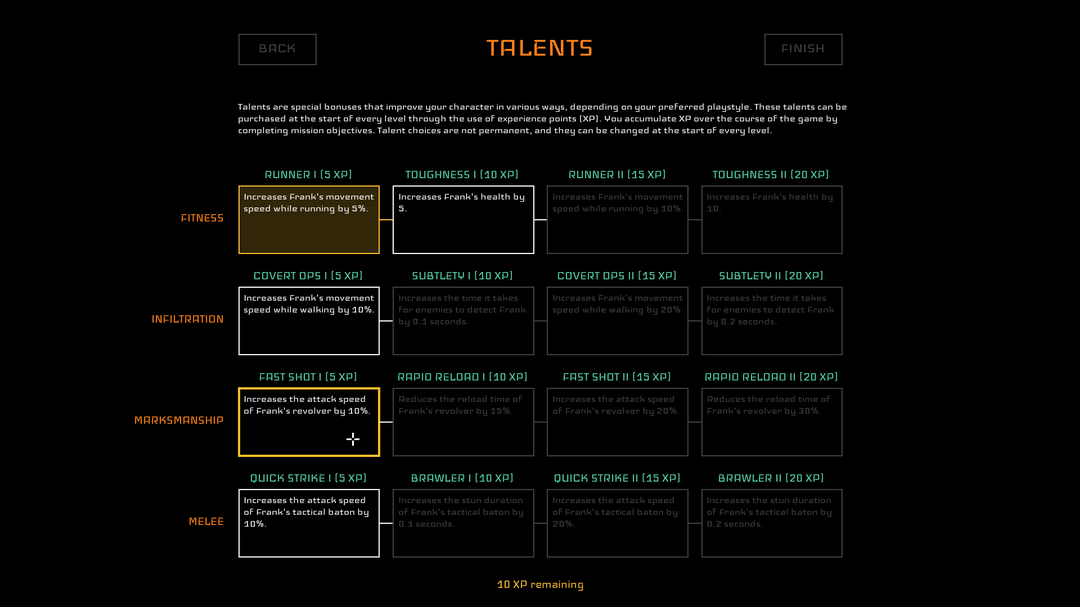 Different talents let you build toward your particular playstyle.

In Disjunction you control three distinct characters, Joe, Frank and another that only goes by the nickname of Spider. This trio each have their own playstyle, including their own abilities that can be upgraded one of two ways. On top of that, each character also has their own talents that are bought with xp. When I asked him what his favorite out of the bunch was, Erwan had to go with “Bullet time. It’s always fun.”

Our demo of the game started in Frank’s apartment, a little cube to call his own above the clouds. A new job had just come in from a mysterious client, she needed a datapad from the Russian mobster that had burnt out Franks eyes a few years back. Since then he’d gotten a new cybernetic pair, and probably cultivated a grudge while he was at it. This opening conversation was full of choices that the game was promised to have. Sure they were between being agreeable or a jerk, but they built a foundation for decisions you could make in the future. 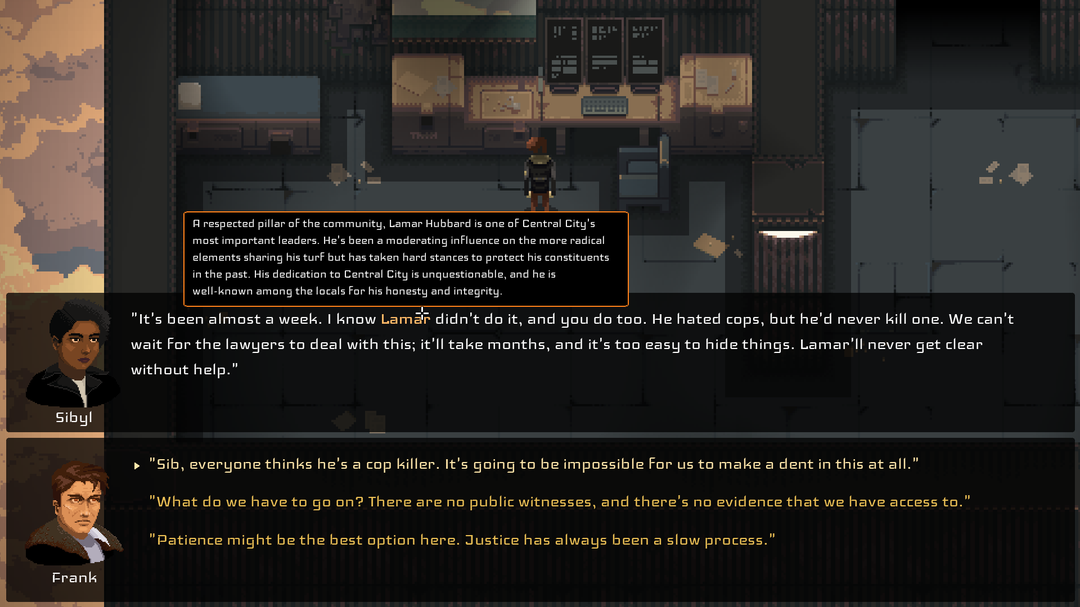 Mid-conversation context is super welcome; its a lesson AAA developers could learn from.

If you’re a lore freak like me, Disjunction makes it easy to read up on anything mentioned by an npc. Any text highlighted in orange can be hovered over, giving you a quick rundown of who or what was being talked about. It’s a small detail, but one that any of my background info obsessed brethren will immediately enjoy. It's small touches like this which make the game stand out from the pack.

Launching into the mission, during which we’re told by our employer to not kill anyone, Frank starts with his revolver out. Before you get the wrong idea, I started by sneaking around. You can knock enemies out with non-lethal damage, in this case with a nightstick. Staying in the shadows and walking gives you the added bonus of not only seeing enemies cones of vision, but also shrinking them. A couple of hefty thwacks with the club and any baddy is out cold.

Everything was going smoothly… until I was spotted. Eventually, enemies ended up watching each other, and even with the skills I had; a projectile that stunned baddies and a smoke grenade perfect for distracting crowds, I was spotted. Six shots later and I found myself standing in a pool of Russian mobster blood. That wasn’t good news for my boss, who said that she could get found out because of the mess I made. But with a few dialogue choices our last conversation went something like “not my problem, now pay me double.” I was out of there and the demo was over.

Although I didn’t get a chance to see the other two characters, I expect they’ll be just as exciting as Frank was. Even so, the prospect of another new cyberpunk title where choices and actions make a meaningful difference is exciting enough for me. Disjunction may be arriving in 2020 but I wish it’d get here sooner.