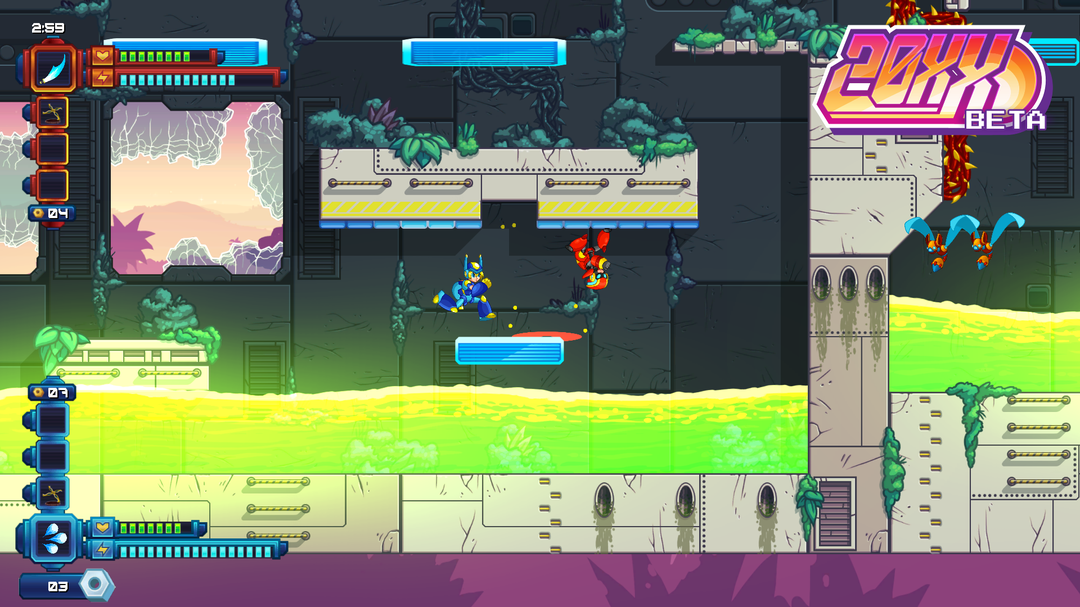 At PAX East 2015 I first discovered 20XX, which is a cooperative action-platformer roguelite and a loving tribute to Mega Man X . I enjoyed what was there, but wanted to see where it was going to go next. At PAX East 2016, I was able to talk to Chris King, one of the developers, about the game’s development and what we have to look forward to. This is what he had to say.

20XX has come a long way since last year in terms of graphics and tweaking the mechanics. Are there any more major updates in the works, or is it now just a matter of polishing it?

Chris: There are still some big things in the works. We’re working on level 9 [the final level] and getting that added in, along with a lot of narrative stuff.

Maybe someday I’ll get that far. I always die on the Sky Temple.

Chris: *Laughing* Get Sky Temple out of the way early. Any jump boosters are a big help for that, too. 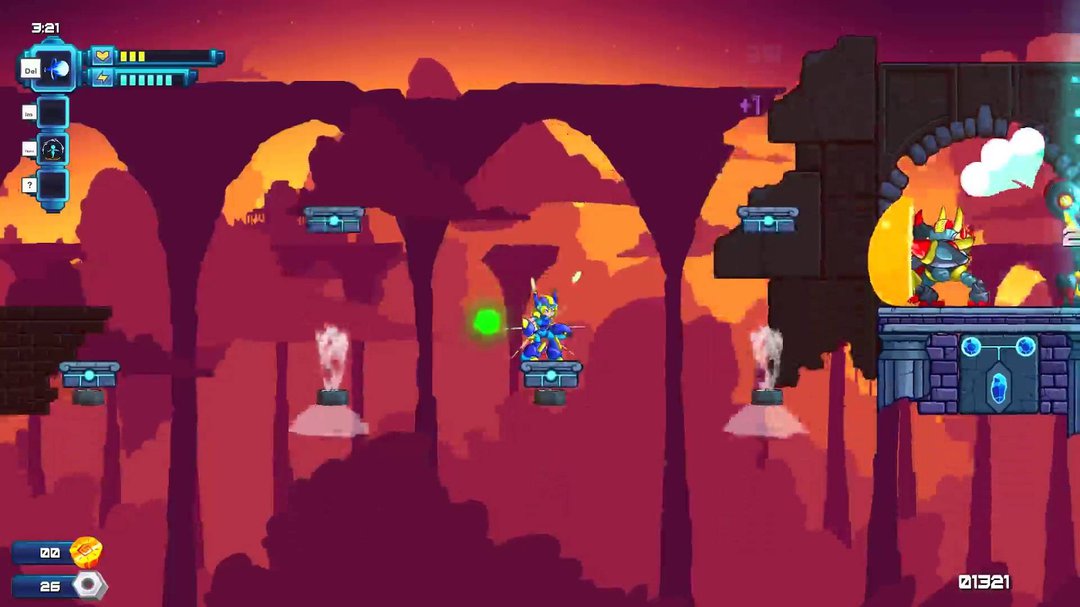 Do you have a release date in mind for 20XX?

Chris: No. We ran into that trap before, where we announced a particular date and realized that we wouldn’t make in time, or the update wouldn’t have the kind of quality we wanted. We plan to take our time and not release anything until we’re confident in it.

What challenges did you run into while trying to turn a single-player platformer into a co-op roguelite?

Chris: Surprisingly, not many. The genre lends itself to cooperative play and roguelike elements really well. The hardest part was the actual coding, not making the concept work.

Did you run into any legal issues with Capcom and the Mega Man X series?

No. We haven’t heard anything from Capcom, and given that we’ve been at the same conventions for a couple of years now, it’s unlikely that they haven’t heard about what we’re doing. We don’t expect any problems. 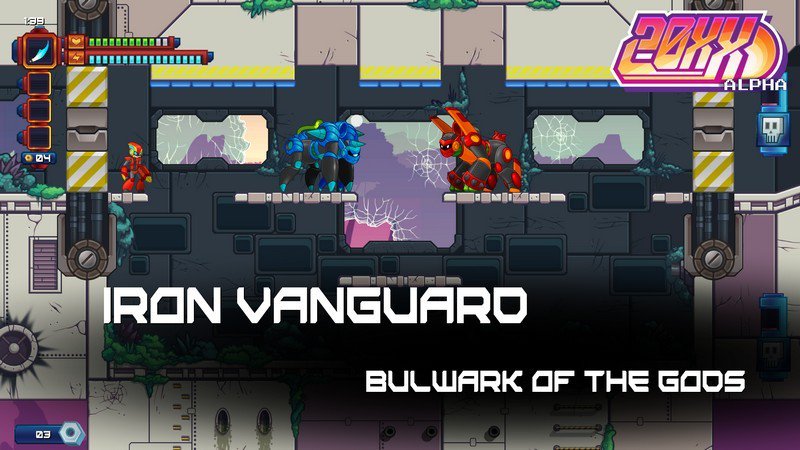 Let’s get back to the game itself. Overpowered item combinations are part of the fun of roguelites, but have you found any that really break the game.

Chris: A couple. In particular, I remember when we first introduced the double-jump item. The problem was that it would stack, and you’d have players doing eight jumps at a time and basically flying through entire levels. We were able to fix that, and a few other issues, by turning them into a special kind of powerup that you have to put into a slot in your armor. Each slot can only hold one item. In that way, we fixed some game-breaking powerups in a way that echoed Mega Man X’s armor upgrades.

Adding speed and jump enhancers to a platformer would seem to have potential for game-breaking as well.

Chris: That’s true. We have had players go through levels in ways that we didn’t intend, but that’s just part of the fun. The double-jump item was a special case, since it basically allowed them to skip the whole thing. 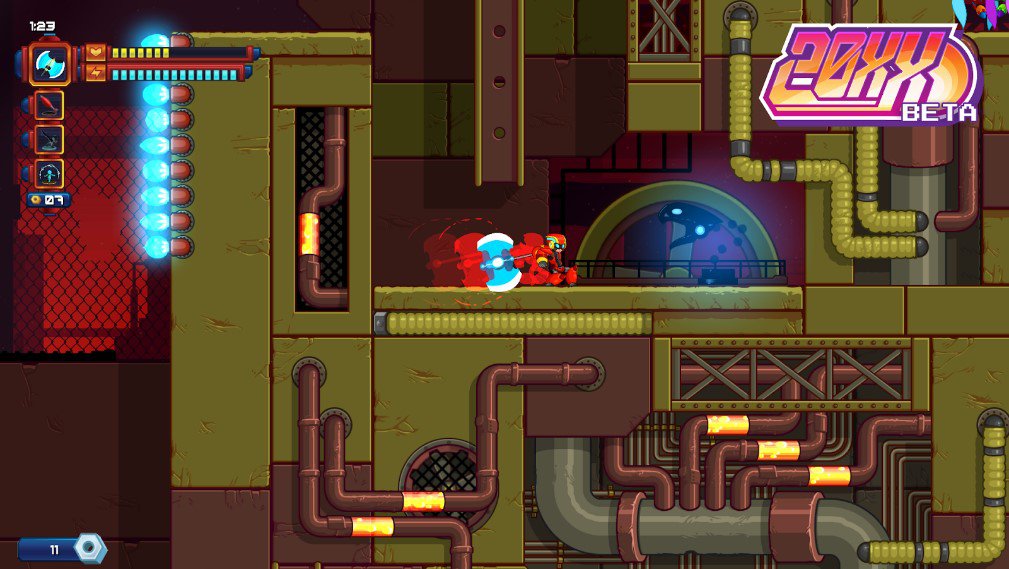 Ace's axe pickup is slow, but stronger than his basic sword

The challenges. We have daily and weekly challenges that let players compete against each other in a premade series of levels. This is a bit more like classic Mega Man, where you could memorize and perfect the levels.

Is there anything else you'd like to tell our readers?

Chris: Just that we’re getting closer to version 1.0. It’s a very exciting time.

20XX has certainly come a long way since last year, and it’s got a ways yet to go. I believe the highest praise I can offer it is this: 20XX does exactly what it sets out to do. It provides a challenging, high-speed platforming experience that feels like it could be another entry in the Mega Man X series, with its own twist on the classic formula. Early access or not, I definitely recommend picking up this one.