The RPG On PC We've Been Waiting For? 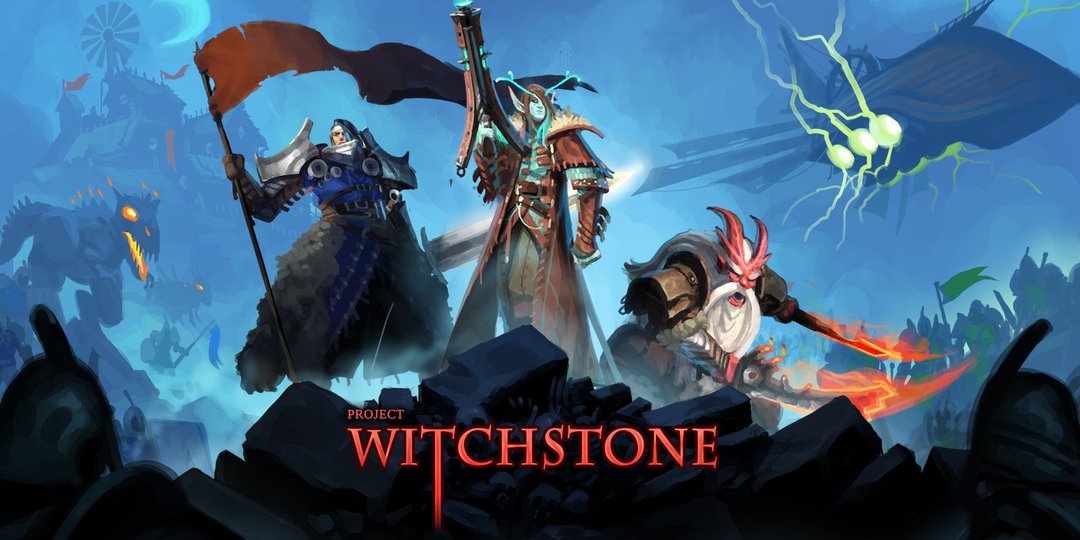 Stop me if you’ve heard this one before: A single-player video game trying to capture the essence of a tabletop RPG by offering an open world, a variety of different ways to play, and a wide array of NPCs with their own lives and jobs.

Ever since the original Final Fantasy set out to be D&D: The Video Game, developers have been trying to really encapsulate the feeling of sitting at a table to play your own character or party in a living world. We’ve gotten some great games out of the attempts, but they’ve never quite hit that sweet spot. The reason is both simple and obvious: No matter how much code the programmers put in, or how cleverly they design the world and the NPCs, a video game can only ever do what it’s programmed to do. A tabletop RPG, on the other hand, is limited only by the imagination of its players.

Project Witchstone by Spearhead Games is the latest incarnation of this dream, with one major difference: The AI might finally be advanced enough to make it work. 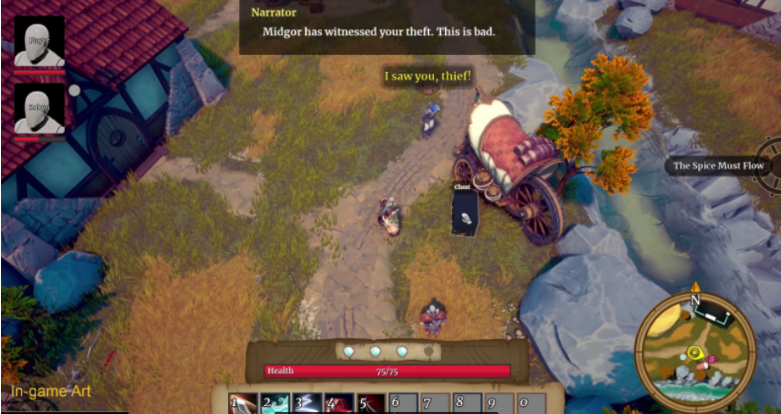 You've even got a narrator to tell your story!

At PAX East this year, I had a chance to get my hands on the game. It's certainly early in development, but what I saw was more than just promising.

Perhaps one of the most interesting things about Witchstone is that there is no overarching story, no main quest, and no Big Bad for you to defeat. The story of the world is just people, including you, living their lives. This alone is a huge departure from other RPGs, and really from most games in general. You could become the leader of a faction and wipe out your opponents, you could become a fabulously wealthy treasure hunter, or you could just settle down and live a simple domestic life. With no scripted plot driving your actions, it’s really up to you to decide when you’ve “beaten” the game. Spearhead hopes to build a world where life is what you make of it, no more and no less.

I was understandably skeptical when I first heard about it, but once I sat down with one of the devs to play a through a demo, I was actually quite impressed. As this is a storytelling game, let me tell you the story of our short time playing together.

Our nameless Ranger arrived in town and immediately saw that things were not well here. An innocent—we assumed—townsperson was being bullied and harassed by a group of armed guards. This could not be allowed!

We stepped in to try to convince the guards that their behavior was unacceptable. At first we tried diplomacy, which was decidedly not our strong suit. A bad toss of the dice ensured that didn’t work. Knowing that bullies are often cowards at heart, we decided to try intimidating them instead. They did not take kindly to that, and turned their attentions to us instead. This did allow the poor townsperson to escape, so mission accomplished in that regard, but now we had to fight. 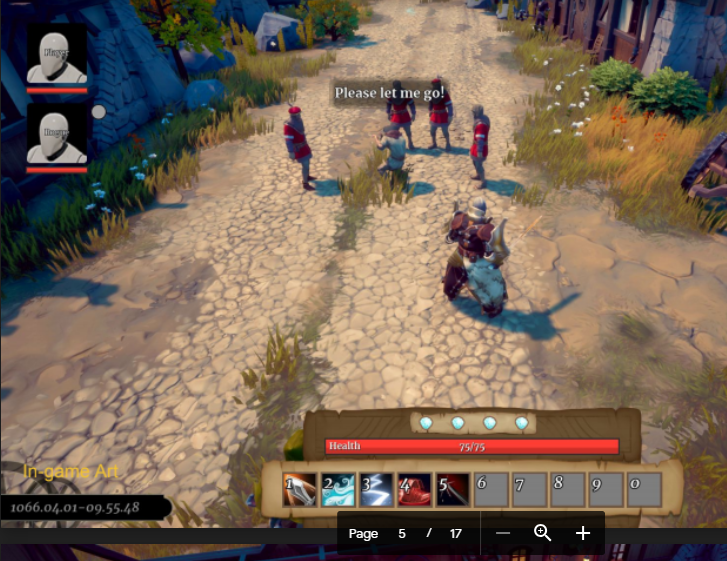 We drew our twin shortswords and prepared to defend ourselves. Fortunately, these two were weaklings, only made bold by their weapons and the symbol of their guild. We made quick work of them, but now we had another problem: There were two men dead by our hands, and we’d barely even gotten into town!

We dragged the two bodies into the bushes nearby to buy ourselves at least a little time before they were discovered. As we had just arrived in town, nobody even knew who we were yet. Our hope was that it would take a long time to connect the crime to us, and that we would be long gone before that happened.

Maybe Not Quite A Hero...

As we’d already done our good deed for the day (and because the Witchstone dev wanted to show off some more of the game’s systems), we decided to engage in a bit of robbery. We found a house with an open window, snuck inside, and took everything that we could get our hands on. Unfortunately, as this was a peasant’s house, there wasn’t much to take. Equally unfortunately, said peasant was home at the time.

One murder later, we took the man’s brass ring off his dead finger and escaped. The dev assured me that the ring would come in handy later.

I decided that just killing two grunts wasn’t enough of a punishment for a guild that goes around bullying the townspeople, so we went to cut the head off the problem. We snuck into the guild hall which, unsurprisingly, had some people inside, including patrolling guards, and this was where I saw the most interesting game mechanic of the whole demo.

The stealth skill grants some special abilities while sneaking. In our case, it was high enough that we could tell where the guards were looking at any given time. Remember in Metal Gear Solid how the enemies had cones of visibility? It was a lot like that. By keeping low and quiet, and going behind the guards’ backs, we quickly reached the guild leader’s office. 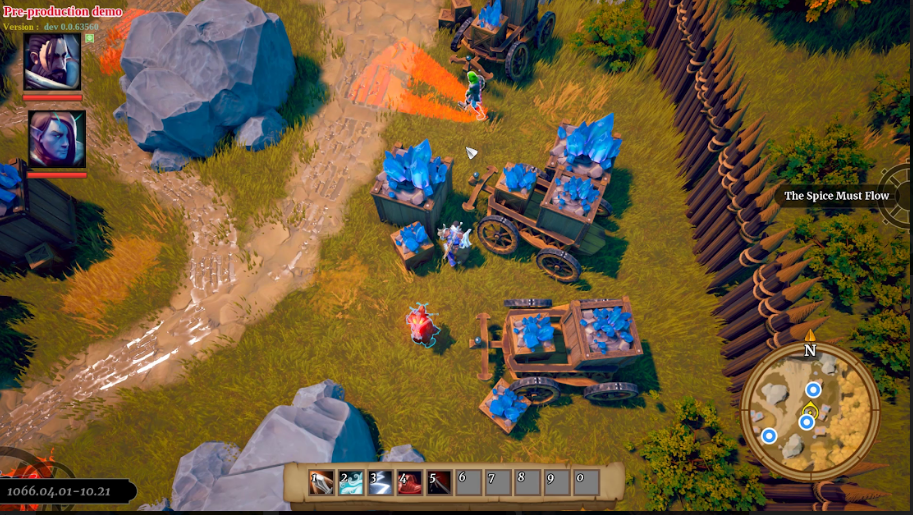 He spotted us before we could assassinate him, and after we failed miserably to bluff our way through the situation, another combat started. Truly, combat might be the least interesting part of Witchstone, at least at low levels. You just attack and hope for a good enough roll to hit, rinse and repeat. It’s the mechanics of low-level Dungeons and Dragons with none of the banter and table talk that makes a tabletop RPG pop.

Anyway, it was a close thing, but we managed to put down the leader of the Guild of Jerks (as we decided to call them). Since he would undoubtedly be found quickly, we planted the dead townsperson’s ring on him to throw off suspicion, and this is where our schemes began to fall down around us.

We left the guild hall the same way we’d come in. As expected, it didn’t take long for them to discover that their guildmaster had been murdered. Someone recognized the ring we’d left, and they went to ask the man some questions.That, of course, led to them discovering that he was also dead, and so a townwide search for the murderer began (surprisingly, the two bodies near the entrance to town hadn’t been discovered yet).

Since we were new in town, it was unlikely that they’d find anything connecting to us specifically, and as long as we didn’t hang around we could probably make a clean getaway. Meanwhile, the Guild of Jerks would be in disarray for a while until a new leader could step in and get things back under control, which would likely give their rival guild in town a chance to grow and expand their influence. Things were looking pretty good for our serial killing hero.

Unfortunately, at this point our interview time was over and I didn’t get to see how that all played out.

Technology, Imagination, And Chasing the Dream

Game design and programming has come a long way in recent years, and we can see it in all the games around us. However, at PAX East I saw something special at the Spearhead Games booth: the quest for true Dungeons and Dragons freedom in a digital world. I won’t say that Project Witchstone is the totally open world, completely player-driven experience that we’ve been waiting for, but it might just be the closest thing yet. I was very impressed by what I saw, particularly all of the different NPC behaviors interacting with each other and reacting to our actions to create a world that felt cohesive and real. 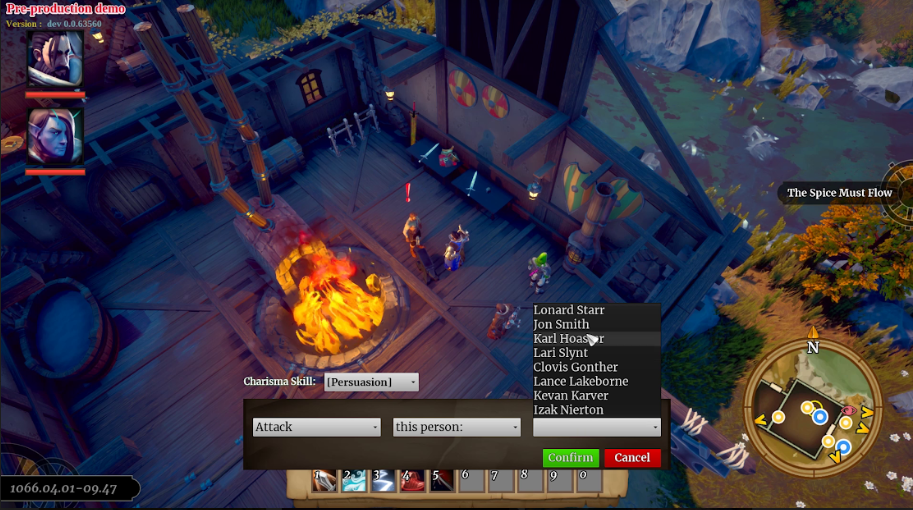 As with any good RPG, social skills can be as important as combat skills. Unfortunately, our ranger wasn't good at them.

If I were to compare it to a more recent game, it’s like a single-player Legends of Aria. It has the same sort of bare-bones gameplay, allowing you to focus on crafting your story. However, while Aria is intended for groups of players to create their own worlds (much like a homebrew tabletop RPG), Witchstone is trying to bring that same feeling into a single-player experience, with elaborately programmed NPCs taking the place of the other players.

Unfortunately, even an early access version of Witchstone may be a long way off yet. It’s slated to come to Kickstarter sometime this year, and presumably we will get more specific dates and milestones when that happens. If you’d like more information about Project Witchstone or Spearhead Games, check out their website. In the meantime, I will definitely be keeping my eye on this one. Ambitious projects don't always succeed, but its efforts like this which push games forward as a whole. Besides, if I already had fun with their first demo, what will they be capable of next year?