A Preview of Phogs With A Total Stranger

Learning To Be A Two Headed Dog For Fun And Profit

When I went to the massive, colorful booth for Phogs at PAX, I was excited for my appointment. The game looked absolutely delightful, and I had been digging the more accessible and whimsical titles over the complex and grim ones. When it was time for a hands on demonstration, I asked if I would be playing by myself or with someone else thanks to the nature of the game; I was pointed over to the next person on line. She was just an attendee at Pax, not someone who had worked on the game, and she was going to be the other half of my two-headed dog. 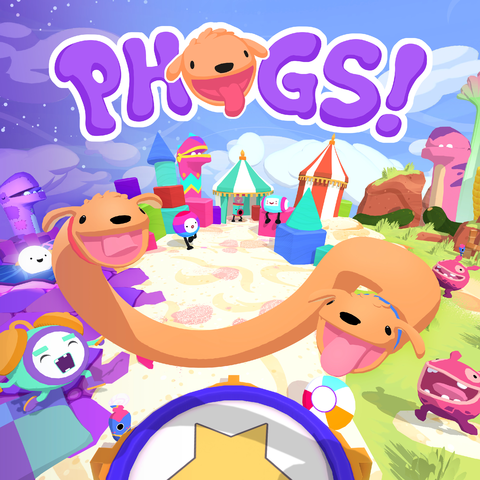 So what were we both waiting for? According to Kal, one of the video producers for Coatsink, the game’s publisher, Phogs stands for physics dogs. You play as a two-headed dog, except the heads are at each end of its long noodle-y body. You can do mostly everything that a normal dog does too - bark incessantly, get pets wherever you go, eat things you probably shouldn’t... it’s all in there. What made the game a truly interesting experience wasn’t just experimenting with its wacky physics, but cooperatively solving those physics-based puzzles with a total stranger and having a great time doing it.

Playing Phogs is simple: in co-op you each control one of the Phogs’ heads. With it you can bite onto things, bark and stretch your half of the body. Yes, the premise seems a little too simple on paper, but the way that these few tools are implemented are what makes it so clever and charmingly weird.

According to Kal, the world of Phogs is inspired by everything going on inside a dog’s head. Sure, some dogs are smarter than others but this game is inspired by what was assumed to be the three things our best friends always think of - play, food and sleep. Was there a plot we had to be aware of? Some overarching goal? Probably not: most dogs I know don't really care about things like master plans. 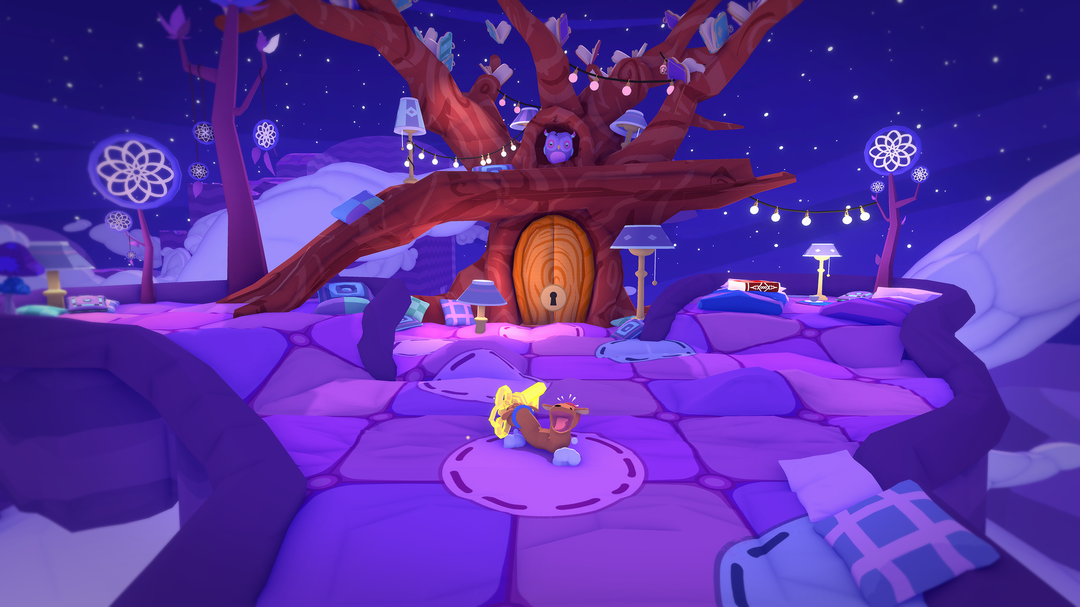 You can make the Phogs bark at nothing in the dark - just like real dogs!

Our demo started off on the play level, and immediately the colorful explosion of the game’s art style hit us. Never mind that dogs can’t see colors, we can and they are gorgeous. Everything is this wonderful pastel color, no matter what the object is it looks soft and malleable. Surrounded by beach balls, sand and chew toys, me and Kat set out.

That’s when we ran into the first snag on our journey - movement. With each player controlling one half of the Phogs, players have to coordinate. When you play at home, it’ll probably be with someone you know, but that’s not what Phogs always had in mind. “You should be able to play with anyone,” said Kal, “it’s the entire philosophy between connecting the Phogs. You can’t just rush ahead, instead you have to stick and work together.” Eventually Kat and I synced up and were able to move around with no issue. 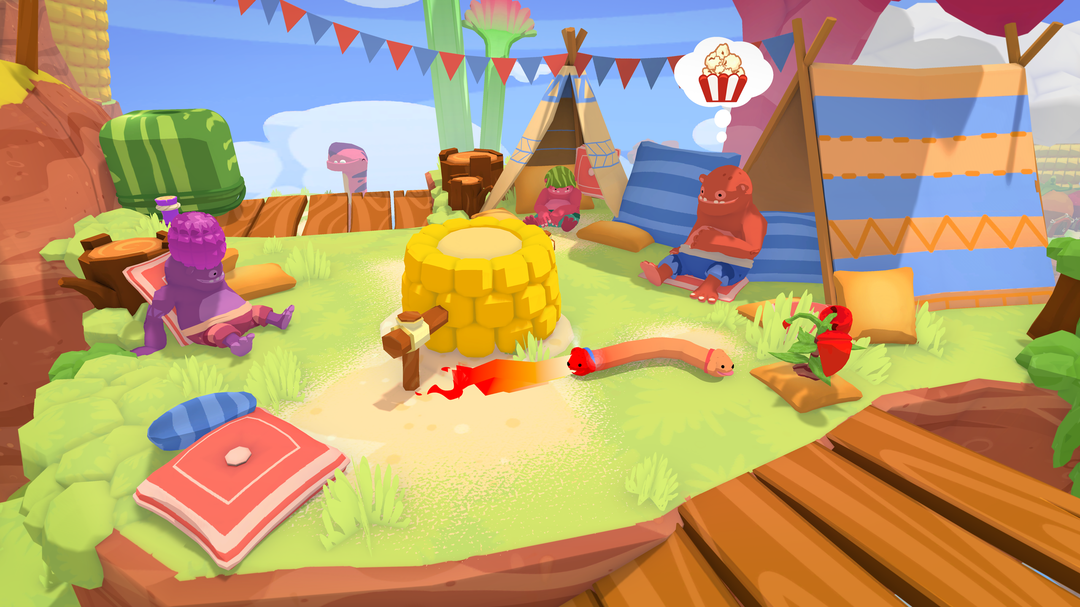 Giving hungry giants popcorn is one of your first challenges. ...Is one of the heads breathing fire?

That is, until we found something to do. Then, much like two actual dogs, we went towards what interested us the most... even if they were in opposite directions. It ended up with us both panicking, talking it out a little and then going over to what Kat wanted to check out first. Soon enough we ran into our first physics puzzle involving watering mushrooms until they grew to giant proportions and strange little creatures that just so happened to love eating mushrooms. But how do Phogs water things? Well, one chomps down on an open water pipe, and water goes through and out the other head! I promise, it’s cuter to watch than it’s possible to write down.

The beginning of our demo was about as easy as the game could get. That extended pretty well into the second level that was themed off of play, until the challenge of co-operation began to ramp up. That’s where we started seeing chew toys and ropes, and the puzzles got a little more, well, playful. We swung the Phogs from hanging chew toys on walls to cross a gap and guided a massive golf ball into a hole by extending our body. 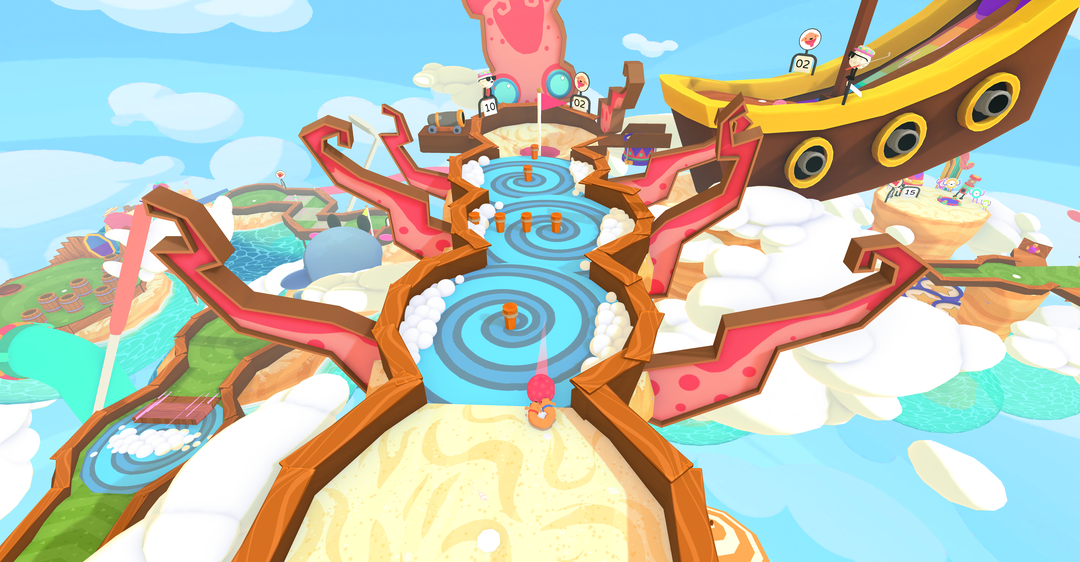 Playing with physics and figuring out how to manipulate it is half the fun!

All along the way were golden bones. There wasn’t really any rhyme or reason for them in the demo - they would just pop up after solving some puzzles or be in difficult to reach places. Me and Kat had a theory that ended up being confirmed by Kal when I spoke to him after we played. It turns out that those bones can be spent to unlock hats for the Phogs to wear! Kat and I thought it would be the only thing that could make the game cuter, and if I had to hazard a guess we were probably right.

Our demo ended on a sleep themed level. The ground was made out of mattresses, and puzzles played around with light and dark. To get through solid walls made of shadow (sounds like something out of Dark Souls, huh?) one of us chomped down on a ball of light with a little smile-y face on it. Naturally, the other end turned into a flashlight that could cut through the wall. After climbing up a pillow fortress and taking a seat on a rowboat, we each bit an oar and rowed off into the night sky. That dream-like sequence is where our demo ended. Kat and I thanked each other for playing so well, and we each remarked on how smoothly playing together went.

A Game That Captures Whimsical Fun And Companionship

In any ordinary puzzle game, I get hung up in some places. Playing with another person, I expected twice as many points where I just wasn’t sure what to do. In Phogs not only did we not get stuck, but when we did find a puzzle that was actually challenging, Kat and I took multiple different approaches. No matter what happened - even if we went the wrong way - there wasn’t any frustration. Kal says the game was designed to do exactly that. “The puzzles themselves aren’t too difficult, generally you’re not sat there stumped,” said Kal, “there’s always an inkling of a solution, it may not work but you have an idea. And even if you fail, and you end up flopping around, there’s fun in that silliness.” 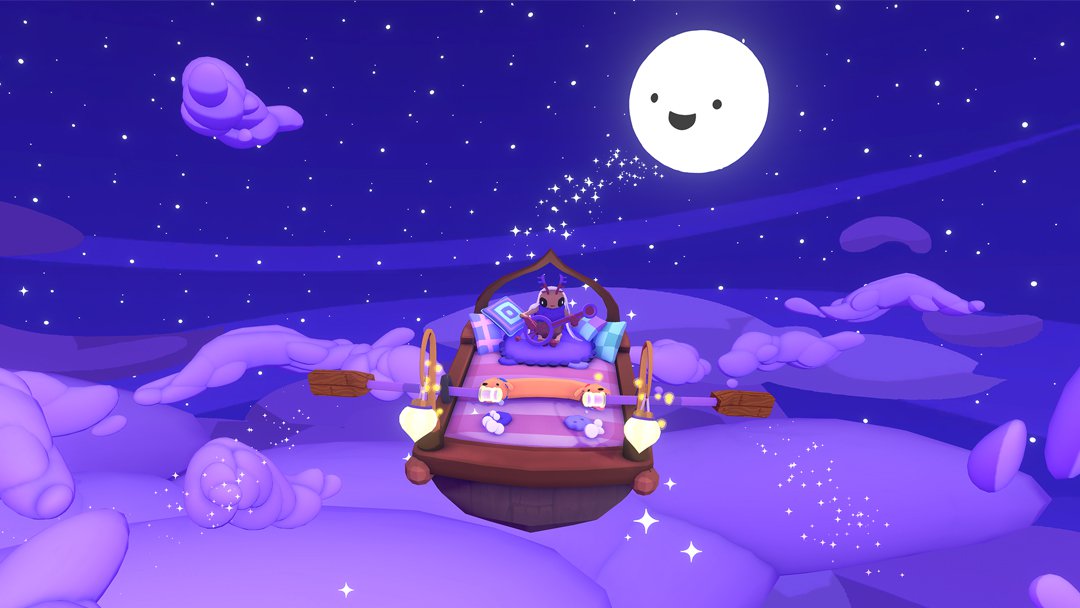 This peaceful ride into the night sky was the perfect ending to our energetic demo.

Going in to my appointment to play Phogs I was exhausted. It had been a long convention already; my feet were killing me and I was ready to hop in bed and call it a day. When I left, that attitude was all gone, and I chalk that up to the game entirely. It might just be impossible to be mad, or grumpy or annoyed when you’re playing Phogs. It’s one of those titles that’s equal parts energetic, cute and wholesome. The best way to put it is Phogs finds that button in your brain that releases dopamine and all those other good chemicals and just mashes it until you put the controller down.

So where does that leave the game post-Pax? So far it’s slated to release this year across all platforms. No news yet on how much the game will run you, but it will have a play-time of about six to ten hours. As we get closer to the release date of Phogs we’ll have more news for you on the adventures of this weird and wonderful noodle-y pup. Until then, you can check out the game’s Steam page here.