Round Two For Voltron Robot Goodness

We don’t get to talk about giant robots nearly enough here at Sprites and Dice. Today, I’m pleased to break that silence with a quick preview of a game I first saw all the way back in 2018! AEGIS Combining Robots is going live with a second edition that expands their first box’s offerings, adding all sorts of new and highly requested modes of play, rules updates, and of course a chance for folks to get their hands on a reprint if you’ve never heard of this fantastic title.

Did I mention you can combine these robots Voltron-style, making them into bigger, badder forms? Let’s take another look! 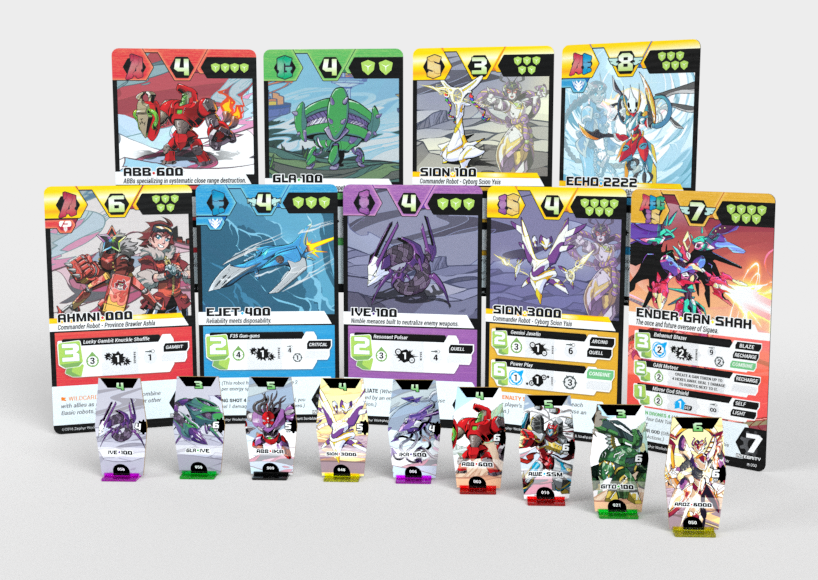 Each individual robot comes with their own reference card and standee. So does each combination they can make! It's refreshing to see standees, as this keeps costs and box size very reasonable!

As a quick recap to things I discussed nearly four years ago, AEGIS was typically a 2-4 player affair where players went head to head battling bots for supremacy on the battlefield. I say “was” because there was also a deluxe 6-player map for grand melees, and also there’s now a solo mode by popular demand. This is just one of many ways that the classic title has grown over the years. Robots still come in five basic varieties (whose abbreviations spell out the title of the game), and it’s up to you to decide which you’ll carry into battle for their synergies, their style, and of course their potential for combining into bigger bots!

I have always been impressed by both the game design and the heart on offer in this tiny box. The designers’ aim was to release something in a small, standalone box, at a reasonable price point, that could provide all the depth and excitement of big tabletop miniatures wargames. In this, I think they’ve always been very successful, and that has only been proven more and more over the last 4 years. The original box came with over 100 robots and their various combinations, which was already a staggering amount of value for your money. The new second printing adds 100 more new bots to play with! My brain can’t even comprehend how much laser, missile, pneumatic punch, booster-flying, alloy blasting, sonic sword slicing goodness that must be.

Both a standalone expansion or a combo with the original box are available.

The rules to AEGIS remained streamlined as they ever were. Your robots provide an energy income each turn, and this currency is collectively spent to move your combatants’ standees and activate their attacks. It can also be used when robots stand next to each other to snap them into a combined, bigger form with new powers! In these cases, you remove their standees and cards from the table and replace them with the combination mech you’ve set aside with your team’s build. Back and forth players go until one side obliterates the other. Or players can play in a respawning arena mode and fight until one hits a point limit! That’s another new feature that’s been added by popular request. The boards are now 3-sided as well (rather than simply reversable), allowing for even more map variety. And if you just want to pick up some random bots and play, a draft variant has also been included in the latest rules update.

There are status effects and special abilities to spice things up, but these are thematically easy to remember and never seem to bog down the gameplay. The fact remains, whether you’re a newbie to this fantastically streamlined and engaging battle bot brawl or a veteran looking to just pick up the new goodies to add to your existing box, this campaign has you covered. There’s a level that will suit everyone’s needs, so grab what makes you happy!

No KS exclusives or FOMO here. Just savings over retail and a chance to grab anything you're missing. A classy Kickstarter if I've ever seen one.

In my opinion, AEGIS hits all the sweet spots. It’s quick to teach and fast to play. The rules make thematic sense, making them easier to remember, and you spend more time in the good stuff, the tactical blasting and being blasted, rather than mired in minutiae. You can build a team that combines some of your bots into slightly larger versions or center a team that goes all out in 5-as-1 Megazord style. You can draft teams on the spot, preassemble teams for your friends, or organize constructed play as your group falls down the rabbit hole. Or you can play solo now! Or play in a respawning mode where you care less about losing key players on your team. It’s clear that Zephyr Workshop has been listening to feedback these past few years with a clear love for its game and community. If that wasn’t enough, they even brought on new artists to pack out the expansion content, some of whom I’m to understand also did art for the also fantastic TTRPG, Lancer. All these new artists clearly know their giant mechs!

Do yourself a favor if you love fighting robots, giant mech battles, head-to-head games, and/or a Voltron aesthetic. Or if you’ve ever wanted to get into a tabletop wargame but didn’t want to pay a small fortune to do so. Give this run of AEGIS a look. You can find their campaign running between January and February 17th here. I guarantee you’ll like what you see.