PAX East 2015:
Bioshock and The Binding of Isaac had a baby, and it looks a lot like Subaeria 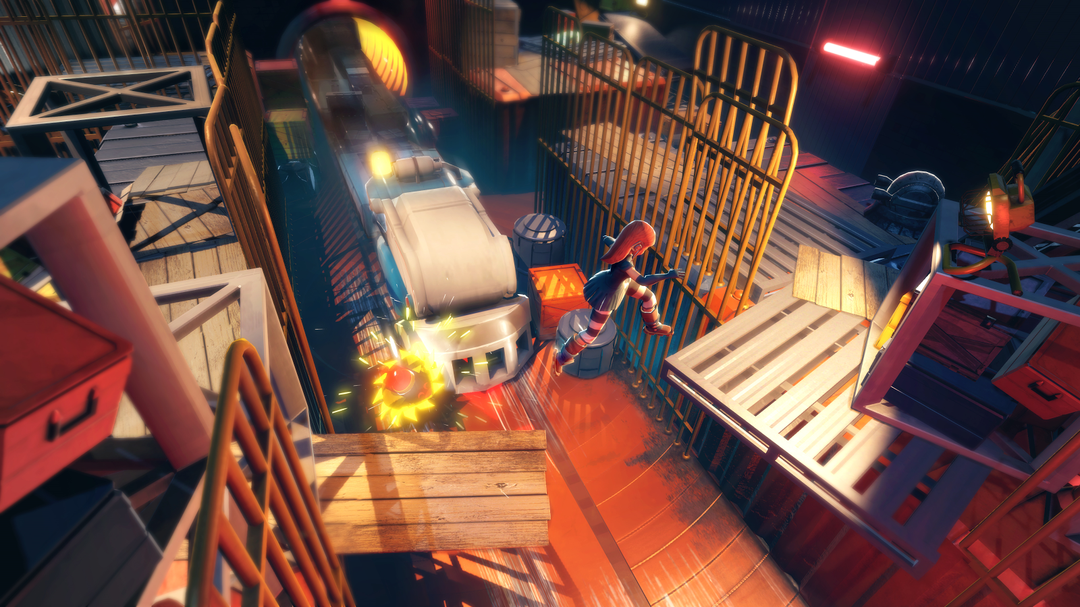 Two types of games dominated the Indie Megabooth this year: ones that claimed to be as addicting as The Binding of Isaac, and ones that claimed to be as brutally difficult as Dark Souls. Keep in mind, this isn't a bad thing: on the show floor, developers need to convey what their game is in mere seconds to catch a passerby's interest. Often the best tactic for this is yelling the names of two games that your game is like; if they sound like polar opposites or like they might be perfect in combination, you will certainly grab the attention of people nearby. Hearing that indie developer Illogika figured out a way to mash together Bioshock and The Binding of Isaac was enough to pique my interest. Trust me, I'm glad I was. 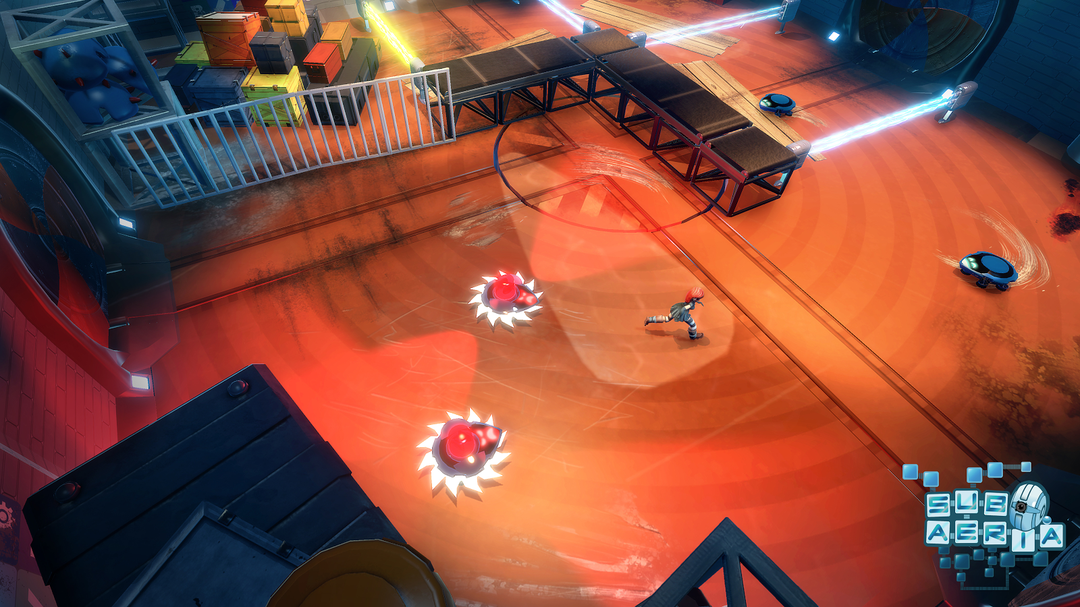 Let me decompress that elevator pitch for you: Subaeria takes the random dungeon layouts of The Binding of Isaac, drops them in an underwater dystopia much like Bioshock's Rapture, makes the government as ruthless as in The Hunger Games, while telling a compelling story from multiple playable perspectives. The intent is to take the roguelike formula and somehow prioritize storytelling over all else.

Even if game-play was the primary element on display at PAX, it was apparent that the story was going to be a huge part of the game. The demo I played puts you inside the shoes of Styx, a resident of one of many sections of the underwater city of Subaeria. Word was just received that your home town is going to be the next module dropped from the city for budgetary reasons, meaning the lives of your friends and family are in danger of being cut off from the rest of the city, left to starve underwater in a giant plastic cube. Basically, you're the underdog that has to stop the evil corporations and save the day.

Even though Styx was the only character playable at PAX, expect to see three other playable characters from all sides of Subaeria, from the rich to poor to good to evil. It's likely that these characters will probably start their stories in different parts of the world, and each character will have their own unique story. Even though this game is story driven, it's still a roguelike at its core, meaning certain elements of the story will be randomly generated. There's no word on how any of these other characters will play or what their stories are, so the following impressions are entirely based off of how the one character Styx played.

Every round you play of Subaeria will start you at the beginning of a randomly generated grid of rooms, all connected by underwater tunnels. Since the world the game is set in is modular, it only makes sense that the levels themselves are structured the same way. It's great that the theme and mood of the game are being made to feel so hand in hand.

Unlike many twin-stick games, Subaeria's right analog stick doesn't control a gun or even a weapon. Instead, your character has a glowing orbital drone that will move anywhere within a certain radius of them with a tilt of the right analog stick. This drone is your way of using the active powers you pick up during the game you can only hold two at a time, and each combination requires a different strategic approach to each room.

I only encountered two powers during the demo, so I didn't really get to see how well using different combinations would work. However, each had their merits in teaching me the game's mechanics. Every room is a small puzzle, and there are multiple ways to tackle each one of them. See, you don't actually need any of the items to win. They certainly help, though. 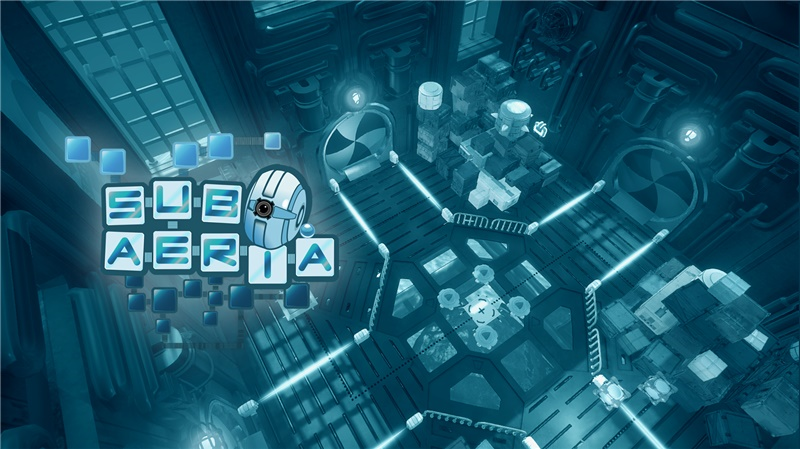 The first and most valuable of these items allows you to control enemies simply by hovering over them and selecting them with your drone. This helped illustrate one of the most important mechanics of the game: enemies and hazards of like colors cannot harm each other, but different colors can. For example, a blue robot can safe pass through a blue laser, while a yellow one would explode on contact with that same laser. When remotely controlling any of these enemies, it is easy to just drive them straight into other enemies or hazards. Things almost seem a little too easy with this power, at least until some of the harder rooms.

The second item's ability is a little more subtle: a decoy is dropped where your drone is placed when you activate it, and your character turns invisible for a brief moment. This allows you to distract enemies in scenarios where it's easier to speed through a level then it is to fight. It also helps you lure enemies into traps, or ideally each other. This item demonstrates that you don't need direct control of your enemies to kill them, as clever movement will accomplish that for you.

Without these powers, your character is defenseless, but they can still find other ways to dispatch of enemies either by way of dodging or manipulating objects by pushing into them with your drone. 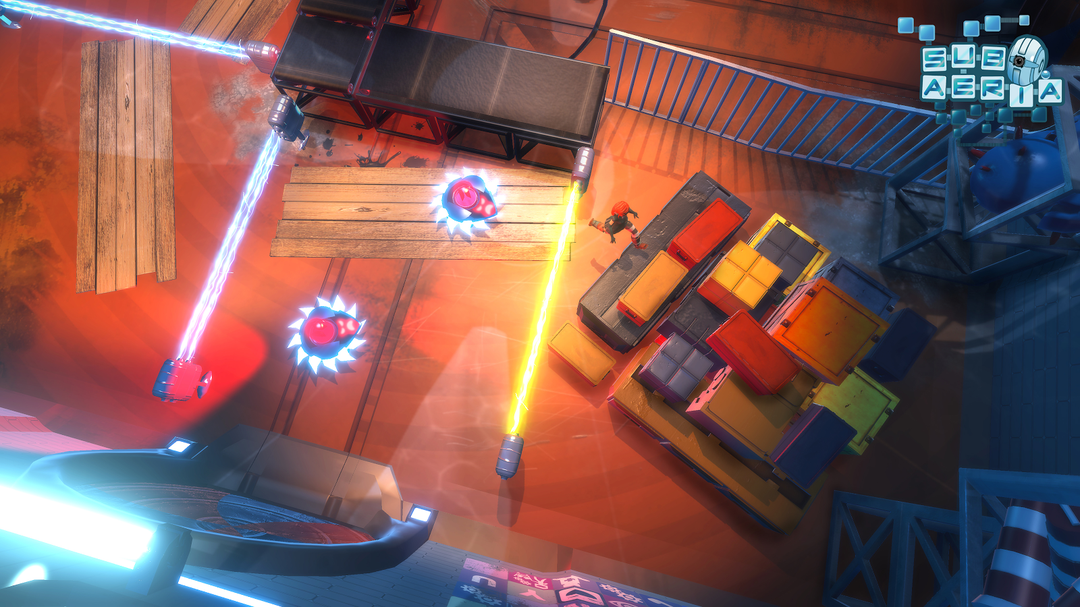 Like many other booths at PAX, there was a small swag-related incentive for finishing Subaeria's demo. Because I'm stubborn (and I like winning things), I saw that as a reason to stay at that booth until I won. Thankfully, I managed to make it to the end of the demo on my second try. The final boss was a giant robot that spun and vacuumed in everything in sight to spit back out as a projectile weapon. The boss was surrounded by force fields that were the same color as the enemies it was sucking in, so hurting it required disabling the fields in time for the boss to suck in an enemy of a different color and damage itself. Figuring out how to turn off the force fields while dealing with enemies is a puzzle in itself, made tougher by the threat of potentially dying and starting over again. There is difficulty in this game, and part of it is going to be learning its very interesting approach to combat.

Even though I only saw a small glimpse of Subaeria, it has my brain churning with possibilities of what's yet to come. So far, the game is only announced to come out on PC later this year, but it's likely we might see it come to other platforms in the future. In the meantime, you can keep up with updates on the game through Illogika's blog, which is chock full of cool articles about their game development process. For me? I'm just excited to see how well they blend a storytelling approach to a rogue-like game. Can't wait to try and save my sinking town again soon.