Cleaning Up The Streets, 90's Style 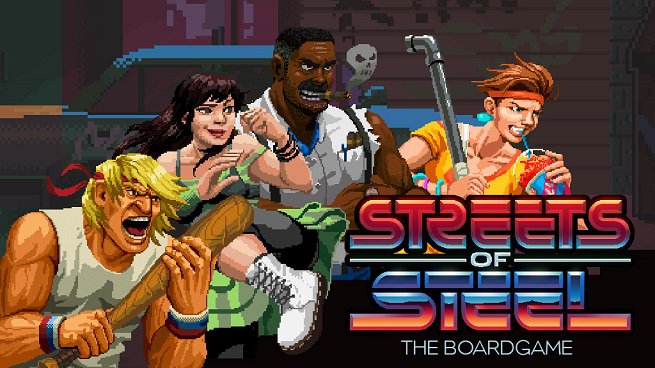 Streets of Steel is an attempt to take the side-scrolling, beat-em-up goodness of Streets of Rage and put it into a board game. It pits heroes like Mayor Van Dammage and the rollerblading ex-lawyer Candy Connor against waves of thugs, arsonists, and ninja kangaroos as they fight to clean up the city.

Ryan Lesser of Wild Power Games shipped us one of his demo copies after PAX East, so we were able to play through the first level and get a feel for the game. Ryan’s career has been mostly in video games, most notably as the creative director for Harmonix, and he has a penchant for bringing ideas from the video gaming world to the board game industry - see my review of High Heavens, where we discuss his idea of bringing a HUD to a miniatures game.

The verdict: He’s done it again. Streets of Steel most definitely captures the essence of old arcade brawlers, quarters and all.

The Good: Fast And Furious

Streets of Steel thrives on the same quick, punchy action that got us to feed all of our spare change to arcade machines back in the 90s. Player characters move from left to right, pausing only to fight anything unlucky enough to be in their way. Each turn, the turn player gets three actions that can be used to move, attack, or use a special ability, then action passes to the enemies.

After each player’s turn, the enemies get an action which is drawn randomly from a deck. Enemies tend to be faster and less predictable than the characters, with actions ranging from walking toward the nearest hero and attacking (if able), to attacking the hero with the most Health regardless of range, to hitting all heroes on their same street tile.

Oh, and after all players have had a turn the level will “scroll” to the right, and anyone on the leftmost tile will be killed. Keep moving!

The way Streets of Steel imitates side-scrolling video games might just be my favorite thing about it.

It’s the little things that make a big difference.

Of course, no side-scroller would be complete without hazards. To mimic the way you’d have to get the timing right in order to avoid damage, the deck that controls enemy actions has numbers printed on the backs of the cards. Whatever number is on top of the deck is how much damage the hazards on the board will do to players who enter and/or end their turns on those tiles. In the scenario we played, hazard damage ranged from 0 to 2, though I wouldn’t be surprised to see those numbers go up in later levels. So crossing through a hazard when there’s a 0 on top is totally safe, any other number means you risk taking damage.

Finally, what’s a video game without boss battles? At the end of each level there is a difficult boss to be fought, with a unique deck of cards that replaces the standard one for the level. The one we faced darted between characters too quickly to catch, spawned extra enemies, and once even healed the damage we’d dealt (the bastard). It was a close call, but we did eventually manage to hit the boss six times and put him down for good.

Overall, Streets of Steel was easy to learn and a thrill to play. It's thematic, it gets to the point, and it's fun to play with friends.

The Bad: Pray To The RNG Gods

If there’s one aspect of Streets of Steel that’s not for everyone, it’s the heavy reliance on random chance. Characters attack by rolling dice, the enemies act unpredictably through card flips, and even the items are randomized and often come with drawbacks, like the cursed katana that took Adam’s last point of health when he picked it up. It certainly keeps things exciting, but it can be frustrating to lose a life to a die roll.

However, the randomness is offset by the Wild Power mechanic. Each character can gain Wild Power tokens by killing enemies or taunting (like building up a special meter in a fighting game) and use them to perform various special moves or - what we most often used them for - to reroll dice. The special attacks seemed a bit superfluous in the game we played, though I suspect they’ll become more important later on as the enemies get stronger. There are also two other things that offset the frustration of losing to RNG: Short levels and quarters. 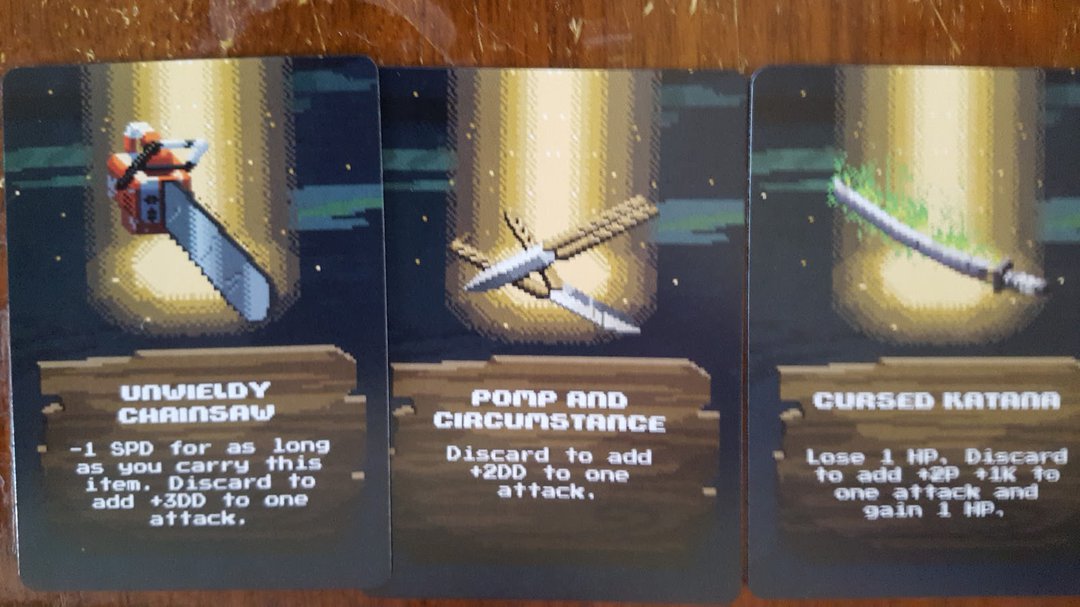 Not all items have drawbacks, but some of them are pretty significant.

You spend quarters to get extra lives, because of course you do. While the default is to start a level with three quarters, good for one life each, Streets of Steel does recommend adding or subtracting quarters to get the difficulty level you want. Also, obviously, there’s nobody stopping you from just using an extra quarter if need be.

The short levels could be a good thing or a bad thing, depending on your preference. It took us about an hour to get through the first level, including the time it took to learn the rules. While that does make it a bit less upsetting to lose to a run of bad luck, it also means that there’s less gameplay for your money. Assuming all the levels are roughly the same length, even with the stretch goal unlocked to give us four levels instead of two with the initial release, you’re only getting a couple hours of play.

I’m also concerned that Streets of Steel may get a bit “samey” after a while. There isn’t much variation in the mechanics or in what players can do, and there’s no “leveling up” or any way to customize the characters. The only things that change are the hazards and the enemies. For that reason, I have a feeling that this game is going to live or die on expansions - though, given the stretch goals that were already reached, it seems to be off to a good start on that front. 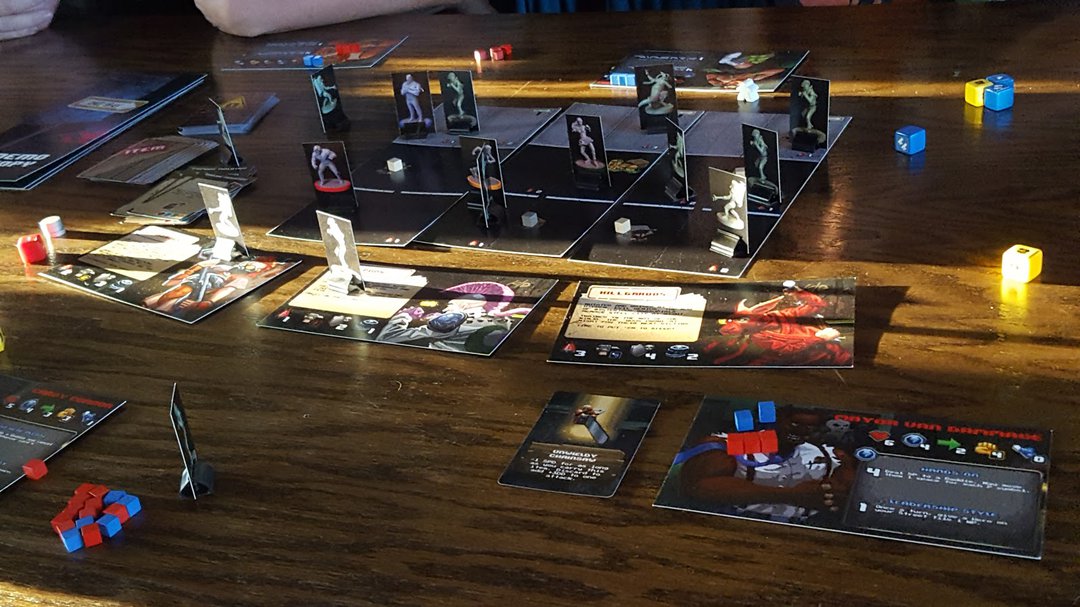 Things can get pretty hectic on the streets.

Streets of Steel is a near-perfect conversion of the classic brawler genre to a board game format. Even the decisions that seem questionable, such as the limited player options and the lack of any character growth or customization, are faithful to those older games. If you’re into fast paced action and aren’t put off by a bit of random chance, I definitely recommend checking this one out.

As of publishing this article, Streets of Steel is on Kickstarter with about a week left. Fortunately, there is multiple options for gamers that want to invest: there is a 'pixel's only' version which is more affordable and comes with just standees, while there is another version with full on miniatures instead. Since some stretch goals have been met, the first expansion has been revealed: if this game really seems like it could be your speed, then there is a chance for more content right up front. Get your quarters ready!