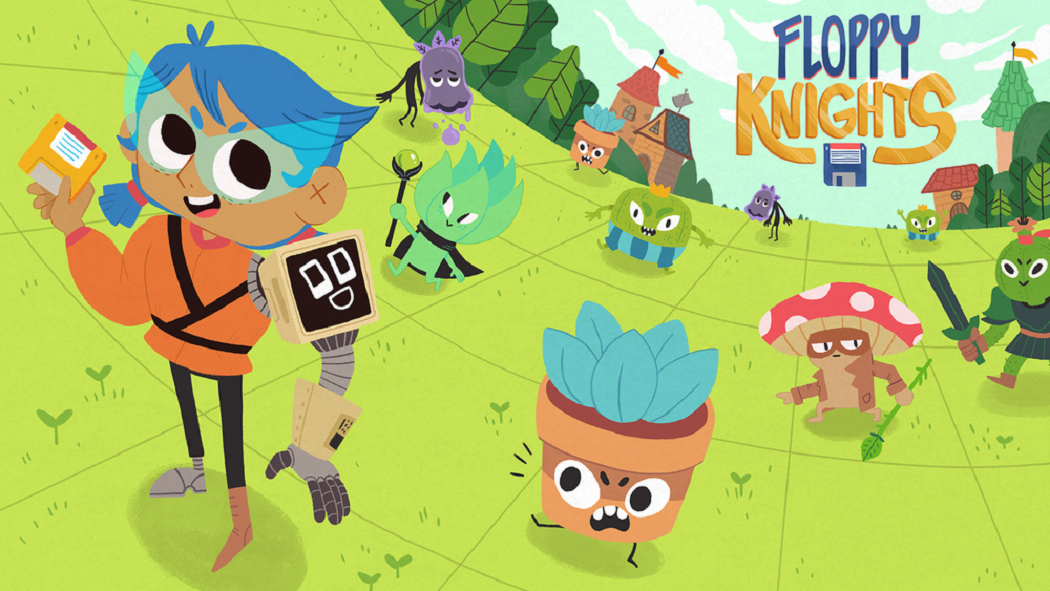 When you think of tactics style games, what comes to your mind first? Final Fantasy Tactics is the obvious example, but perhaps some Fire Emblem comes to mind, or some of Warhammer 40K titles; games that have heavy plots and daunting systems. Tactics games are complex, as they deserve to be; sometimes it’s just satisfying to put together a plan and work it to completion turn by turn. Unfortunately, this often means that these games aren’t very accessible. It’s hard to get into them if you’re not well-versed in the genre, making it easy to put off a gamer who wants to try out something new. That’s where Floppy Knights shines.

Floppy Knights’ booth at Pax East was simple; they had a great spot in a corner of the Indie Megabooth with a desk sporting two setups and another small display showing a trailer for the game. It was one of the more colorful and whimsical booths, and every time I passed it by I couldn’t help but look over. What does this have to do with the game, you may be thinking? Well, everything. 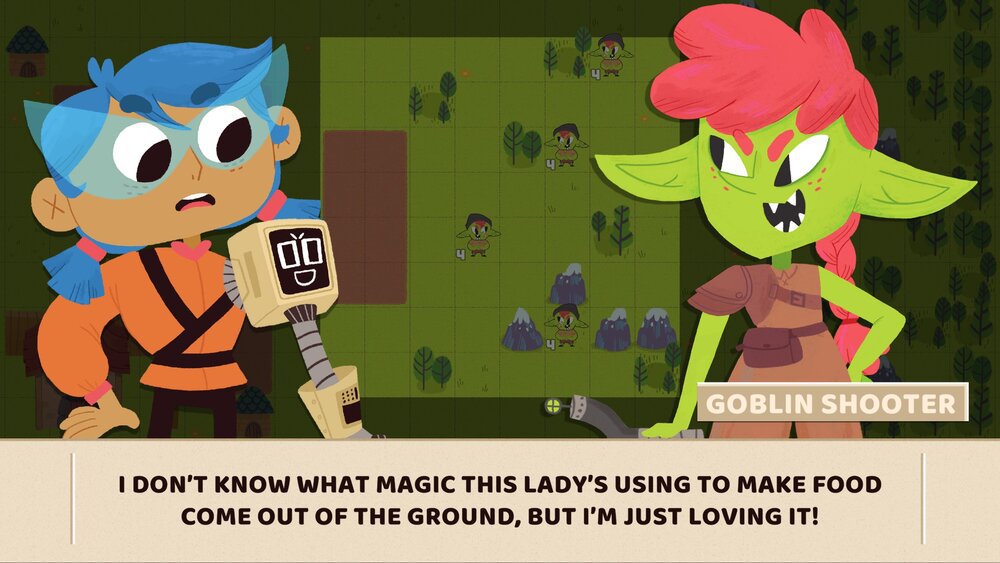 I spoke with Marlowe Dobbe (Dicey Dungeons), the creative director and main artist working on Floppy Knights, and she made it clear that the game was meant to be the first step for people new to gaming. “I would really like to make games that, as a kid I would have liked to play them,” says Dobbe. “And would have inspired me to want to make more games.”

When it comes down to it, Floppy Knights easily accomplishes that goal. The game takes place in a fantasy world where magical creatures and powers are everywhere. Its twist is where the “Floppy” part of the games’ name comes in. Technology in this world is a developing school of magic, and the main character, Phoebe, and her magical computer arm Carlton make use of mystical floppy disks to summon an army of adorable creatures. “When it came to deciding what Phoebe would use to fight,” said Dobbe, “we brainstormed for a bit. Eventually we came to floppy disks and it was a no-brainer.” 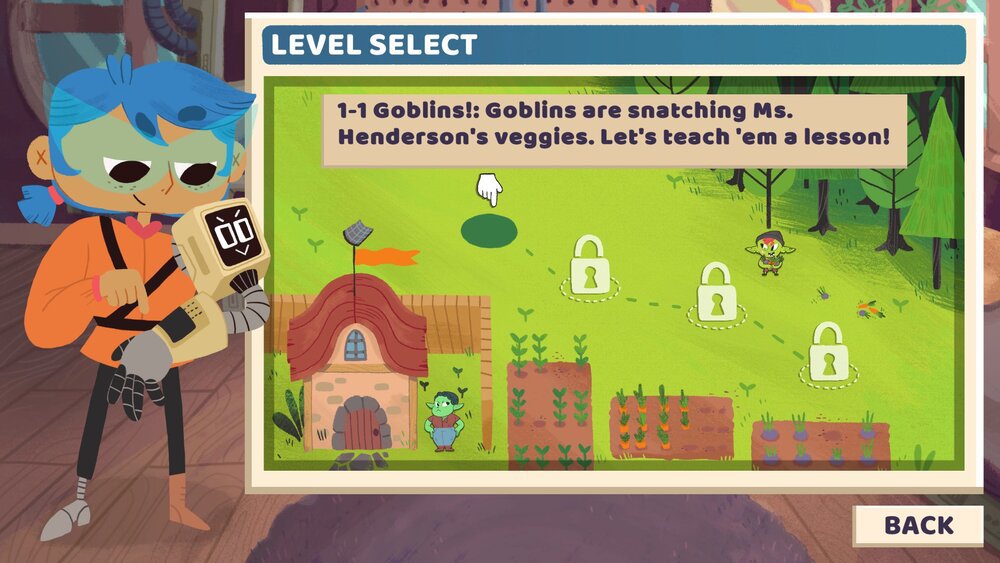 Carlton helps you as your guide and navigator as well as summoning your knights.

While younger gamers may not recognize a floppy disk, they can recognize the bright and whimsical characters that you control and fight against. From Phoebe’s radical blue hair to the wacky angry face on the Succulent Kicker, there's a sense of childish glee that's been infused into every aspect of the art. It’s almost impossible to not let out an internal “awww” even when you come across the game’s goblin enemies.

This simplicity continues into Floppy Knights’ gameplay. “From a gameplay perspective,” said Dobbe, “we’re all fans of tactics games, and we wanted to keep it the least obtuse as possible. All the info’s right in front of you, there’s not a ton of numbers you’re looking at, it’s really easy to pick up even if you’re not familiar with the genre, yeah you would be able to understand it very easily.” And, as someone that’s actually never played a tactics game myself, I can speak to that.

Floppy Knights is easy to just pick up and start playing, all goofy dialogue and whimsical charm aside. It starts like many other tactics games, enemies appear on a grid and you have to take them out or otherwise fulfill another objective. In certain areas on the grid, you can summon your knights, led by your main fighter, the Cactus Knight. 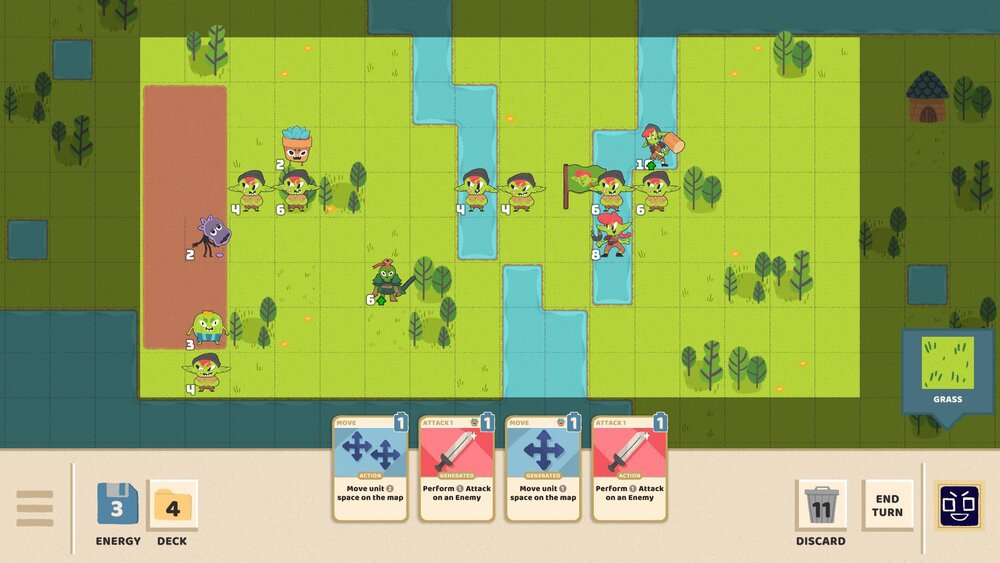 Once you have Cactus Knight down, the game’s turns part deck-builder. It’s an interesting twist that I saw as necessary. Simplicity is good, but not at the sake of interest. Pairing combat with deck building adds much needed risk and planning to the game. Every round you draw five cards, and have four energy to spend. Each card requires a bit of energy, for instance moving a single square or attacking once takes a single energy, while summoning a new knight may take two or more. Every time you summon a knight, you also get more cards specific to that character too. When you summon the super-angry Succulent Kicker, you get a kick attack card that doesn’t just damage opponents but also pushes them one block away.

The single card that really changes the game up is the “grow” card. If you haven’t picked it up yet, most of the knights you summon are plants, and growing them naturally makes them more powerful. In the demo, you could only grow cards once, but you will be able to use it more in the full version of the game. For now, using grow makes units stronger in nearly every sense - they do more damage and gain an additional ability. For the Cactus Knight, that meant a counterattack, making her into a damage dealing machine. Grow can also be used to upgrade your regular cards, making it a kind of wild card. It adds another layer of decision making to Floppy Knights’ already satisfying deck building element. 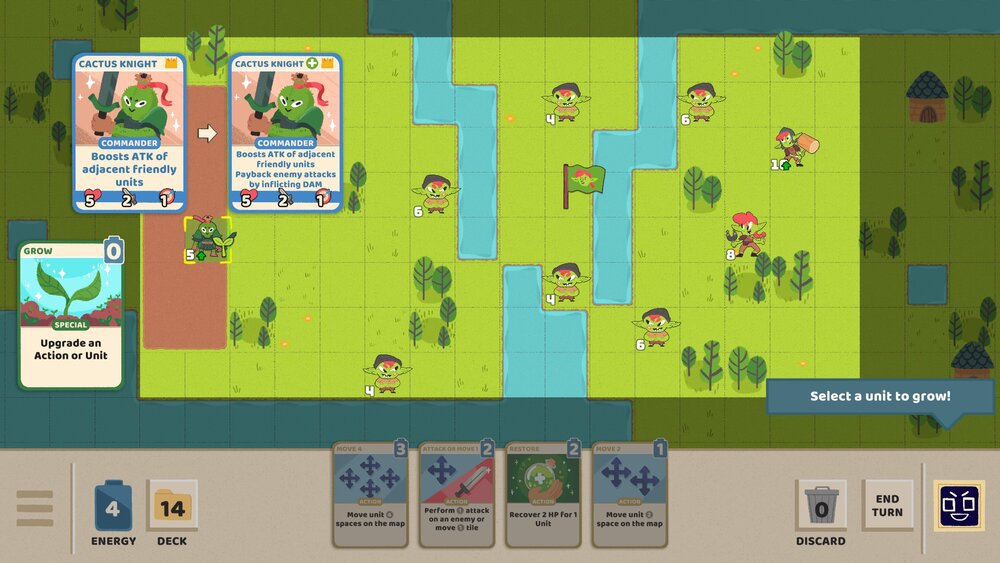 The grow card can be used to upgrade other cards or units, so making decisions using it are doubly important.

All of these different facets of the game may add up to seem like something complicated, but they’re really not. If you don’t believe me, I have a little anecdote about my experience with Floppy Knights about something I didn’t see anywhere else. I had passed by the booth a few times, and every time, even when I was waiting for my appointment with Marlowe to start, there were kids playing the game. I don’t mean teenagers or ten year olds, I mean young elementary schoolers that couldn’t have been out of second grade. Their parents would always be at their side, looking on anxiously as their kids ran up and just started playing, but to Marlowe and me, it was one of the sweetest sights of the convention.

So when will you be able to get your hands on Floppy Knights? That’s one of the few questions on the game I can’t answer right now. The game is extremely early in development - it was actually announced just February 11 - so there’s no plans for a release or beta yet. What I can certainly say is that Floppy Knights has a passionate team behind it that is working to accomplish its goals. I can and have already seen Floppy Knights inspire young gamers to explore the hobby more. If you want to follow its development as I am, the best place to go is the game’s twitter account here. I know I'm excited to see when I can get this game into my hands.