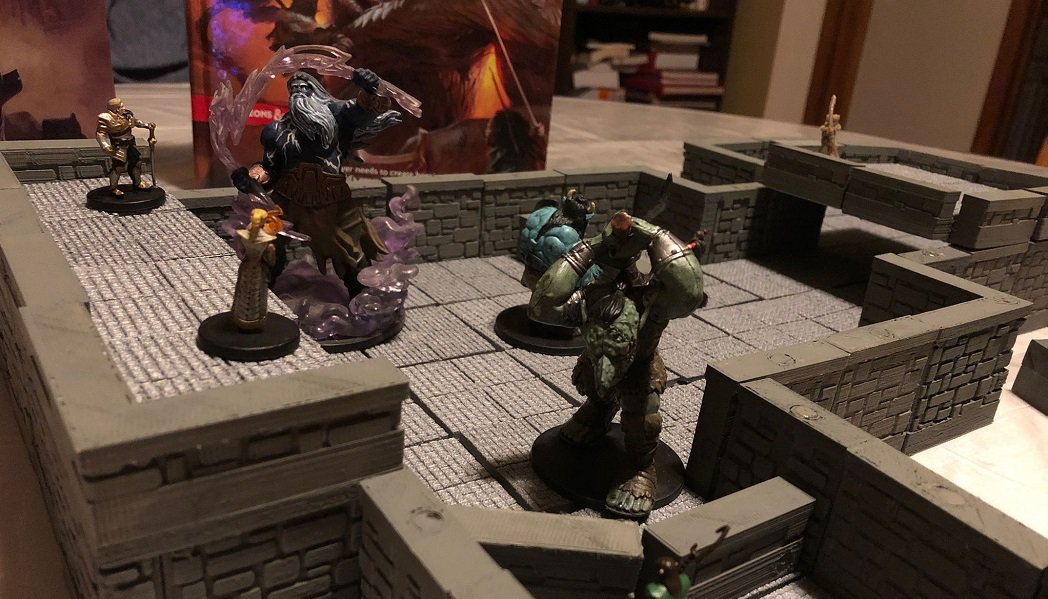 I remember the first time I saw a Dungeons & Dragons setup that floored me. I was still in high school, and for those starting sessions, we had been using one of those classic chessex erase boards. They are lovely things – easy to roll up, needing only a few markers to show where things are. For a bunch of kids, that was with more than enough.

Then I went to I-CON, a large convention on Long Island. I wandered back towards the game room that had been set up for people to play Dungeons & Dragons, and I stopped in my tracks, eyes wide; someone had 3D terrain. Not just boards and mats, but full dungeons, with caverns and floor traps and miniatures spread out over four tables, creating this landscape that I practically fell into. I got all my friends to line up with me, to try and take on this dungeon of death; I pretty much lived in that room for the weekend. It felt like a painting, immersing me in this world of story-telling. 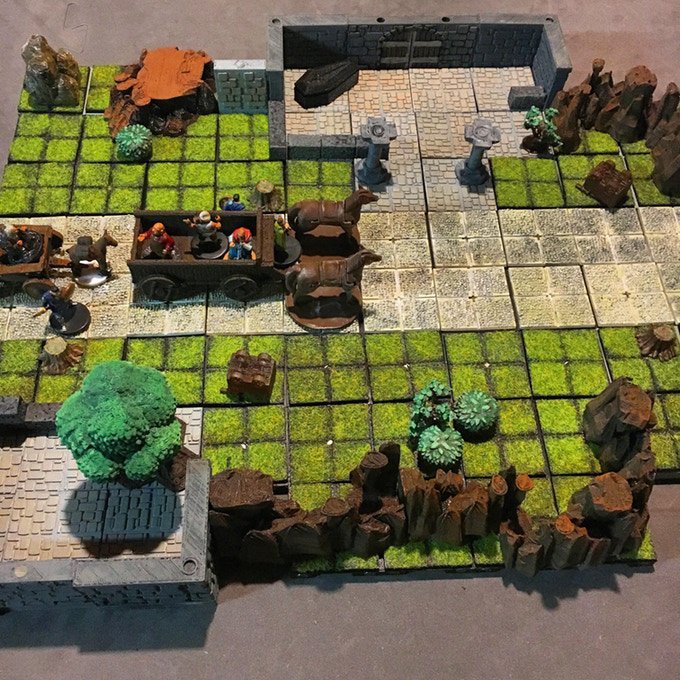 A picture of Explorer's Terrain in action, using lots of prototypes and added miniatures

My innocent 15-year-old self asked what the price tag was for this amazing resin dungeon, with all of its cool additions and flashy extras. I think I screamed when I heard the answer.

That was over fifteen years ago. I’m older now, with a real job and spending money, and I’m ready to try making a full 3D set up for some of those big moments in my campaigns. I also don’t want to spend four digits worth of my spending money to get that immersive experience.

That’s where newer manufacturing techniques and the Explorer’s Terrain Kickstarter comes in.

Magnets, Modularity, And Lots of Possibility

The set I got when I was in high school was a dream – solid heavy resin, with enough to make a modestly large room, a hallway to lead up to it, and even a small side room where the treasure might be. To 15 year old me, this was a dream. Every time we had a boss monster, my little group would set up this room, just to get that great epic feel.

Of course, after the first tenth large battle in that exact setting, the glamor wore off. That room was $90 dollars after all, and so we were going to get our money’s worth out of it.

This is where a large part of my interest in Explorer’s Terrain comes in; its modularity. Built using high grade plastic, Explorer’s Terrain is lighter than other sets I’ve had in the past. With strong magnets drilled into each piece, it lets the whole set snap together. It’s quicker to break apart, assemble, and shift around without fear of anything going wrong.

Full disclosure – I was given a pre-production set of this terrain by Joe Mashiah, the designer behind this Kickstarter. They are local to the area, and a large part of me wants to see them succeed at this project in a big way. With that being said, I’m hoping to give a balanced opinion on my time playing with the set I was given. 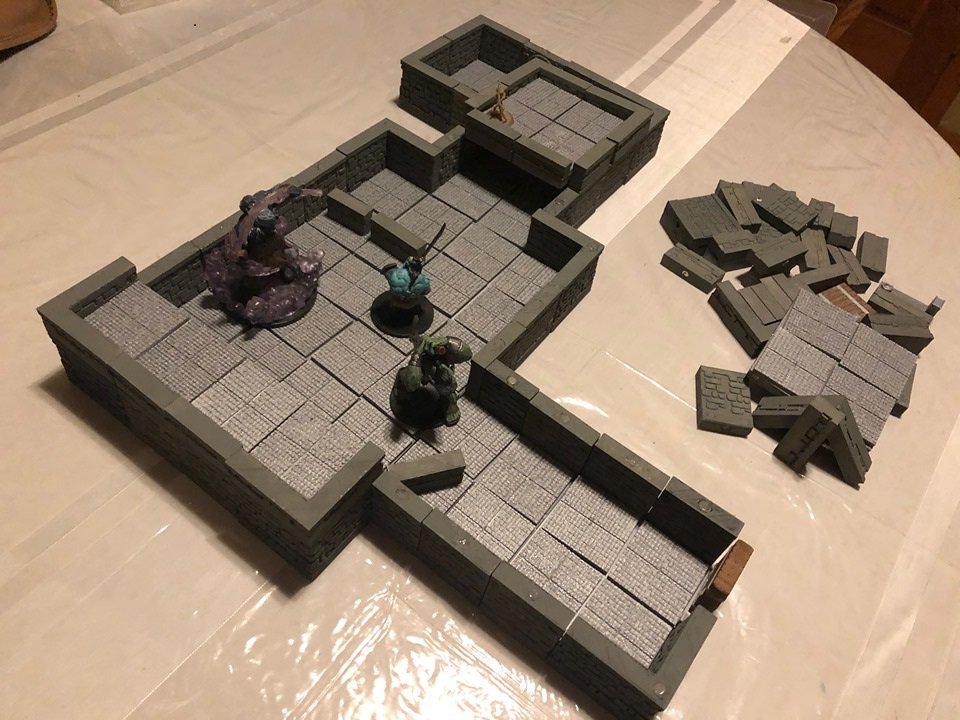 All in all, I can summarize my thoughts with the statement that the Explorer’s Terrain sets have a lot of potential and a lot of promise. I can see where this modular system can go from being an alternative to 2D grids to standing out in a big way as the system expands its library of options. If you choose to back this Kickstarter, its because you want to invest in what Joe is coming up with in the future too.

Building Off The Ground Floor

For my pre-production copy, I was given the $175 ‘Seeker’ set to tinker with. What stood out to me right away as a positive was how small the box was, how light it was to carry, and how easy it was to snap together. Some of the pieces felt a little rough or unfinished around the edges, but this was a prototype, and I was expecting that. There was plenty of definition to see the tiles on the floor and the bricks in the walls.

The second good impression was how well the magnets worked. Many of the levels in the Kickstarter talk about low walls and corners, and these were actually really fun to play with. Placing them in the middle of a large room gave it some texture; representing difficult terrain, or fallen pillars. Placing ranged units behind them gave a sense of drama. Some sets have doors, doors that are on the same magnets, able to swing open or shut.

This is where the system really shows its strength: multi-level dungeons. With sets that come with a mixture of low and standard walls, its easy to create balconies or catwalks, places where heroes (or villains) are going to feel as though they are taking advantage of the terrain. With my set, I was able to make a dungeon complete with a large room, two wide hallways, and then two balcony sections. If I had left it all on one floor, I would have had enough for multiple rooms with just this one set! I was really pleased by how much I could play with, and how easy it was to reconfigure with the sheer ease of use. If I had one complaint, I would like more 2 by 2 sections to make longer narrow hallways with, but that’s a minor thing. For someone who has no 3D terrain at all, this set gives you a fantastic amount to play with.

The Opportunities Still To Come

This section is dedicated to where I see Explorer’s Terrain really starting to blossom; What separates this terrain from others is its modularity in the tiles themselves. Each set of tiles you receive are not set strictly as ‘grass’ or ‘dungeon’. Instead, the tops of each tile can be removed and replaced. Want to add in some water in the middle of a dungeon? Easy, just swap around some of the tile tops. You want to surprise players with a terrible spike trap? Just wait until their models move over it, and then replace that tile after its been revealed! 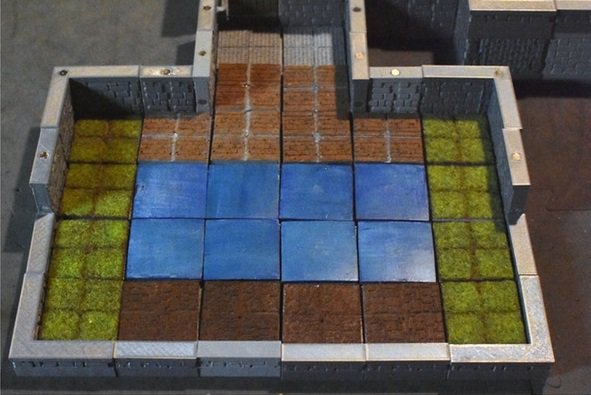 From a picture posted to the Kickstarter, showcasing different tile toppers in a dungeon.

This is the potential of the Explorer’s Terrain system, and its greatest strength. Unfortunately, I have to add a concern here; this Kickstarter doesn’t explore nearly enough of those possibilities… yet. After speaking with the designer, Joe explained that this Kickstarter is a way to fundraise the start of a storefront that will open after the backers of this Kickstarter get their sets. He has a lot of prototypes complete for things such as grass terrain, traps, stairs, all items that would let this system really stand out from the crowd.

Make no mistake, getting a set from this Kickstarter is a great way to get started with 3D terrain, but its really what will happen next that will elevate the system to becoming something truly special.

Magnets, Modularity, And Lots of Possibility Getting In On The Ground Floor, And What Level Is Right For You

As I finish writing this, there are about 48 hours left on the Kickstarter campaign. After playing a game with the set and also messing around with various configurations, I feel like the Explorer’s Terrain system is a solid buy. This is especially for a group that loves tabletop RPGs but hasn’t tried dressing up their table yet with lots of accessories; if your group of friends you get together with regularly wants to try something like this, everyone pitching in can get a set for everyone to enjoy. 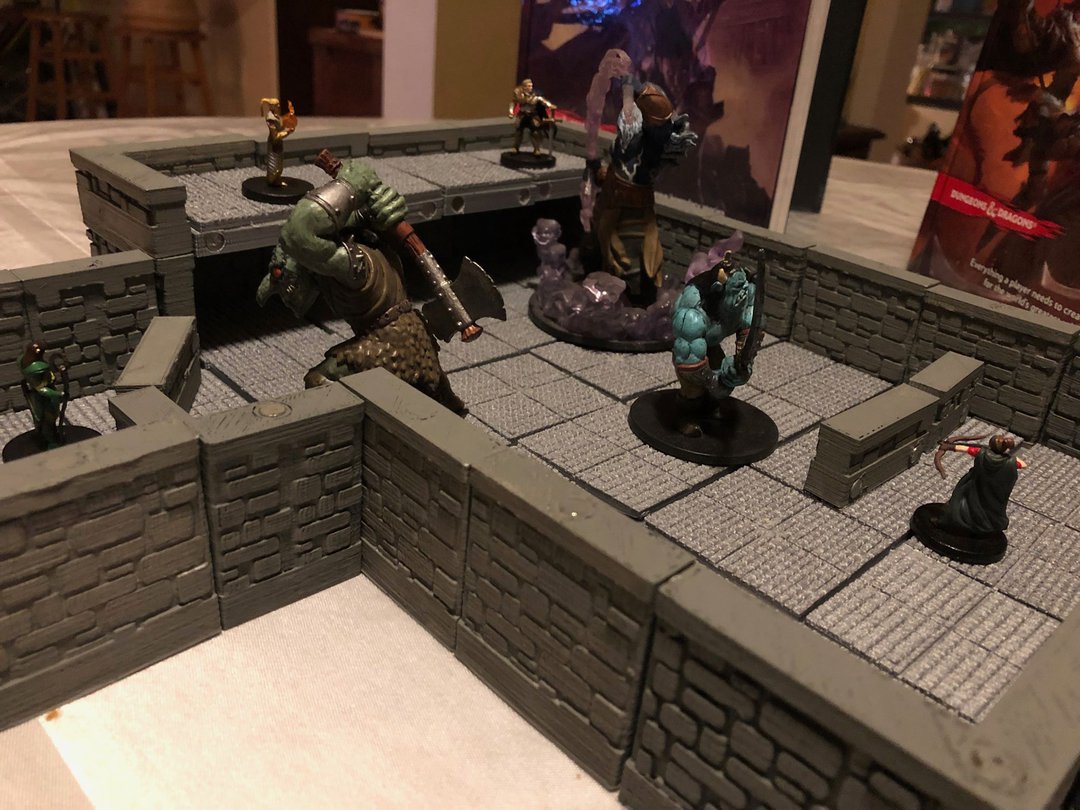 The question is, which set should you purchase?

In my opinion, the two sets I would recommend are the Trailblazers Set or the Seekers Set. Here is my reasoning: the Trailblazer set is fantastic as long as you are not looking to make multi-level dungeons. It only has low walls instead of full ones, but this has a few advantages. First, it means this set is going to fit in a smaller box for transport, allowing for easier set-up and take down. Secondly, having smaller walls lets you frame the game dramatically without making it difficult for players around a table to access all the pieces.

The Seeker set comes with the same about of floor spaces, but comes with both full and low walls, allowing you to create vertical scenarios. These are going to be a lot more dramatic for things like pictures and set ups, but it does cost more money. It’ll also be a little heavier and give you more pieces to manipulate.

There are more expensive sets, and I know most won’t want to spend that much on a terrain set. That being said, I’d honestly be tempted by the Heroes set at $250 just because it practically triples the amount of floor space you get from the Seeker set. This means mapping out multiple rooms, letting you fill the table with a daunting set up for your players to come over to.

Update: Joe just updated the Kickstarter to say that every backer will get some of the alternative tile toppers he’s been working on: some water, metal, grass and brick. While its only a start, change ups like this are a great way to mark spell effects or special zones in dungeons.

So there you have it. 3D terrain is a very rewarding, if expensive, addition to your tabletop gaming nights. If you have a dedicated group of friends you play with every week, it’s a great way to elevate the experience. Take a look at what Explorer’s Terrain is offering while you can: you might find its exactly what you’ve been looking for.